As the Excalibur team launch their new Galaxy Class starship, we grab a few questions with Mark Ward who's job it was to texture this hugely popular ship.

For those who don't know, could you give a bit of background on the Galaxy Class starship

The Galaxy Class starship was first featured on Star Trek: The Next Generation as the U.S.S. Enterprise D. It is one of the largest ships in Starfleet and was the most advanced ship at it's launch. The original studio model was created by an exceptionally talented team at Industrial Light and Magic and was built with painstaking detail to the point that it would hold up in Cinema.

Our version was modelled by Luiz Cordova before being handed over to me for texturing.

How does the detail compare to other ships you have worked on?

The level of detail is really insane! I watched the show when I was a child and have grown up with images of this model but I never appreciated the detail until I started this process. Last year my biggest project was the NX01 Enterprise which at the time I thought was very detailed. By comparison though, the Galaxy has a hull pattern which cannot be mirrored, has a much larger surface area, and more layers of detail.

What difference does this make to the work?

I'm a big believer that even incomprehensible detail has a subconcious impact on whether someone accepts something as real or fake. Because the original model was completely built by hand I had had to draw absolutely every line and pattern by hand. This means that while the hull pattern is repeated in a regular fashion I had to draw it all individually in order to capture the slight differences in the size or angle on each piece. The base of the hull pattern alone is built up of 4 to 5 layers of different colours.

The one good thing about all this detail is that you never have to invent details to fill in the gaps. Where the CGI models sometimes require some creative "padding", these studio models are always dense with realistic details. 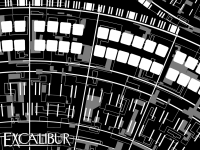 Using edges and fills to break down the textures shows up the detail.


How long did it take to complete?

Around two and a half working weeks in total. Because this is such an important ship in Star Trek canon we really wanted to nail it.

There were many versions of the ship created during The Next Generations run on TV. How did you deal with this?

Yes, it's a bit of a nightmare really! When The Next Generation first went into production they had two models made by ILM, one was over 6ft long and was used for closer shots and the other was 2ft long and got used for more complex sequences where less detail was required. As seasons 1 and 2 progressed they decided that the 6ft model was becoming too difficult to work with and that the 2ft model didn't have enough detail and so they created a 4ft model. Finally, when they decided to film Star Trek Generations they brought the 6ft model back out of retirement and gave it a new paint job.

As you can see, there are plenty of versions to pick from! Some artists try to amalgamate elements from all of the versions but in order to get the most authentic feel we wanted to stay absolutely faithful to one version. The 6 foot model is the most widely praised and has the most detail on it. As a community we are also lucky to have very modern photographs taken of the 6ft model when it went up for auction a few years ago. These are great references and so our choice was obvious. 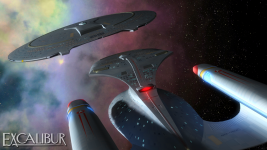 
Was there anything unusual about the process of creating this ship and if so why?

I'm a little unusual in that I like to create my textures using a lot of vector tools. This isn't generally the case because people find it harder to create a desired look with vectors, however I find them to be very forgiving because you can go back and change anything no matter how far along you are. With my last ship I used vectors extensively but not exclusively, but for the Galaxy I challenged myself to use nothing but paths in Photoshop right the way through. As a result we can render these textures out to absolutely any size we want without loosing any details.

The other major difference was that I used "layer comps" to create my different texture types like specularity, illumination and normals. Layer comps aren't very widely used but they have been in Photoshop for a while now, they basically allow you to create various styles of each layer and save them in a different "state". As a result all of my textures are within just one PSD, and I can render out a new set of maps at the click of a button!

The Galaxy class is one of the larger and better known ships in Star Trek. Why did you leave it until now to tackle it?

This happens more often than you would think! The main reason is that when you are developing a game you want to implement things as fully as possible and spend time properly getting your head around them before you put weeks of work into something important. At this stage I knew exactly how to get the most out of Excalibur to make this ship come alive

What were you able to achieve creating this ship specifically for Excalibur that you couldn't have done on another game?

There are some really great features we were able to achieve with this ship; some big, some small and some first-evers! Some of the small things really hold the ship together when you see her moving in space. A good example of that are the windows that sit on the rim of the saucer and the drive section. Because these extend right over the edge of the saucer I had to draw the windows on the sides first before adding them to the "top" or "bottom" of the saucer and manually making them line up. It was a huge amount of trial and error for just a few extra pixels worth of window, but the result is suprisingly noticable and I haven't seen another Galaxy class ship where that effort has been taken. 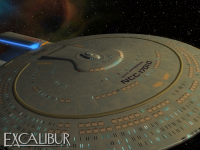 
We were also able to model the bussard collectors (or light bulbs to normal folk) behind the red covers on the front of the warp nacelle. I wasn't sure this was going to be worthwhile at first but a couple of team members convinced me to give it a go. With some work from Michael (Nano) on our renderer we were able to get them looking amazing and the effect is really noticable most of the time in fact.

The HPE also helped us a lot. Luiz (Legacy) modelled the ship including its neck joint and using the HPE we have already got the ship set up ready to be separatable in game. There was a similar functionality developed for Bridge Commander many years ago which took hours worth of tweaking to get things right, where this took literally 2 minutes to put together.

Now that the job's done, what are you most pleased with?

Actually the job's not quite done yet, I still need to make the TNG colour scheme of the textures! But seriously I am just amazed with how the whole thing has come out, and the ship is a real treat to fly in game. She is much bigger than most of the other ships and takes a while to get to grips with, but after a brief learning curve you really feel like you are controlling a huge Galaxy Class starship, and it doesn't get better than that! 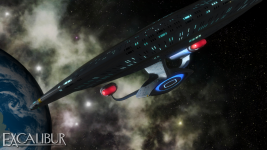 For me the Nebula Class! As for Excalibur, we have some big news coming up in the next couple of weeks about something we are calling "QBUI" and we will be demoing that ASAP.

to much love on this
it's amazing!
that's the diference with others games/mods, that's what makes ST EXCALIBUR unique, superb work!