You want to know what makes Dusk of D.A.W.N. special? In here we would like to introduce the basic features of our game and give you a taste of things to come...

In Dusk of D.A.W.N., a free-to-play collectible card game for your web browser, you will take on the role of a corporation's CEO in the year 2089. Do you have what it takes to survive the battle against other corporations?

Dusk of D.A.W.N. uses the science fiction / cyberpunk theme to its full extend. The game board will be divided into three columns corresponding to the three card types: Buildings, strategies and units. Each turn you will receive funds and draw new cards from your deck, which you can position individually and put into play by using funds. Using your played cards requires proper planning: In each turn, you only have 5 actions at your disposal. Actions are consumed upon playing or activating a card. But there is a fourth type of cards: Tactics. Their effects on the game board are immediate and thus allow you to gain the upper hand and bring the enemy's corporate power to zero.You will decide whether to take the physical or the digital approach which correspond to the two damage types at your disposal. All attackable cards have their individual resistances against those damage types. You are better off attacking and hopefully taking out a tank via the matrix, instead of putting a barrage of gunfire onto him. A soldier is better taken out by using a precisely aimed bullet. 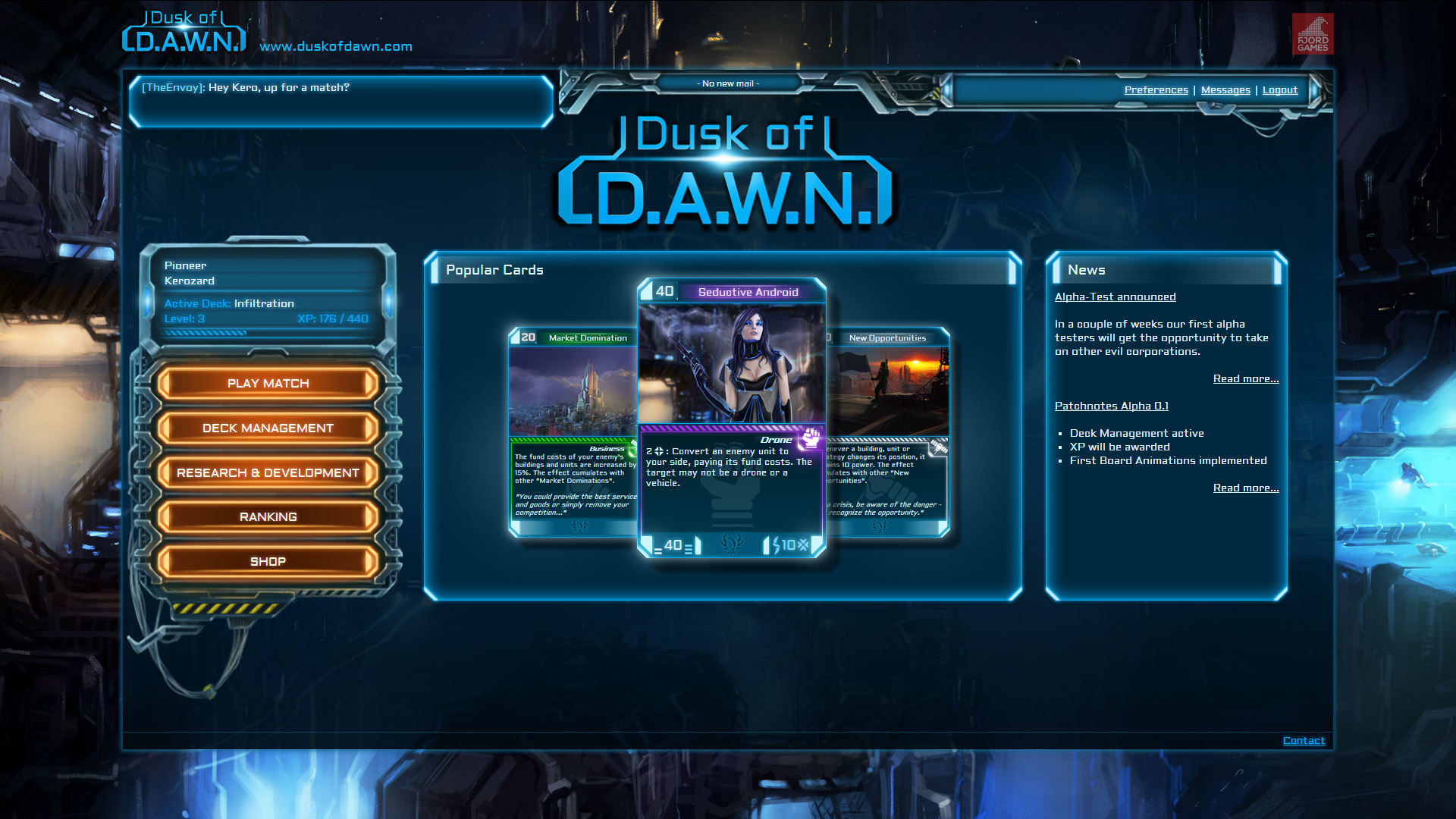 The management and planning of your deck is a central game element of every collectible card game. Dusk of D.A.W.N. offers an intriguing system which also ensures the balance of each deck: The deck capacity. Each card consumes a portion of your deck capacity, with more powerful cards requiring a larger amount. It is important to find the right balance, because if your deck becomes empty in the middle of a match, it will be reshuffled, but your corporation suffers significant damage in the process. This means if you use just few, but powerful cards, it will become vital to play them in a perfect style and to defeat the enemy as quickly as possible.Furthermore you are allowed to assign two buildings to your deck, which will be available at the beginning of the match and count as played out cards.Lastly you will have to assign a division to your deck. Divisions are unlocked by reaching a new level with your corporation. These special cards will provide a passive boost to your corporation and thus allow for greater synergy with your deck cards. For instance, a division could decrease the costs for playing drones, while also increasing the power of all drones. Or your turn-based income of funds could be passively increased. The opportunities are manifold!

You might know the issue: You just bought yourself a new booster pack and as you earned some bad luck, you now own the same card multiple times although you don't need it. Fortunately, there is a solution to that in Dusk of D.A.W.N.! You may consume cards in the process of researching, which will unlock a random new card for you. You choose the rarity level of the new card and select cards that you would like to sacrifice. Depending on the chosen rarity level you will need a minimum amount of points to start the research, while the consumed cards provide a certain amount of points that depends on their own rarity level. If the required minimum amount of points is met, you may start the process. If it is successful, you will receive a random card of your desired rarity level. But even if you fail, you will get a major amount of your consumed cards back. 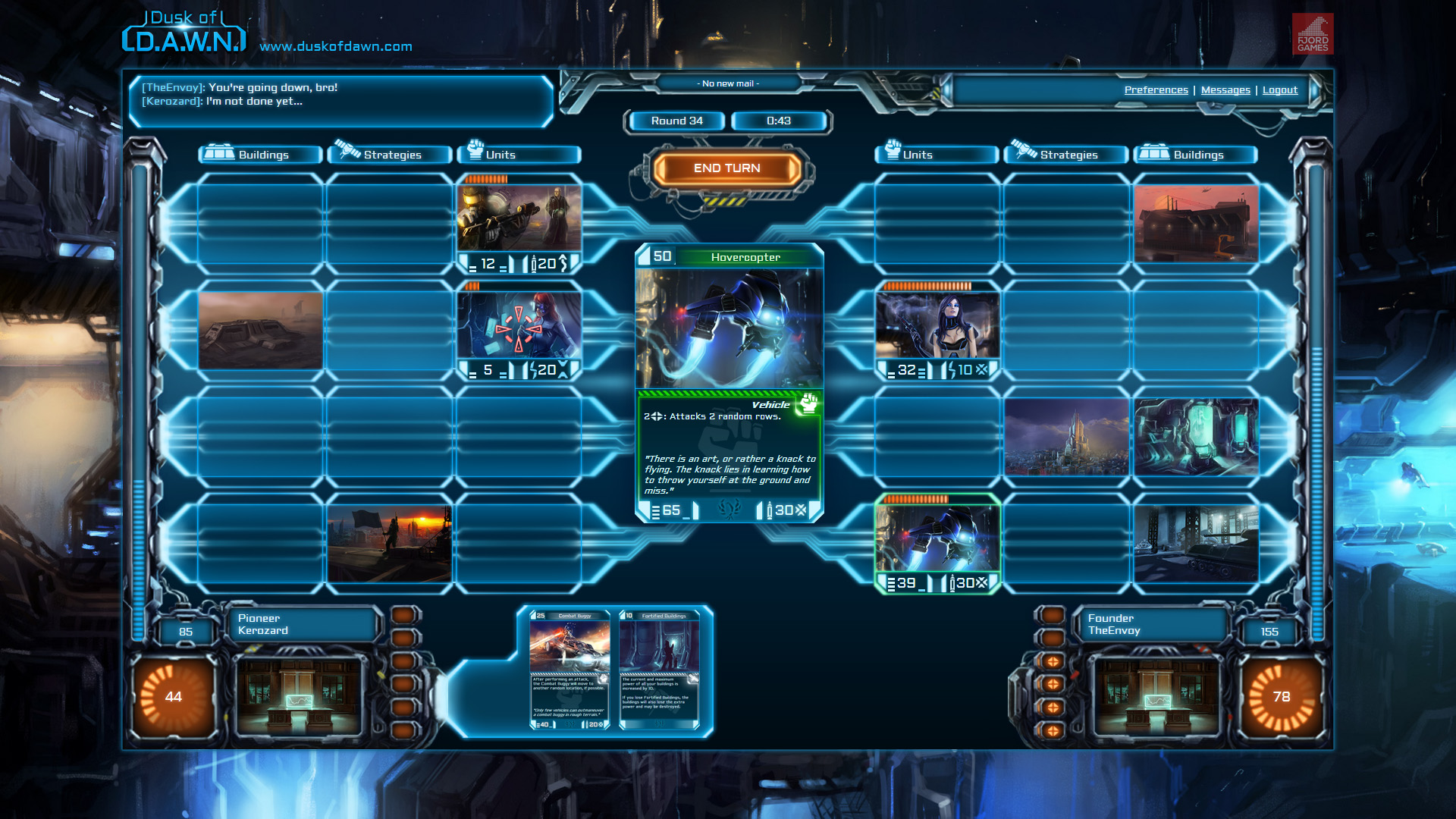 There is no exclusive premium currency! All items of the shop can be unlocked just by playing the game, as you receive "Shares" for each completed match. Even the highly desired legendary cards can simply be earned!The use of real money will just allow you to unlock certain content faster. The shop will include things like different booster packs, deck slots (which allow you to save more individual deck settings), XP boosters to gain new levels faster, as well as so called research boosters which are helpful when researching for new cards.

Usually, when you play a browsergame, you will experience an "asynchronous multiplayer" mode, which means that two players don't need to be online at the same time and see the actions of their enemy time delayed. Not so in Dusk of D.A.W.N.! If you decide to play a match against a real player (instead of facing the artificial intelligence) you will get into our matchmaking system which will put you up against a player of similar power. You will see his actions in real time and are allowed to react in your own turn. Via chat you will be able to talk directly to your opponent.