After a vacation from working on the mod, I am back! In this version, nothing entirely new is added except for some amazingly beautiful units. However, this release is huge, because it fixes many errors, bugs, and balances out the game to be much more enjoyable. This version will serve as a bridge between v14 and the next big release, v16!

Well, in case any of you were wondering.. yes, this mod is still alive. I simply was burnt out after v14 and wanted to take a few months off to enjoy other things in life. However, about midway through January, the itch to mod came back and I decided to kick off 2020 with a bridge release for the VE mod. In this mod, you will find about 30 amazing units between 3 different creators. Also, many if not all of the bugs and issues from the last issue have been addressed. With that, the AI have been balanced a bit better on the campaign, and units are a bit better in battle. Finally, (and we will see how this goes) units are going to be a bit cheaper (take vanilla prices and add $1k) with less upkeep and Mercs won't be as easy to hire! Before I get into everything with more detail, I just want to thank everyone who posted issues, questions and suggestions in the comments here, twc or in discord! I am very lucky to have you all following and assisting in development! 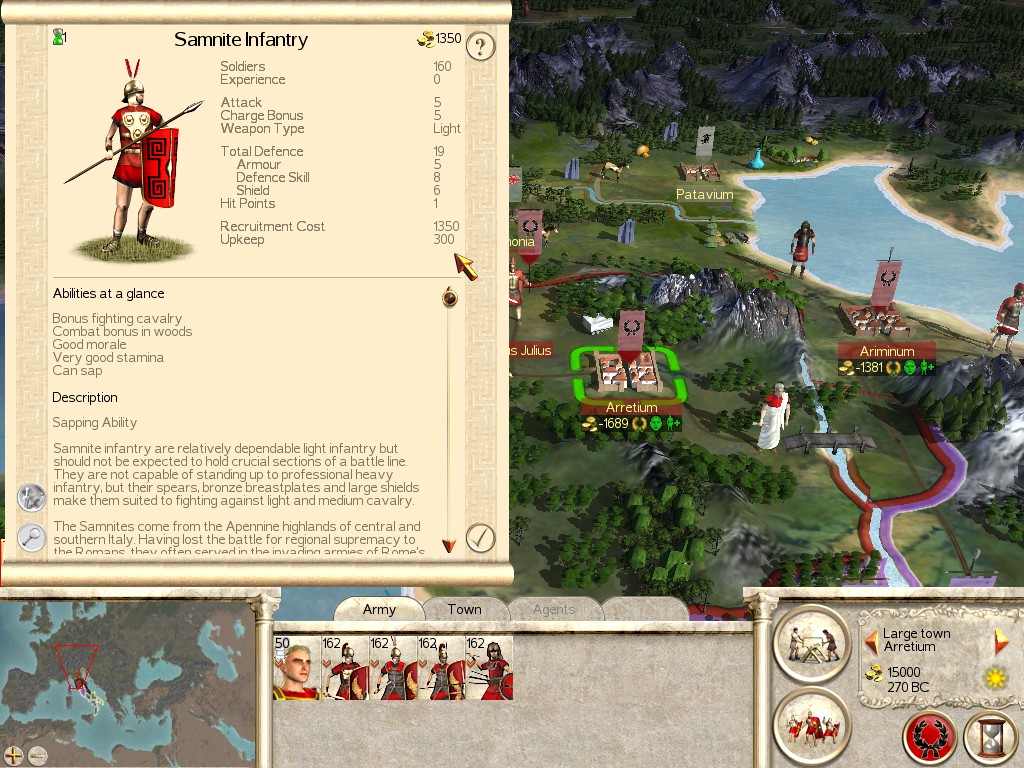 Samnite Infantry are just one of many units who had price and upkeep adjusted!

I will start off with the main topic: prices and upkeep! I actually had a few reports that many liked it, however I think I went a bit too extreme and it made for the following: small garrisons that would lead to revolt, tiny ai armies, ai sitting back, a somewhat boring campaign. Now it's fun to micromanage your campaign, but when the enemy is stumbling aimlessly with small armies of skirmishers and militia, it becomes frustrating! So I heard your cries, and I witnessed the issues myself. Upkeeps are doubled from vanilla, and unit prices are vanilla but with $1k denarii added to keep it difficult. I experimented with peasants, putting them back to normal pricing, and the map was crawling with them! So they are back to 30 turns and 34k denarii to recruit!

Another thing that was noticed and alarming, was 1) The amount of mercenaries available for hire and 2) how cheap they really were in comparison to factional units. They were basically equal in price, could be used immediately and sometimes were better units! Both player and AI had full stacks of mercs, so something needed to be done. What I did, was take out any 'generic' mercenary unit, that could be recruited by a faction. So only unique and powerful units remain. Also, they have been raised in price by 1k denarii, so none of them are equal to or cheaper than factional units! 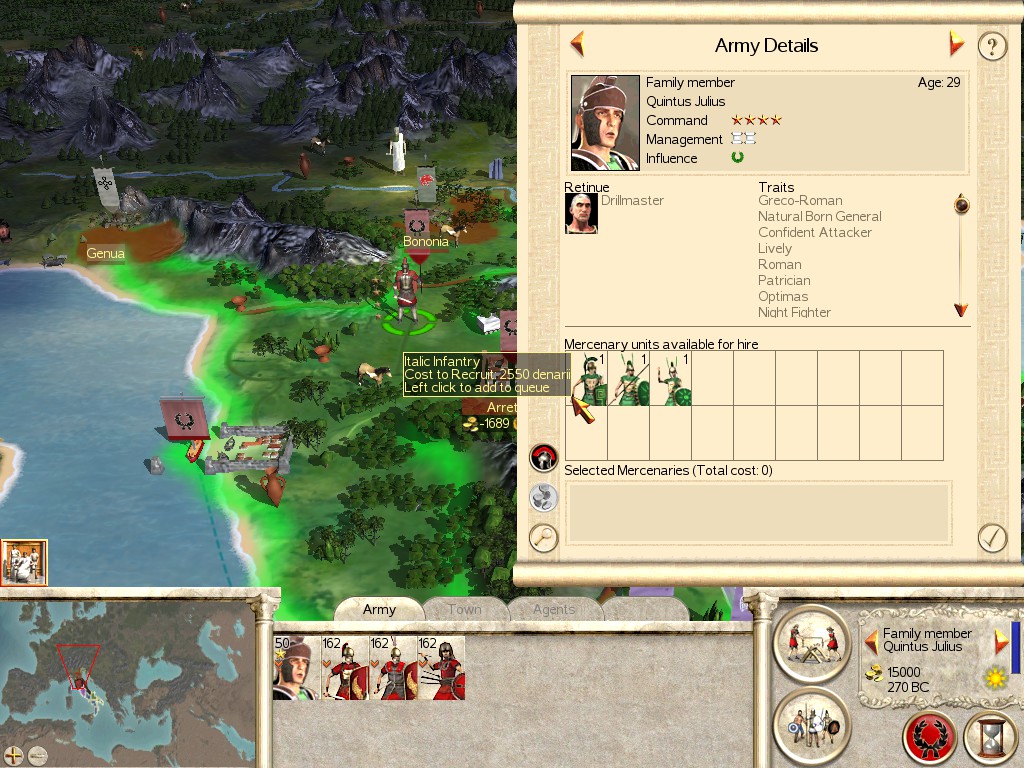 There now will be some thought before purchasing these Italic Mercenaries

Next was the AI. There is a building, Martial Law, that caused many issues. Martial Law and Pacification are buildings that you can build that will basically take away any unrest in a newly conquered settlement, but at a steep economic cost to your nations economy. The AI isn't smart enough and just sees that it makes the local populace happy. So they build it everywhere, but it puts them in debt. The player then conquers their settlements and realizes he isn't economically gaining, but lacking. Even trade grinds to a halt! This has been fixed. You can still build Martial Law, but the initial building now takes 4 turns, costs 10k denarii, and won't yield the results it used to.. Pacification however still yields amazing results if its needed so it's worth getting to. The AI should be totally turned off from it, but if you happen to see it in your campaign 1) delete it as when it's present, you can't build temples and 2) report it to me, as my goal is for the AI to never build it! 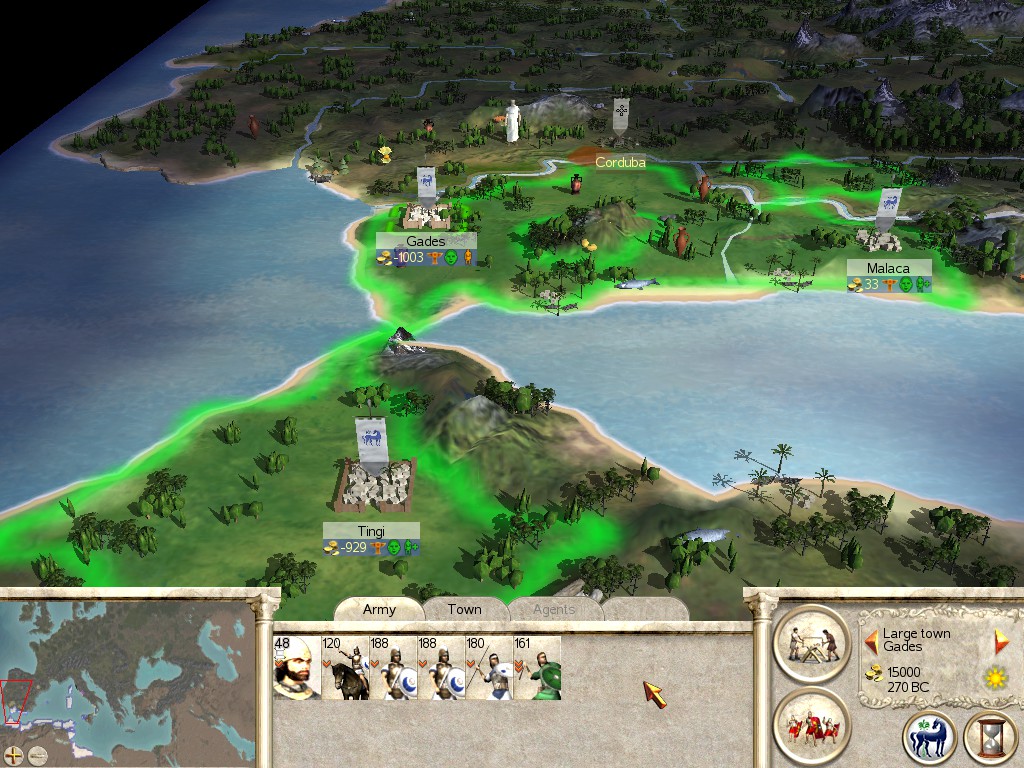 There were two factions who struggled in most campaigns, and they shouldn't as they were main players historically. First is Carthage. They will always handle Numidia, but get kicked out of Iberia and Sicily very qucikly and then just sit in Africa doing nothing until the Scipii start invading them. I made two small changes: 1) a landbridge is now present in the Gibralter so Carthage can effectively reinforce their Iberian settlements (AI resorts to naval transportation almost never). Also, Punic Thureophoroi join Town Militia in Tier1 Barracks recruitment. I was so sick and tired of fighting or seeing full stacks of Town Militia! My only concern now is Numidia, and if they can hold out. I basically let them have Desert Infantry at Tier 1 Barracks, and from T2-T5 give them and Numidian Javelinmen +1 exp. Let me know if they can resist, or if they still need help! Carthage hopefully will do much better.

Second were the Gauls. Yes they are majorly spread out, but I want them this way as they really represent all of the Celtic nations. For them, I simply gave them 3 more settlements in Gaul to hopefully wake them up (before they would sit and do nothing) Bibracte, Avaricum, and Cenabum. Please give feedback on how they do! 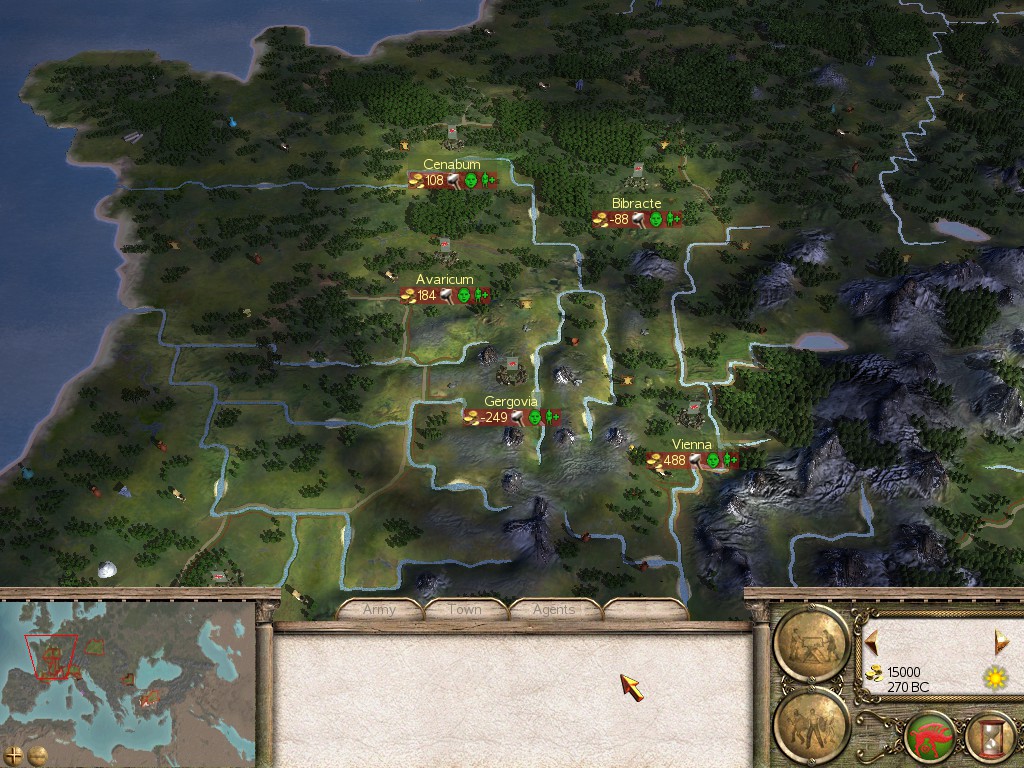 Battles have also been altered and adjusted. First, Hoplites no longer are cannon fodder, they instead pack a punch and aren't easily beaten. There were some stat issues that made them incredibly weak against swords. Second, most skirmishers won't destroy cavalry units, they had some bonuses that they shouldn't have had. Third no more weird charges from forever away. Vanilla charges are back in place for all infantry and missile units. Cavalry still charge from a long ways out. Cavalry should also lower spears, but I need feedback! Last, I have re-added the AI formations from Suppanut. These formations are Darth+Sinuhet, two innovators from back in the day. There shouldn't be any bugs, and I've heard great things about this AI! 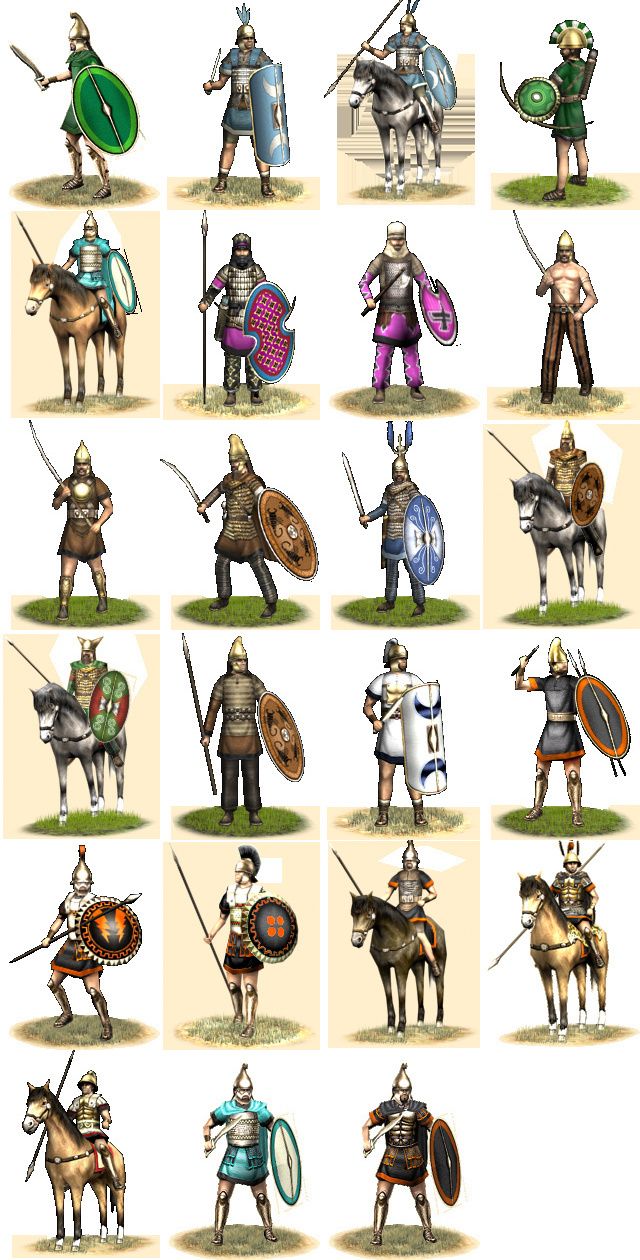 Units Added from Rise of Empire

Now for the units! I have been a fan of a small and relatively unknown mod since 2011, and I have never been able to officially release any of its content until now! The mod is Rise of Empire, and it was made by HK_Mars, a modder from China. It's in chinese and very buggy, but it has awesome looking units. I was able to go through it and pair it's units with historical units. Mausolos was very helpful in writing some descriptions. Here's a list of the new units! (In order in image above) 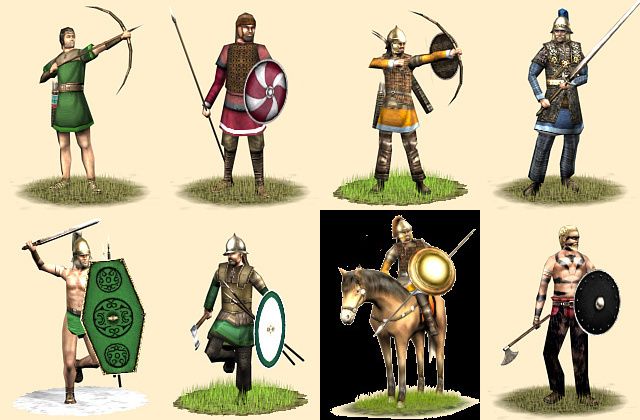 Units added from Medusa0 and Lanjane

These next units are done by a very well respected member in the RTW community who released a cumulative patch of his works in January. His name is Medusa0 and I have always liked his works. Most of his works are unit enhancements, which have also been added. Also, some of these units you might recognize from the early days of VE. They are original VE units made by Lanjane that I have brought back. Slowly but surely they are all coming back! Here are the units:

Finally, here is a list of all the fixes. Thanks to Nicosar and Kaiser from the discord for their amazing and detailed feedback, as well as everyone else in the comments from twc and here at moddb!

- Sprite issues checked, confirmed and or fixed (no more random ctds with Gauls)

- Roman General confirmed to be recruitable

- Upkeeps all fixed and made new

- Britons Temples confirmed to be working

- No errors when facing Parthia or Pontus, playing as Armenia

- Landbridge added between Spain and Africa

- Greek Pikemen for Egypt have texture now, no more CTD

- Marian infantry can now be recruited

- Romans now are not severely OP in auto resolve

- Gauls given Bibracte, Avaricum and Cenabum to last longer and be more aggressive

- Environment fixes and enhancements from Robbe

- HK_Mars of Rise of Empire for the units and unit cards

- Medusa0 for his units and unit cards

- Lanjane for his units and unit cards

- Suppanut for coding advice and his ai formations

- Nicosar, Kaiser and everyone else who follows this mod for the bug reports, suggestions and questions!

- Discord Community for continually growing and showing us that RTW is still alive and well!