A hotfix patch that fixes bugs we found and challenge issues.

How to Install:
You need 'The End Of Days 0.97.5' files to make the mod work!
Download it from here: Moddb.com

Drag and drop files from 'TEOD_0975_PATCH1' inside of your mod folder. Replace the old files with new ones.

If you have problems with installation, get help on our Discord Server: Discord.gg
We will be very thankful, if you support the mod: Paypal.com 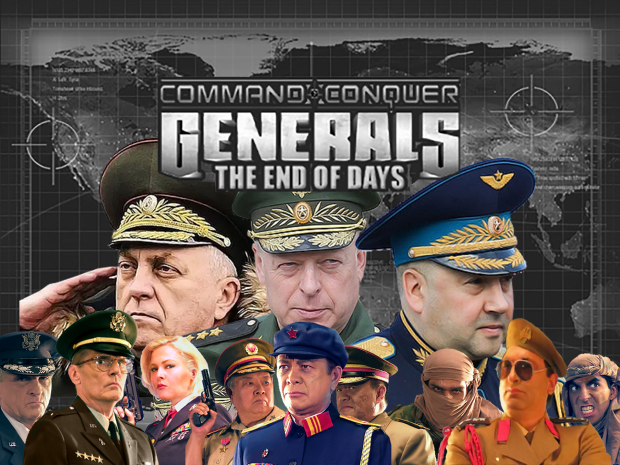 This is patch!, not a full version. You need 0.975 installed before adding this patch. Please install it over old 0.975 files.
I hope we've fixed the most problematic things. Have fun!

Hello, I am a player from China, I like this mod very much and I have been playing it. I would like to know if there was a game crash when I used the Russian side after the mod was upgraded to 0975PATCH1, have you ever encountered this problem? Looking forward to your reply. Thank you very much

How does not allowing for the Firebase to be sold after weapons upgrade balance it?

Because we can't remove the components after selling and they float in air. There is no other way :)

Then return it to the vanilla firebase in that it's a howitzer.

Because of sell button, you are not serious :)

I like the look of the new firebase, so I was refering to the component thing. And if it works.¯\_(ツ)_/¯

Bradley takes 2-3 burst to kill a single infantry, is that intentional?

How much it should take, please tell me :)

I think 1 burst is fair enough or at least make the damage radius bigger since it's shooting air burst rounds. Should be able to damage garrisoned infantry too.

In fact, I think all units with air burst munitions should be able to damage garrisoned infantry as well (Sparka, Marine's grenade launcher, etc.)

But that's just my opinion though.

And speaking of opinions, here's a few more that I hope you consider:

I thought it was obvious at first but you still haven't fixed the Marines using Seals voice lines.

Marine's Grenade launcher should have more deviation on impact (They shoot too straight).

Spetsnaz and Pathfinder stealth condition should be switched - it fits their profile more.

AC-130 Gunship is a little too big (or it should be flying a little higher).

Units MOVE to ATTACK on their own (just to be killed) and sometimes NOT attacking when being attacked (very inconsistent and some units does it, and some don't).
I could go in great detail on how the problem occurs but it would be a very long article and I'm pretty sure you understand what I'm trying to say.

A10 Not going back to rearm missiles when in guard mode.

There's a few more - I just need to remember them all.

Honestly, I just want you to keep the REALISTIC aspect of this mod which we love so much (without sacrificing balance of course).

>Spetsnaz and Pathfinder stealth condition should be switched - it fits their profile more.
logically you are right, but Pathfinder serves a side-purpose of recon, that's why it mostly stealthed, yet Spetsnaz seems to be meant as a "Saboteur-Ambusher". at least that's how i understand mod concept.

>AC-130 Gunship is a little too big (or it should be flying a little higher).
it depends what you compare it to = for RF paradrop planes AC-130 is still like a kid. actually i'd make it even bigger, make it fly higher and faster(GLA drop plane as an example).

If that's the case with the Pathfinder, don't you think the USA has a bit too much recon ? Spy drone, Spy Satellite, CIA Intelligence, Scout Sensor, Search and Destroy... and Pathfinder?

And if Spetsnaz is meant for Sabotage/Ambush - Stealth while Moving or Idle but reveals itself when ATTACKING fits its role perfectly.

But again, just my opinion.

1 burst will destroy the balance, it will be like sniper weapon...
Marine Voice Overs, we simply don't have such. It's not about fixing, but finding voice actors...
Pathfinder and SPetsnaz it's all related to balance, REALISM my friend can't be fully applied for a game.
Units move to attack and so on I told you, check your Option, there is a check box for units being aggressive or not, it's not a mod problem - It's the Retaliation button...

you did good with Spectre size this patch, please pay attention to B52 = same small size and speed problem, comparably to TU160(i understand TU160 may be faster due to special wings, but still B52 is too smaller and slower).

The sniper (Pathfinder), which has a slower rate of fire, could have more range than the Bradley, and vice versa.

Pathfinder: Scout + Picking off enemy one at a time.

Bradley: Up close and personal, Assault and Infantry Support Vehicle. (And a medic aura upgrade would be nice, but I know that's just too much lol)

And regarding the units' aggression, it's not my settings (I've checked everything). The problem is that it's inconsistent - some units are aggressive, some are not. I'll try to reinstall (again) to see if that works.

I really appreciate your replies, a good dev always does :)

Some units like artillery units have the code CANNOT_RETALIATE, other are able to retaliate, this is normal ZH behavior, nothing to do with our work...

Hi Alexei, regarding the units' aggression - I did some research and testing, I think I may have fixed my problem.

Using the Final BIG Editor, I just edited the line on the AIData.ini:

And changed it to:

Now the units is not so aggressive anymore and doesn't move to attack enemies (and base defense) which would sometimes put them in harms way.

Problem is that if there is an enemy behind a building, they will still try to shot the enemy through the building.

But I guess that's better than automatically moving or going around the building just to engage the enemy which could endanger them more.

I hope that helps.

This doesn't make more sense. It makes no sense at all man.

Edit: Took me a while to understand your comment but now I do.

So would it be possible to just give the Pathfinder a silencer and give the Spetsnaz some camouflage so that it would make sense?

Common sense will tell you that if you were to ambush an enemy (ideally up-close), your "stealth" will be compromised 99% of the time regardless if you have a suppressed weapon or not.

The other 1% is if somehow you have to ambush a squad of toddlers.

I only saw your comment today by the way. LOL

My match was RU vs China

observed same strange thing in RF vs China, but before last patch. did check yet if it's fixed.

Maybe enemy radar was deployed and they have huge detection range like 550-600 so...

Well that gonna be a super threat for the drone, i guess we had to accept that or if you can lower detection range a little

If I lower it you will suffer from stealth bombers ;)

nah, drones were "spotted" All Over the map, even right away after creation at base.

Yes it's a bug, left over from old test. I found it. But it's only for the AI Radar. If you play PvP you won't have this problem

yeap, only PvE but irritating as AI send gattling tanks all over map and kills all drones. Hope it will be fixed in future.

It's already fixed, but will see when will release the hot fix

I found something very annoying, for example

I've seen something similar, but IDK why the engine does it... I'll try to find the issue

why superweapons not working on skirmish game?

oh thanks. so its removed all nation? i try on russia,china but cannot find nuclear.

Hi, is there a way to have a shortcut to use with Gameranger ?

The big problem that I do have is that the AI is the Generals standard, not the TeoD AI. Could you help me fix it?

I fixed it. thanks

the navy has been implemented yet?

Are you planning to add a NATO army

If we have more help like 3d and 2d maybe we can make another faction, but since I'm doing almost all models skins and INI codding alone I don't have time and power to do it...

Sorry, but at this point we are not sharing models. After we finish 1.0 I think will be ok to share models with other mods.
BR