Add file The End of Days 08 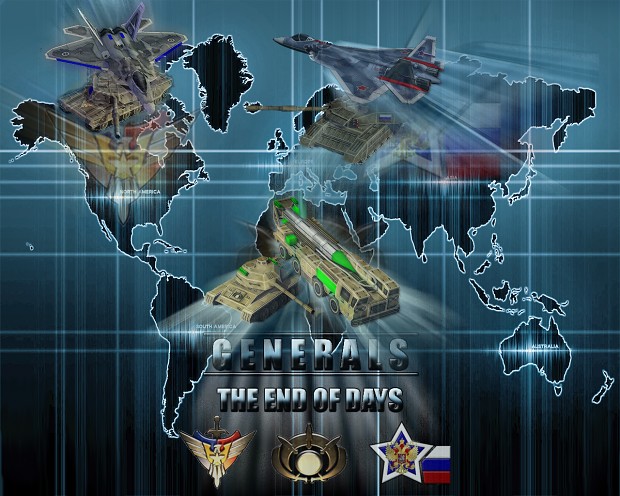 Is it compatible with other mods?

No generals mod is compatible with any other... maybe ENB series, but that's all

Not compatible, I don't have skills to do all alone...
If there was more people wanted to join and help me will make wonders :)
I need talented 3d and skinner to help me with china. I need voice actors...
The project looks a lot better now, but I need more help to finish it faster :)

I'm pretty sure that only mods with launchers work, because .gib files are turned into .big when you launch it, which bypasses the usual 1-mod only.

First thank you very much ALEXEI Stukov. I hope- everything will be so professional. I hope will bring a new and better standard.LET GO IS TESTING

thank you very much ALEXEI Stukov. A Great Job.

Thanks to all, if you find bugs and other wrong stuff, please make good report on PM, as I sad I didn't had time to test it...

It's actually very stable, played 4 battles without any problems.

this mod looks super for me i played it 1 time no bugs 2 times no bugs 3 times no bugs i played it 4 hour long still no bugs u did great work would you add a mh-60L thats a blackhawk with miniguns and rockets and maybe c-130 c-17 and many other controlable planes would be mega awesome i hope th is mod will be the new art of war the best mod ever lived but never completed it dead now :'(

guessing there is no NPC AI, as they build basic buildings then do nothing.

Read well read me file there is manual how to install AI.
Please read well and follow !!!

thanks no clue how I missed that.

I waited too long and I can't wait.Play NOW! Thanks Alexei_Stukov.

Game is good, thanks man! :D
ah, why i don't see the Navy like your pictures that you posted before? :)

in your mod everything is perfect!!! but only one missing is the reality. For example MSTA - Coalition at the moment of shot even reeling

Can you show up on Skype sometimes? Congratulation to release!

I decided to improve the trucks, but for future can easy change them to latest version of S-500 truck or earlier maz 543M...
Remember this is 08 until 1.0 we will have 0.9. Some units and upgrades and so on will be improved. China will be back with whole new units and skins. And in 1.0 if I have time for it will have and naval units...

Good job, but there is no navy?

it's really nice to see a new release, great job!

If someone wants to try MP, join my hamachi network Network:1 (password is same as name), or find me on skype.

It will return in version 09. I didn't have time to make all new units for it...
You have to know that I'm working almost alone on this project!

If someone wants to try MP, join my hamachi network Network:1 (password is same as name), or find me on skype.

I can read readme, I don't have window office.

Download Libre office, open office, or any other free alternative.

I sent it to you on PM

I really like the new textures and the ultimate mode. Talking about bugs, I noticed it seems like hinds rocket barrage does almost no damage to vehicles

In later version maybe will remake them :)

yo Alexei u shud make a fortress structure 4 each faction, if ur up 4 it i can draw sum designs for u, ill try da use bits off ur other models so u can make them quicker aswell, just an idea mate ;)