After years of work, we've finally reached the point where we are nearing completion of the development of the Arm and Core and ready to begin focus on the inclusion of the Talon race into TA:Escalation. This Beta, in a sense, represents the halfway point for us thus far (hence Beta 5). The last 3 years have seen the merger of TAWP and the Arm and Core portions of the Talon Project lead to the subsequent emergence of one of the most successful TA mods in this latter day age of TA. Over these years we've introduced a lot of new units and improvements to the game, but we really have to say that the most enjoyable aspect has been meeting all of new folks to that have joined the community. A lot of folks come and go, but there always seems to be fresh faces coming in along with old familiars stopping by to say hello.

OK, anyway, enough of the sentimental chatter. What is this release all about anyway? We'll for starters (and for those of you who have not played the test betas) there are a lot new units:

There are also a lot of changes, including (unfortunately) what we hope is only the temporary removal of the deflective Shield Generators. As much as we loved these showcase, unprecedented units, they have not proven entirely useful or even effective to date. We will be reworking these in the background while we also work on the Talon add on. For those of you that skirmish, you will no longer find the AI so easily won over now. Now our new 'Nightmare' (by Nightmare of course) AI will attack (and cheat) like none other, and will kill you happily as it does so with hordes of units, strategic cannons, and even nukes – good luck.

So now the Talon can finally get started! This does not mean Arm and Core will stop seeing changes or improvements (the multiplayer community can expect to see continued balance tweaks based on game play), but we've finally reached a point where we will now focus our creative efforts on delivering what we set out to do a few years ago. Today, that journey begins anew!

[As with other major beta releases, we've cleared the change log - those of you in the recent test betas can reference those for change details] 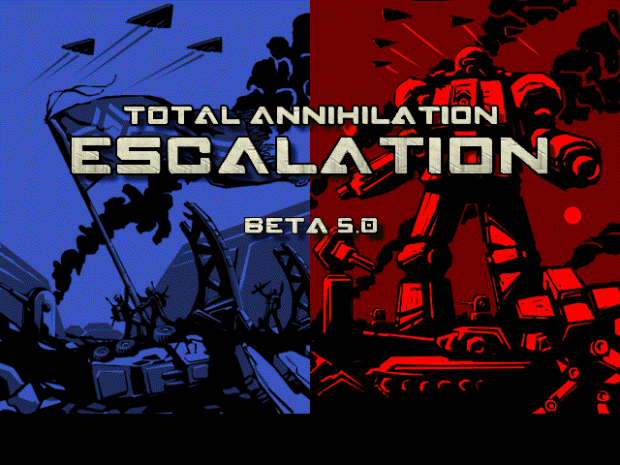 Nice :D
Plays better without the Deflective shields and the new AI is quite... interesting :P

Also i recognise the menu music from somewhere, thought i was imagining it lol. cant think where ive heard it or some thing similar before lol.

Really good to have you here.
Though after 13 years, I can still fun in this game.
You've done a great job!

BEST MOD OF TOTAL ANN EVER !!! AND WORK IN THE VERSION 3D of TA too BUT SOMETIMES CRASH :/

TA is far easier for me to play & manage than that Supreme Commander. SC is too enormus and vast that i cant really grasp that huge scope in rts - if only they made it watered down then things would be alright. As it is, TA and its mods rules!!! Is TA E compatible with the TA_Bugfix1-6_to_1-7_changes v1-7b6 ?

when are you guys gonna upload the last release? please dont quit on us when its almost done.