STARDROP - CHAPTER 1 introduces the player to the main characters while setting up some of the story elements.

Chapter 1 is released to get feedback and to start building a community around the game. Chapter 1 also includes a bonus map that utilizes the game mechanics in a different way that hasn't been highlighted during the actual chapter. The bonus map will be unlocked after completing the main chapter.

There are still other aspects and game mechanics that we will not be able to show you at this point simply because they're still too early in development.

The content in this chapter is still work-in-progress but it has been polished to an extent that the only real changes in the future of this chapter will mainly be optimization and further polish. 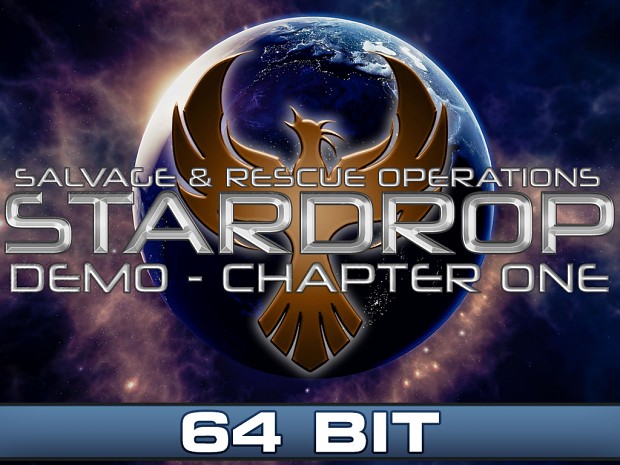 Hello there, I thought I'd give you some feedback so here's my review of the demo:

The first thing to notice about this game is that it's graphically good. There are some bad collisions here and there, but it runs pretty smoothly, so nothing unbearable.

I was able to play with my headphones on and was surprised at how I was suck into the game, pretty immersive, good sound design and an overall good atmosphere. Oh, and some ship details are very good too, like those spinning reactors outside of the ship that makes the whole thing alive and realistic. The only flaw is the animation of these synthetic robots that is quite raw and feels unfinished but then again, I completely understand that the game is far from being finished, I just want to mention it in order to make my review as exhaustive as I can.

Besides these good points, I could not finish the demo (is there an end to it?) because of bizarre scripts I assume (?). First of them, when I got my suit, I could not figure out what to do next, nor was it mentioned on the journal. I walked through the entire map and later came back to the suit room and was finally told my objective and how to use the suit. In a second time, I was unable to figure out what I had to do with the broken monitor as I watched at my journal and again no clue was given about the objective, only hints for the scanner vision were displayed which I did apply but it didn't help much. I also tried pressing E in front the broken monitor but it didn't work. I ended the demo here because I had become clueless of what to do next.

Although there are some minor technical issues which may not be a problem, the Alien feel to it and the immersive atmosphere makes me want to follow this very closely.

So far, so good. Keep up the good work.

Sorry for the late reply.

The first bit you got stuck is something I am wanting to improve. It's one of the first scripts I wrote and after more people playtesting I rewrote it, while an improvement I feel that I can do much better so I will give that another go at some point. (Obviously, well before its release)

The second part where you got stuck is another area where I find the dialog isn't to the point enough and basically suffers from the same flaw as the one mentioned above, that its just too much words.

I want to mention that from what I can tell about your description, it seems you ran into one of the very few bugs that we werent able to replicate. So while it is a known bug, at the time I could not fix it. That said I found out how to replicate it and attempted a fix for it, hopefully once I get the latest build out to Sensi, my amazing Playtester, I am able to confirm if the bug is fixed.

I apologize for being one of the few to encounter it, as I have been and continue to aim to have the demo as bug free as possible. And a bug like this would never fly with me for a full release.

I am currently working on an extended version of the demo, so might wait when I am able to release it which should offer a lot more gametime. :)

Thank you for the kind words, I'm very glad you enjoyed what you played and I'm working oh so hard to raise the bars on a personal level.

Ohh, and the androids certainly need an animation overhaul which is something that we'll get to. :)

I love what you have so far. It is GREAT. It runs really smooth, great graphics, but one thing that really bugged me was no full screen. I had to play in windowed mode. Also, it'd be nice if you could make the course to your objective more apparent, as I got lost in the maze known as the ships interior. I cannot wait until the full game is released. It has a great story, and I was so mad when I realized I had completed the entire demo, including the bonus level. GRR.

All in all, keep up the great work.