Finally the wait is over. A new chapter theme in the Star Wars galaxy awaits Star Wars fans. Choose to play the Empire and conquer the galaxy with large fleets of ships and hordes of Tie squadrons, or the Rebels with their unconventional and daring tactics along with new heroes such as Dash Rendar, the Outrider, and Jenna Nightfall. Meanwhile, the corrupt side is ready to emerge from the shadows once again and take hold of the galaxy under the sway of the newly formed Consortium of Criminal Networks (CCN) led by Tyber Zann, Jabba the Hutt, and Prince Xizor. Together they form a deadly alliance along with a newly formed regime on Geonosis headed by Archduke Prago the Lesser to fight with Rebel support against the Empire in the Liberation of Geonosis. This mod represents the trying times mainly between the events of Episode IV: A New Hope and Shadows of the Empire. All three factions are ready for war, the question is which side will you play first upon downloading this mod...?

Thanks everyone for supporting this mod. I hope you enjoy it as much as I did in taking part to develop it. With luck, I plan to release a later second version of the mod (that will have an actual campaign or at least new corrupt story oriented missions), but for now I hope all of you will really enjoy the first version of the Rise of the Shadows mod for now. 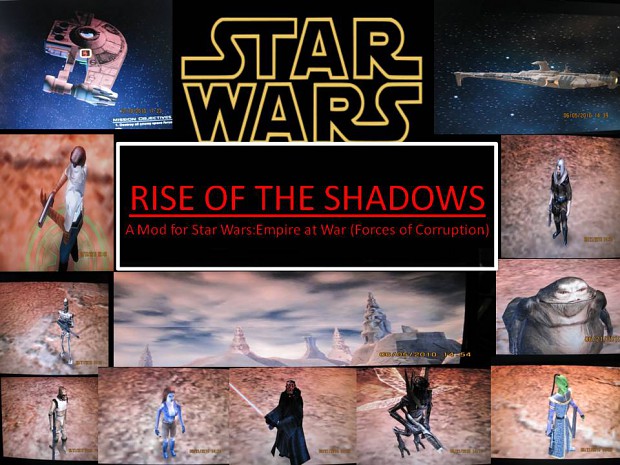 wohoo "I would like to acknowledge and thank: dj5555 and Admiral-Ace for answering alot of my questions in modding" now if only i had my FOC to play it, but i still got it first. ill be playing this tommorow after i re-install my FOC

Thanks, I hope you enjoy it.

@Galen_Marek: That's a good question, I think I had the same problem when I clicked on the download button and something popped up saying "The file you have selected (RiseOfTheShadowsMod.zip) is not available via any mirrors. Please check back shortly as our servers update every 5 minutes. If you have a webserver with space, contact us about providing a download mirror. Your companies banner will be shown thousands of times daily here and supports our game development community." I don't know what this means but if I see this again by tomorrow morning American Pacific coast time, then I will try to contact someone working at moddb and ask them how to solve this issue. I would say for now wait about 8-12 hours and then try again, since this is a big mod site and it probably handles a lot of loading and processing stuff. If that doesn't work by then, email me a message telling me through copying and pasting what the message error/issue said in preventing you from being able to download it. Again I apologize for this, but I think it's just a processing issue that may resolve itself in a few hours.

Anyone who has problems downloading the mod from moddb, I have an alternate site from which you can download the mod on file/gamefront.com. Please click on the link below and it will direct you to the page to download the mod. Here's the link:
Gamefront.com

Btw, I apologize to everyone for any downloading issues, but this is the best solution I can offer until moddb has made the download available for all of you without any downloading technical issues.

really good mod,but darth vader doesnt build in space skirmish the icon is there but does nothing,and have to say the look and playability is gd,just needs a lil balancing,great work honestly really good

@lptpsteve: Yeah, sorry but just to clarify this mod is intended to work only for the single player (and maybe the multiplayer)galactic conquest campaigns. The skirmish modes is something that I did not make an effort to work on. In fact I don't even expect the skirmish modes to work. Vader was originally buildable in the Absolute Corruption 2.4 mod but I made him unbuildable, and programmed to be an automatic hero for the Empire in the galactic campaign mode for the Rise of the Shadows mod.

Btw, thanks for playing the mod. I'm glad that you seem to be enjoying it. I plan to work on the balancing and other improvements when I make the second version of the mod, but that probably will not come out until next year more or less.

Just me personally, but I like to try out a new mod in skirmish first to see what is new about the mod.

Very interesting. I had a lot of fun on the Bothawui corruption mission with all the normal ZC heroes spawning additional units =p

Important Note: If anyone can RESPOND, did the Rise of the Shadows mod if you play the Consortium faction have these 3 things in the campaign mode?:

-1.Prago the Lesser shows up as a hero and his icon is at the top right corner of the mod next to the other Consortium heroes icons on that galaxy map screen.
-2. Geonosian Nantex space fighters are buildable at level 2 spacestation on one of these planets (Geonosis, Vergesso Asteroids (though it's not actually a planet), Korriban, and/or Hypori.)
-3. Sith temples are buildable for the Consortium on one of these planets (Geonosis, Hypori, and/or Korriban)

If these 3 things on the check list show up and work, then that means the mod worked right when you downloaded it. Feedback on this matter from those who downloaded and played the mod is IMPORTANT and would be appreciated. Because it took 4-5 test downloads for me to figure out why these things didn't happen until I did figure out why. It's probably just my computer which I figured it out how to fix the issue. Thanks.

Well, I didn't try the campaign, but I did try a GC, if that difference matters. I can confirm 1 and 3. 2 I don't remember.

Thanks, yeah I meant GC when I said campaign. Sorry, I need to watch my wording that is kind of a big deal. If you don't remember question 2, but you do for 1 and 3, then that still sounds like a good sign that the mod worked right. I could have asked over a hundred other different questions of what showed up to make sure the mod upload worked right, but if at least one of these things happened then I know the mod most likely worked right. If anyone else can respond to those 3 question line items please to do so. I just use this as a basis to make sure the mod played as it should, and didn't load up as the Absolute Corruption mod 2.4 which didn't have these 3 question features.

Awesome Mod! Just have to wait 21min 13seconds for it to download XD!

I'm kinda new to the Mods thing, but I installed this, clicked the icon and I get a grey screen, followed by my computer locking up. What am I doing wrong?

I like the mod but i think zan hero with prince xizor and jabba is weird since they arent warriors. Also i think they are OP since i beat an army with jaba XD.

I would use Xizor and Jabba as field or space commanders rather than OP units.

everytime i try to launch the game using the shortcut provided a message comes up saying the target field is not valid/cannot be found, (right click shortcut>properties>shortcut) the target field is
"C:\Program Files (x86)\LucasArts\Star Wars Empire at War Forces of Corruption\swfoc.exe" MODPATH=Mods\RiseOfTheShadowsMod
and the Start In field is
"C:\Program Files\LucasArts\Star Wars Empire at War Forces of Corruption"
but of course that isnt the steam location, anyone know the correct target field for steam?