The Empire has fallen and a New Republic is born out of the conflict. But in the ashes of civil war, yet another life stirs... A complete remake of Empire at War: Forces of Corruption, including new units, effects, audio, maps, shaders... You name it, it's been remade. New mechanics make for more immersive play and the totally new Mandalorian faction replaces the Zann Consortium in this mostly lore-friendly unofficial expansion mod.

RISE OF THE MANDALORIANS
A mod for Forces of Corruption

Delete all previous versions of this mod. This is a standalone version!!

Simply delete all files to uninstall.

If you have other mod files in your FoC Data folder, these will override anything that's in the Mods folder, so remove them or this mod may not work correctly.

These install instructions will also work with Steam but it will be considered a "local" mod, separate from any Workshop content you may have installed.

Please feel free to use any assets contained in the mod for personal use but if released publicly in your own mod, credit must be provided to myself or to the folks in the "credits" section below when applicable.

I am not liable in any way for any damage, loss of data, virus, malware, or any other harm that may come to your computer by installing and using this mod. As with all 3rd party software content, this is a "use at your own risk" agreement. Best efforts have been made to ensure that content will work correctly and without issue. 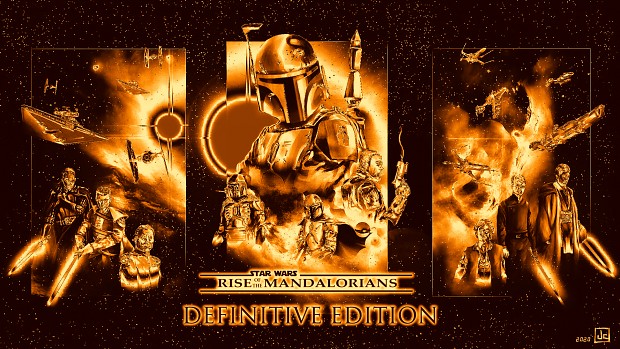 Thank you for the years of support, for the endless patience, for the constant feedback (the good and the bad), for voting enough that RotM placed in the top 10 in last year's Mod of the Year, for playing and enjoying my labor of love. With galactic conquest now released, Rise of the Mandalorians comes to a close. The project, in this Definitive form, is now complete.

Actually, you made a left when you should have made a right. That was in fact, the wrong way.

Are you going to update your halo mod or work on it?

Holy halo music plays as this gift is bestowed on us

Thank you for your hard work and dedication seeing this through to completion. I can't wait to try it out.

I am so happy and proud to have seen this project evolve from start to finish, you truly are one of the best modders in my opinion, the_Farseer.

Oya!!! Holy crap this is awesome! I'm sad I won't be able to play it until monday

Wow! was not expecting this so soon!

Can't believe the day is finally here, after so many years. Thanks for your dedication and hard work; now if you'll excuse me there's a galaxy that needs imperializing.

Hey Farseer. I tried the Galactic Conquest as the New Republic and a lot of their units don't seem to be buildable

So far I count the CD-10 Destroyer, All of their corvettes, and the T-47 Airspeeder

Ill check it out. The cd10 should be buildable on any planet that builds capitals. The others, im not sure on.

Man i remember being 15 like 6 years back and thinking "man 4 YEARS and still no new version it has to come soon right?!"

Great job far. Will always love you. Please cpntinue to upload some screens here and there so i can goof around in the comments.

every journey has an end, but not all journeys end this awesome.

I have problem to build Victory and ISD. How can I find a solution?

Its a bug. Im addressing it. The moddb release will get one, comprehensive bug patch when all major bugs are identified and fixed. For hotfixes, pleass use the steam version.

Love the mod, amazing work :)
But I cant load saves am I doing something wrong?

Mod saves are notoriously unstable. Also, if you are using steam, i keep updating it to fix bugs, which might be breaking saves.

Had the same issue. Copy paste from what I posted on steam:

Then, I went to my steamapps/common/EaW folder and set "runme2.exe" to start in compatability for Windows XP Service Pack 2.

But this deleted all my saves! Except it didn't. Oddly, when I'm NOT in compatibility mode all my saves were in:
C:\Users\*name*\Saved Games\Petroglyph\Empire At War - Forces of Corruption\Save

HOWEVER, since I started running compatibility mode my saves load, but now they're in:
C:\Users\*name*\AppData\Roaming\Petroglyph\Empire At War - Forces of Corruption\Save

Apparently this is related to read/write rules. Doesn't make much sense, because I am the only user and the admin for my machine, but whatever. If you go to

and open the PGCrashCollector you may see an error. Error code 0x80070005 is what I had. It seems to be related to read/write issues based on my research.

Superb work, the_Farseer! I am downloading now and can't wait to experience the full power of the Mandalorian side.

Woot! Thank you for all the work you've put in over the years!

I created a 'Mods' folder in the FoC game folder.
I extracted your RotM into that folder.
Started the game, nothing appeared changed.

You need to also launch with a custom shortcut, which has the "target" edited to include MODPATH=Mods/RotM at the end.

This shortcut should have been included with the download.

No there was just the RotM folder. Inside there was a Data folder, and inside that several .MEG files and several other folders.

No shortcut or instructions.

EDIT: I downloaded an older version, allowed me to understand the pathing to the mod, made a new shortcut to the FOC.exe and it works!

Awesome! Glad you got it sorted out :)

Yeah I'm also unable to load GC saves. I'm able to do so in vanilla without a problem. Even if I jump into a GC for five seconds, save, and try to load that save it crashes (it does not with vanilla).

EDIT 2: //The below probably doesn't work, but leaving it here in case someone wants to try anyways//
EDIT: May have found a solution? My copy paste from my steam comment: Ok so I think I got it to work? First, I set the game's launch options to STEAMMOD=1780988753 so it would start up into the mod.

Then, I went to my steamapps/common/EaW folder and set "runme2.exe" to start in compatability for Windows XP Service Pack 2.

But this deleted all my saves! Except it didn't. Oddly, when I'm NOT in compatibility mode all my saves were in:
C:\Users\*name*\Saved Games\Petroglyph\Empire At War - Forces of Corruption\Save

HOWEVER, since I started running compatibility mode my saves load, but now they're in:
C:\Users\*name*\AppData\Roaming\Petroglyph\Empire At War - Forces of Corruption\Save

Apparently this is related to read/write rules. Doesn't make much sense, because I am the only user and the admin for my machine, but whatever. If you go to

and open the PGCrashCollector you may see an error. Error code 0x80070005 is what I had. It seems to be related to read/write issues based on my research.

I tried that too but even though the saves load now the game still crashes after a few seconds.

Yep, I was able to load some testing saves, but after attempting to load a 2 hour session or so after dinner it would pop in and then crash after a few seconds.

Many others are reporting the same issue. It's being looked into.

Do non-modded saves work fine for you? Mine do.

I may have identified the issue and am testing a fix now. However, your research here is very interesting. Going to run it by some folks and see what we can make of it.

Hi,i created my own shortcut cuz it was missing in Rotm, did that MODPATH=Mods/RotM target,it will start only vannila. i even tried foc launcher same only start the vannila.... Last versions of this mod worked perfectly fine no problem whatsover even with foc launcher. I just dont understand what is the problem

I have GOG version....love this mod btw just sad i cant play this version
Sorry for my bad english.

The mod should work with the GOG version but to be honest, I haven't tested because I don't own it. That said, the Steam version is usually really cheap and Petroglyph has pushed some updates for it that are really nice. If you had the money, I would invest in the Steam version. There is even a rumor that Petroglyph has even more updates in the works, to fix bugs and enhance certain features. Mods have kept this game alive and the original devs are noticing :)

Hello I put this mod into the mods folder of corruption. And no matter what it does not show up in the game under the Mods option. Can someone help me out please?

If you are playing on Steam, subscribe to it in the workshop rather than downloading here.

Excellent update! Just few mistakes:
-The Victory MKII should not have the ''wings''.
-The Assault Frigate MKI, The Peregrine and Marauder shot green lasers instead of red.
-The R-22 have TIE Fighter pilot voices
- B-Wing do not change to his attack position

I need help. crashes on start up how do I fix??

Could someone help me since when I start the mod, it gives me the original game and not the mod. does anyone know how to fix it?