IMPORTANT NOTE: Reinstall this mod if you have it already. A new file version has been upload to replace the last one. This fixes the Sabaoth boss killing the player with one BFG blast, and increases rocket launcher damage. To update, simply install the mod again, and replace the Overzealous folder in your Doom 3 directory with the new version you just downloaded. Doom 3 Overzealous, over the top, overpowered. Whatever you want to call it, this mod does what every other Doom mod does; tweaked weapons. But, there's a twist. With every buff, weapons have a nerf. Enemies are stronger, too. With edited weapon sounds, firing effects, weapon textures, and stats, you'll still play Doom 3 the same, but you'll never see it the same again... Don't deny it, and don't be afraid.

IMPORTANT NOTE: Reinstall this mod if you have it already. A new file version has been upload to replace the last one. This fixes the Sabaoth boss killing the player with one BFG blast, and increases rocket launcher damage. To update, simply install the mod again, and replace the Overzealous folder in your Doom 3 directory with the new version you just downloaded.

This mod does not work for RoE as far as I know. Try that at your own risk until I test it out.

-To install for Doom 3, open the zipped "overzealous 1.1-zip" folder you downloaded. Inside, there is a folder named "overzealous 1.1 - Copy - Copy". Take this folder and copy and paste it or drag it into your Doom 3 install directory, (the place on your computer where you have doom 3 installed). Once the folder is extracted, run Doom 3, go to open your mods from the main menu, and select Overzealous 1.1.0

Load up a new game or map, and enjoy. Make sure you have ALL pk4 files from the Overzealous folder in order for everything to work properly.

-Notify me of any bugs or crashes that occur. I'll try to get back to you as soon as possible.

You can reach me at sgtzpp33@gmail.com, or comment here on this mod page.

All changes made to gameplay:

- Cyberdemon can now be hurt and killed by all weapons. The Guardian is still untouched by normal weapons.

- Added new weapon, the Unmaker, in the form of the Super Shotgun. It spawns in Mars City Administration when you first encounter the Pinky Dog demon, and in Delta Sector 5 after you return from Hell. Because of how powerful it is, (read its stats below), it also spawns with no ammo, but it always spawns close by hand grenades, which is the ammo it uses.

- Most monsters have had health buffs. Cacodemons, Revenants, and Imps have had increased speeds on their projectiles, and greater explosive radiuses and damage + splash damage. Z-Security zombies with machine guns and shotguns and Zombie chaingun commandos now fire imp fire balls to look more demonic in combat and illuminate their positions so the player can see where they're being shot from, and shotgun zombies have a tighter spread. Most enemies have increased melee and ranged attack damage and severely punish the player for not paying attention and having poor reaction time. The less time you spend shooting enemies, the more they attack you and the more damage you will take as they do so, so use these buffed weapons to your advantage. Even with their increased strength and your increased armor, the increased strength of monsters can still kill you very fast if you don't react on time.

- Sentry bots now have heavily decreased health, lower damage so the player can't rely on them as much, and bots now fire plasma projectiles.

1. Pistol now has an increased fire rate to make it as fast as a USP .45. Gave it a stronger firing sound and new texture.
2. Shotgun now fires in full-auto, and fires a slightly accurate incendiary plasma slug round, but with lower damage per shot. Gave it the same firing sound that zombie shotgun guys have to sound stronger, and a green stripe texture. Now has a 12-round capacity, and reloads four shells into the tube instead of two, for faster reloads to compensate for its larger capacity size. The plasma also lights up any surfaces it hits for a short time, illuminating areas that were shot at, allowing the player to use it as a secondary flashlight without lowering their weapon, but at the cost of using ammo to light up the areas.
3. The Machinegun now fires faster and has the firing sound of the vanilla Doom 3 pistol to sound stronger. Also has a new orange corroded texture. Also has more visible projectile rounds.
4. Chaingun fires faster and fires two projectiles with each shot to be closer to a minigun, with lower damage per shot, more knockback, a 100-round mag, and a new digital camo texture.
5. Hand grenades move faster through the air, explode on contact with all surfaces, and have less of an arch when traveling through the air. Explosion effect has been replaced with the Cacodemon's lightning ball explosion.
6. Plasma gun now has a better firing sound, higher fire rate, slightly lower damage, and a 70-round magazine. Also fires white hot plasma instead of blue, has a white scratched texture, and the ambiance sound has been changed to the Soul Cube's.
7. Rocket launcher now fires four rockets per shot, but less damage per rocket, slower firing speed, and a low-accuracy spread for the rockets. Rockets travel slightly faster and have more splash damage. A new leopard camo texture added, too.
8. BFG 9000 has more damage per blast, and a faster projectile, but now has only a 1-round magazine, needing to reload after each shot. New texture that is similar to the classic BFG from the first Dooms, to look closer to the original.
9. Chainsaw has a slightly modified texture with warning stripe lines.

10. The Soul cube now has a white glow effect when it attacks enemies, to look more powerful and mystical, and to help the player see where it is going.

11. The Unmaker is the Super Double Barrel Shotgun, but with a new rusty, bloody, corroded demonic texture. When this weapon is found, it isn't set to a number key, so you must use your mouse wheel to scroll to it or use your "next weapon" or "previous weapon" keys to scroll to it. It uses hand grenade ammo, fires imp fire balls that move as fast as bullets and illuminate areas that are shot at for a short time, has a lightning effect when firing, a demonic sound when firing, has an 8-round capacity, and is fully automatic if you hold down the attack button. This weapon was added to rival the BFG in power, and kills most enemies in one or two shots. It actually spawns in the Mars City Administration and Delta Sector 5 levels where you can find it and pick it up, but you can get this weapon by also using the in-game console and typing "give weapon_unmaker" and then press enter, and the weapon will be in your hands. (Don't spam this weapon. It is too powerful and runs out of ammo quickly. But, hey, I can't control what you do. Learn it the hard way for yourself and see what I mean.)

1. The shotgun texture is buggy and turns black in certain areas and fine in others. This is random. Mostly occurs in areas with a lot of lights.

2. The BFG texture is buggy and turns black when you zoom in while holding it. Simply don't zoom in for too long and this won't happen.

3. The rocket launcher texture is fine until it does a reload animation where it will be black in some areas, but this lasts for a short time and you won't notice it.

4. In the Mars City Admin level, the Unmaker is floating where it spawns, instead of sitting on the table in the security office where you encounter the demon dog.

5. The Unmaker can lower your frames when fired in full-auto, so use it sparingly if your PC can't handle it, or turn down your graphics and effects if you want to spam this thing. (Don't spam this weapon. It is too powerful and runs out of ammo quickly.)

dylux35 - Moddb.com The creator of the zz_double barrel shotgun PK4 files that I used as the base for the Unmaker. Without his mod, the Unmaker wouldn't be in this mod.

Stephen, for his idea to make the shotgun fire incendiary slugs. This original idea was all his. Not mine, and I simply brought it to life.

Devean, for his constant emotional support and encouragement as I worked on this project for two weeks. He kept me going.

Crimson, who is a MASSIVE Doom fan, and the biggest Doom fan on Earth. His knowledge on Doom lore and weapons, and his zest and passion for Doom helped me with the direction of this mod and what the Unmaker should be like in order to be close to its version in Doom 64 and Doom Eternal. He also kept supporting me and cheering me on as I worked on this mod.

Tanner and Thom, who I kept updating about the progress on this mod. You guys have waited for days, well here you now have it! 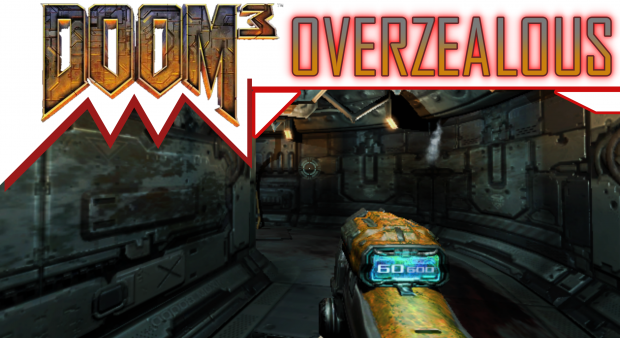