Changelog: US: -.30 cal during the training mission instead of the MG42 -Foley now uses the Captain helmet from the beginning -New Thompson skin -Correct helmet and model for the medic in Brecourt -Springfield reload fixed British: -Welrod pistol added: the player will use it during the dam mission -Unscoped enfield reload fixed -New skin for the Delisle commando carbine -Waters will toss the player the scoped enfield during the truckride mission -new npc textures for the enfield Russian: -The russian officers now have the TT33 instead of the luger. -dp28 during the redsquare mission that replaces the mg42. -slightly different skin for the papashash 41 -new npc skin for the mosin-nagant. German: -New Kar98K model. -New MP40 model. Italian -Breda added during the Sicily mission. The reload animation is ugly as shit. (it replaces the StG44) -Carcano M38 da cavalleria added: It replaces the G43 during the sicily mission. -Beretta M1934 added: it replaces the Luger during the sicily mis 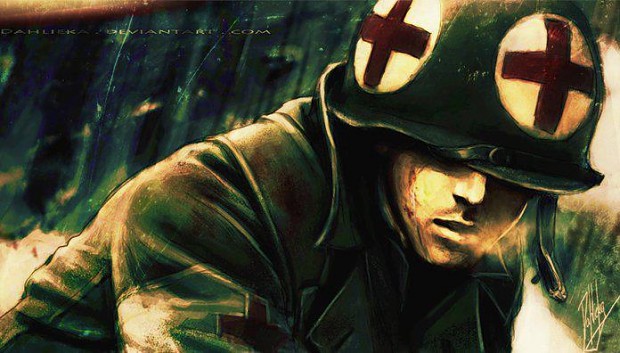 Awesome, this is turning out to be (is) the must have mod for COD1

No prob! ^^ Let me know if you find any bugs

2 sound files are missing or in a bad format error message for United Offensive. The Carcano and Mab sounds are missing from the files.

I noticed that the MG42 view and world model was changed back to the bad looking stock one. Not sure if this was a mistake.

It should be ok now...
let me know if the mg42 and the audio files are still missing

Good Job, but i think old sniper scope much better. I like small version :)

Really?! O.o that was a super low-res scope! I hated it so much...
If you want to restore the old scope, however, search for the "reticle_q.tga" file inside the mod and delete it

Cool! Marcomix , thank you for not forgetting to improve the mod !!!

I could be doing something wrong, but the 30-cal doesn't have sound. I first noticed it on the training mission. Is there a sound file missing or did I do something wrong? Please let me know whenever you can. Thank you!

That's strange...try to load the redsquare mission and tell me if the DP28 is missing sound too.
-Are you using other sound mods?
-Open the mod file (Zrealweapons3.5.pk3)...search for sound\weapons\30cal. Is the folder there and does it contain the audio files?
-Open the soundaliases folder and then, open the iw_sound.csv file.
Search for a string called weap_30cal_loop. is it there?

Do other pepole have this issue? Cause the mod works perfectly for me...

Now I have proof that the .30 cal sound works for other users...
Maybe You installed some sound mod that causes soundalias conflict?

Hey Marcomix what's up? Could you put gloves for the winter gears? For the russians I suggest this too.

I'll think about it, thanks!
I have a question, though...
Did you play this version of MRW? During the training mission, does the 30 cal have sound?

No I didn't played yet. One more thing, I suggest to put the same american winter gear for the player too, with gloves of course. Put gloves for the russian player too.

The world model of Luger is the original and the bashing model of the Thompson M1928A1 is ugly.

Oh, I forgot about the Thompson M1928 stock...I'll fix it in the next release, I promise!
What's wrong with the Luger worldmodel? It's the stock one, indeed...but why is that a problem?

The world model of the luger is unchanged. I mean same, like in the original CoD.

...so what?XD the viewmodel is from original CoD as well...XD

No. It's black. The original is gray.

Oh, you mean the skin, not the model XD
Easy fix, don't worry! I'all fix it when I'll have some spare time ;)

I've found a PPS-43 in the second map, in a house, where you have to run, because of the mortars. An MP40 should be on that place, instead a PPS-40 is placed there.

When you shot all the bullets from the PPS-43, then reload, the animation is not correct or missing.

Thanks, this is probably a wrong radiantmodel name...
about the reload anim, well...It's a matter of names, too...I'll fix it in the next release

Listen, you can do so from a machine gun could shoot on the move.
Media.moddb.com
Tired of constantly this icon.
1.bp.blogspot.com of Duty United Offensive PC Game-1-free download.jpg

some enemy is invisible in uo