Fix Patch 1.0 for Revenge of Revan Demo (Beta) Version 1.0 Changes - Fixed bug where there is sometimes a break in dlg when you are controlling Uldir at the end of the fight with Jedi - Fixed the NPC Republic scientists who say talk to Bao-dur after he has already left the module. - Tweak Boma to be a tad easier to fight - Tweak the Twilik Siths' utc to have more HP - Black Boxes now are datapads and have text that shows up when you discover one. - Descriptions added to Quest Items/datpads- PC's home planet, Exile's gender and Alignment, Crystal for Door (also as a new icon so you can not place in saber) Calming Plant has new icon and can not be worn as an item, - Personal Journal (Corellia) quest items with descriptions. ------------------------------------- INSTALLATION Simply place the files into the Override folder Allow the files to override the old ones if asked 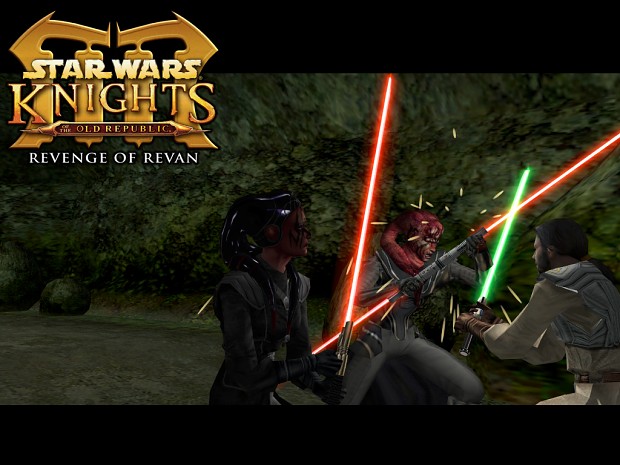 When will the VO patch be released? Not to rush you, I'm just curious to see how good the dialogue is.

The VO patch will be later this fall/ winter since over seeing Actors for these roles and making sure we get good people is new to me so I'm just being cautious. Want the best quality I can get for the Mod.

Awesome! Thanks for the quick reply!

ummm did i miss an update or im that sloppy at looking for stuff but its 2013 and i havent seen any VO patch i hope the mod isnt dead ;(

And in case you didn't notice, I replied that my present ZIP opener -doesn't- open RAR.

I will see what I can do. I don't have ZIP, for some reason I can download but then I can't open and install ZIP

Hi Logan. How do I install Revenge of Revan demo? I'm in New Zealand and I tried installing the ROR Patch and I can't even install the demo for me to try it out? Can you help me out withy it I only have Windows 7?

Get 7Zip it's free and deals with all the main file compression formats.

Wait a nanosecond will there be voice in this mod?

Yes there will be Voice in the Mod.

Getting a system for this has taken time plus I want to make sure I will not be asking actors to re do lines from one build to another.

Guys you can open the rar file total commander

It won't download on my Computer is says "Error 401- Gone"
Logan can you help me, your my only hope- B-)

Is this mod dead?? I downloaded it last year, and no further developments have been made/publicised??

Hey ! What's up with RoR ? Any informations, when final version will be relased ?

Is this mod dead or what? Would be a shame if it is

This mod, unfortunately, appears dead. It has been two years since the last meaningful update or author comment :(

This may not be entirely true, I just found some other section of this mod dated recently-ish, my bad if this statement is false

i installed the mod as described in the installation guide but when i try to start the game this error pops up:

no images specified for button.
please restore installation or reinstall the game.

pls help (if this mod is still alive)!

Is the mod dead? today i downloaded the beta demo and its amazing....i was hopping for a full version soon ....i guess not... this mod had great potential

thank you for any answer anyone can give

I followed all the instructions but mine doesn't even start

the mods still living i cheeked his profile