(Old File) In this release, Chronicles Immersive Chargen v2.4 (Alpha Release) of this expanding city mod that seeks to give the player a new experience. It expands the town of Seyda Neen along the roadside. The city itself is very large. There is are new guards and prisoners to the Imperial Prison Ship, Docks and Travel Cargo Ships, a New INN and Shops, tons of NPC's to the growing town. What this plugin does provide is a huge growing town for the player's use, more inns, shops, and etc... 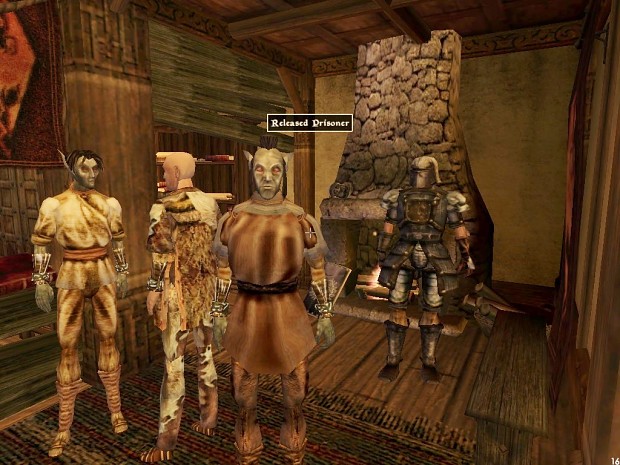 2.20 - Added wooden sticks to the bridge crossing seyda neen. Added swamp textures to the river and boulders blocking the sea on both ends! It now adds a lot to the atmosphere in swampy Seyda Neen! Changed the value of gold coins from 25 drakes to 250 gold coins in the lock box hidden on top of Arrile's Trade House.

2.10 - Added New Seyda Neen by Transmaster! This is his old file from several years ago, used with permission. (This is just the wooden shacks and village not to be confused with his current project Morrowind Rebirth. Which was not used in this build!)

2.00 - Added three characters at the entrance to the census office, they will speak upon exiting the building. Change Fargoth to a Thief! Added Netch Armor and Shield to his character. Added a green robe to Eldafire... she is now a Mage!

1.90 - Added an extra guard to the Imperial Office.

1.80 - Added Iron pauldrons to the dark elf guard that jumps you upon exiting the building. Added a common shirt to the dark elf prisoners who is with him. Added clothing to the dead man in the courtyard. Added the enchanted ring back to the barrel outside, like the original morrowind. Lowered the stone wall in the courtyard, so you can visibly see the town of Seyda Neen. Kick the chair down and enter the Imperial Office.

1.70 - Added a Thief by the exit door, who will either flee or fight as you approach. There is now beginning loot for all three character classes Thief, Mage, and Warrior. If you kill the wood elf thief, you can steal his netch armor as a thief character. On the table is a scroll, potions, and a blue robe for the character starting out as a Mage. In the wooden crate there is a full
suit of Iron Armor and sword and shield... for the Warrior.

1.60 - Added an Iron Broadsword by the broken door, as the prisoner riot is active. This will give you the player character a chance to participate in the fight.

1.50 - Added a extra monk by the Imperial Guard with another alternate brown robe, as you wait to unlock the door. He will now fight with the others when the prisoner riot starts.

1.40 - Changed the races to the prisoners eating food in the common room. Added common shirts to those missing clothing. Added long Iron Shield to guard. Changed the robe to the census monk waiting for your papers. Increased the amount you are reward from 85 drakes to 850 imperial coins.

1.30 - Added clothing to prisoners standing in line, although they are waiting for clothes, they can now be waiting for papers. As there would be too much nudity with better bodies, for those you playing that mod! Changed the robe to the monk behind the desk. Added iron pauldrons to the Imperial Guard who ask if you have any questions. Added female dark elf with bookcase of potions, although she does not speak, she has spells for sale.

1.20 - Added clothing to prisoners standing in line, inside the Census and Excise Office, changing their disposition ratings to 10,20,30 and 50 respectively! Added Iron Helm and Iron Pauldrons to guard by the fireplace. Moved the blond male Monk a little to the left, while reading books from the bookcase. Changed the robes to all monks... keeping the brown, but various styles. Added chain, netch, iron pauldrons to all guards.

1.10 - Removed the Invisible walls on the Imperial Prison Ship... now you will be able to move freely around the ship, but will no be able to jump off. Changed the disposition of Imperial Guards to 10, 20, 30 ... and Hello to 90! Added chain, netch, iron, and imperial pauldrons to guards.