Around 0.5 ABY, the Mandalorian bounty hunter Boba Fett captured a group of Rebel Alliance members that included Admiral Gial Ackbar. Fett delivered Ackbar to the Galactic Empire and sold his remaining crew into slavery to the Hutt Cartel in the city of Mos Eisley on the planet Tatooine. The Alliance responded by assigning its new elite fighting force, Renegade Squadron, created by smugglers-turned-Rebels General Han Solo and Commander Col Serra, on a mission to rescue the prisoners. The local Imperial garrison on Tatooine attempted to stop the Rebels from freeing their comrades, but Renegade Squadron rescued the prisoners. The Rebels initially believed the mission to be a success and a miraculous rescue effort on the part of Renegade Squadron. However, Fett had placed a tracking device in an R5-series astromech droid that had accompanied Renegade Squadron on the mission, leading the Imperials to the Rebels' new base on Boz Pity. Years later, following the Empire's defeat and the form

KNOWN ISSUES:
*This uses Mos Eisley buildings, so the same ... err ... issues that it had will be present in this
*Shadows aren't perfect. No plans to fix them 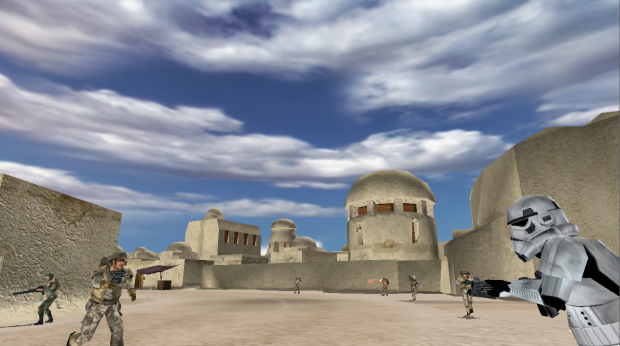 So, this is kind of my take on both Tatooine maps in this pack, the Elite Squadron and the Renegade Squadron ones, they are quite different, especially compared to the one we got in Battlefront II, the Renegade version is my preferred one, the layout is more interesting, as opposed to the Elite version, where it's more of a head on confrontation.

For me both maps kind of suffer from just being Mos Eisley again, and maybe this is a personal thing, but I feel like I've seen these assets enough, they don't really do anything to stand out among all of the Mos Eisley-style maps (but that was never the developers intention, I suppose). Nevertheless, even if it's not a map I want to play again, I think this one is a refreshing take on the setting, maybe others will get more out of it.