This is a pack of 20 weapons for UT2004. The latest version of Ballistic Weapons v2.5 Complete Pack is required for this pack to work. A download link can be found on Runestorm's official page. The latest patch for UT2004, v3369, is also required.

The latest version of Ballistic Weapons v2.5 Complete Pack is required for this pack to work. A download link can be found on Runestorm's official page, Runestorm.com.

This weapon pack contains a total of 20 weapons. While more Skrith weapons were planned so as to make the pack suit its name, managing it became a chore,
and as such further Skrith weapons will hopefully be released in another pack some time in the future.

Extract the .zip contents into your Unreal directory. Cut and paste the files into
their proper Unreal folders.

Delete BWCache.ini for your UT2004\System folder. The game will automatically create a new one.

Go to your Ballistic Loadout or Ballistic Weapons mutator in the mutators menu and add the new weapons to the weapon list.

If you want to host a game with these weapons online, add the following to serverpackages in your UT2004.ini:

To uninstall the Skrith Invasion Weapon Pack, delete the following files from your UT2004 folder:

Known Issues:
-------------------------
-Some effects, such as the Radar gun's sound pitch change, do not work properly on listen servers
-Players who are forced to use the Speed combo by the AD420 Stimpack can still use the Ballistic sprint feature (this is partially intentional)
-Projectiles from the A700, WBort, Magni, and A74 don't go where they should when the user is zoomed in online
-The HPSCMK3 secondary energy bolt doesn't always go where the player is looking online
-The self-supplying functions of the A-Pod Capsule, NTOV Bandage, and L8GI Ammo Pack don't always work online
-The A700's special doesn't work online
-Putting the mdk down after switching its firing mode online will reset the firing effects to that of the default firing mode
-A lot of weapons still have log messages for testing purposes
-The SAR-D's camera can not aim its shots online
-The SAR-D's camera can still fire after being damaged online

You are not allowed to commercially exploit this weapon pack.
You may distribute this weapon pack through any electronic medium, as long as you do
not charge any type of fee. You must also attach this text file with the weapon pack.

Unreal (c) and the Unreal logo are the registered trademarks of Epic Games,
Inc. Distributed under license by GT Software, Inc. All other (c) logos and
trademarks are the properties of their respective owners.


Report any problems with the .zip and its contents. 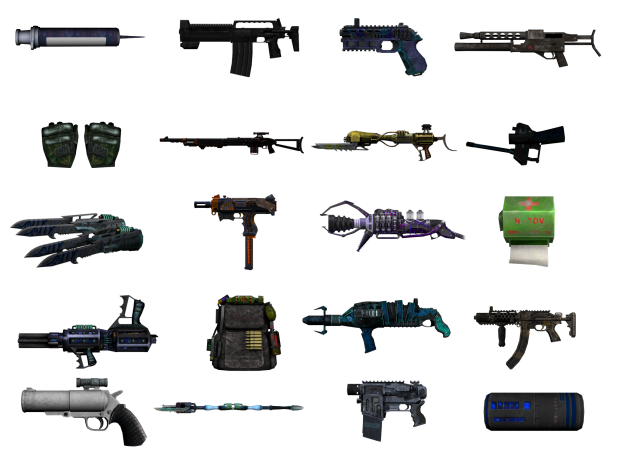 Please let us know if you find any bugs or issues that aren't already in the Known Issues section of the readme.

Unfortunately it's at a standstill right now.

Okay~ Good night evryone, I've tested all of this (and I must say) awesome weapon pack, and I would like to share my thoughts, impressions and opinions of them. :)
In the same order as the description:

1. RDR178 Handheld Radar "Gun" -- This is a pretty valuable (and very useful) option to use in gametypes like Ballistic Conflict, or if you don't want to use the BR1-NK itself. I like it the way it is. May I suggest, as it already have an "energy" bar... Why not add it some utility to it? Like energy charge while not activated, or discharge while activated?

2. A800 Skrith Minigun -- Badass weapon. I made quite a mess with it. (Is the alt-fire more powerful, since it shoots bolts instead of insta-lasers?)

3. Fifty-6 Machine Pistol -- Dual-wielding this is cool. Way much cooler when u alt-fire them right at the face of someone~

4. XMK5C Civilian Submachinegun -- Decent ammo, firerate, and also accuracy (even while shooting). An excelent choice for a secondary weapon.

5. A-Pod Electro Adrenaline Discharge Capsule -- A portable adrenaline capsule. Well, it's a little weird? I don't see it very usefulness btw. I do prefer to choose some grenades or something like that. (Maybe if it gives a little ammount of adrenaline per second?)

6. SAR-D Assault Rifle -- It's so much fun (and crazy) the ammount of kills you can get with a well-placed camera. Overall is much like the original S-AR 12.

7. B14R7 Personal Defense Pistol -- Like the common MD24, but with better CC with its alt. ammo and the tazer. Although the special ammo doesn't deal dmg at all, its very useful to punish focused objectives, better in team-based games.

8. C41 Assault Rifle (Model by Teridax, camo system by Azarael) -- Whoever made this weapon, have all my thanks for bringing the iconic Starcraft Terran rifle to this game. I enjoy it so much~ (tho I couldn't get to work the "special 2: laser sight" that is mentioned in the weapon info). The worst thing I see in this weapon is the grenade launcher, I don't like it very much. May I suggest, putting the laser sight in the alt-fire and removing the grenade launcher?

9. Knuckles -- Nothing better than killing someone with your bare hands.

11. N-TOV Emergency Bandage -- Same as the Adr. capsule, but this one is a little more useful in a pinch.

13. AD-420 Combat Enhancing Stimulation Delivery Package -- So... this stimpack auto-activate a combo to self, or to others, with the ammount of adrenaline the targeted character have, basically?

14. A999 Electrified Skrith Wrist Blades -- Like the common blades, but with moar rechargeable shocking power~ I like it :3

15. A62 Skrith Energy Staff -- At last, something that can absorb damage like the Shield Gun. I suggest to add a claw-mark effect on hitting a surface (such as a wall), since I don't see any (noticed when I was trying to test its maximum range attack distance).

16. WBORT-99 -- It's quite hard to hit something with this one, regardless, it's a fun weapon if you can place a well-shot~

17. MDK0331 Heavy Assault Pistol -- Now this is a perfect supportive side-arm. Its adaptability is excellent. I love the attachments of the sniper magazine, it would be nice that the shotgun or the magnum ones had some (maybe a larger barrel or something like that?). Something I really hate about the MDK is that you *must* **** it right after reloading, even if there's still ammo in the magazine, so unlike other sidearms, this adds some precious seconds to the reloading time.

18. A700 Skrith Rocket Launcher -- I really had troubles to hit someone with this in the first tries, then I managed to aim it properly sometimes (the guided rockets are a little easier to aim). It's not bad at all, but I still prefer to use other Rocket Launchers, like the G5.

19. A74 Skrith Heavy Rifle -- My first impressions weren't good due to it's slower firerate than its cousins, but what it lacks in firerate, it compensate with its faster bolt speed. The tracking system is good too.

20. L8 GI Ammunition Pack -- Probably my best choice among the portable bandage or the adrenaline capsule, since I waste so much ammo... :P

A little edit for a couple of weapons~

*2. A800 Skrith Minigun -- Bad thing I found about this minigun is that you can't modify its firerate (like the XMB does, for example, that could be 600, 900 or 1200 rpm). This makes the A800 quite hard to aim while sustained fire. [From all miniguns... I love the XMB, tho its base firerate is rather slow than the XMV, this makes it much more accurate (its bullets pack a punch too).]

*12. HPSC Lightning Gun Mk3 -- I suggest to make the U-Damage buff that this weapon gives accumulative time (like 0.5 seconds per ammo used), instead of fixed time. Guess that would make better use of sustained fire upon targeted objective (self/other).

*20. L8 GI Ammunition Pack -- Instead of having just a single use of this, I suggest to give the L8 GI something like a recast-time (like the C41 rifle's special have). Guess that could make it much more viable than just dissapearing from your inventory after use. ^^

Thanks for reading, and excuse me if I'm a little annoying~ (éwe)

You're not being annoying at all. You're the first person to give me any in-depth feedback for this pack, so I really appreciate your posts.

I unzipped the content in my UT2004 folders, but I'm unable to see the new weapons in the Loadout menu. I can actually see them in the Weapon Database (Settings menu). Did I do something wrong?

Did you delete your BWCache.ini file first? If not, do that and then see if it works.

It should work with Junk Wars, I use that too. Do you have the Skrith War weapon pack? It's not supposed to be required, but maybe I screwed up with the dependencies.

Yes, I have it.
It is worth to mention that the BWCache.ini generated does not include the names of the new weapons, maybe it has something to do with the issue.

Huh, now I'm totally at a loss. I've never seen that happen before. Have you checked the "Use all weapons" box in the loadout menu to see if the weapons show up outside of the categories that Ballistic weapons normally use?

Well, I purged completely the UT2004 folder and reinstalled, with 3369 patch, the megapack and BW 2.5. Checked the "use all weapons". Still unable to use the pack. Probably I'm missing something. Did I require some other packs or something similar? What packs do you have?

Nevermind, I found the problem. Probably some uncompatibility with another BW mod, sadly I'm not sure which one.

i have the same problem and i dont know what mod it is :/

i found a fix
if you have ballistic pro then delete it and install skrith war pack and the delete bw cache :)

awesome more weapons for my armory! but its a shame some of them are just reskin,but anyways keep doing these weapon packs to add in BW the more weapons the better,also if you can make more new weapons from the scratch Without having to reskin those that already exist inside the pack.

also these counter strike weapons BW have in general doesnt fit UT you should at least make a pack only with sci-fi weapons.

the ideia to put hud on some weapons in BW are great,make more weapons with hud.

in general this pack is badass,keep the nice work.

Not bad the re-skins, LOVED them!