I've never been a particular fan of having a game end extremely quickly because of an ambush or an unlucky missstep. Sure the game should be harsh and unforgiving towards mistakes, but I personally prefer the punishment to manifest in the added expenses of resources and medkits, rather than just having to hit F9 for the 10th time.

Doubling the effective health essentially makes the player more immediately survivable, but puts more emphasis on stocking and using enough medkits for a journey. If you run out of those, you will still be screwed, putting an upper limit on the amount of mistakes you can allow yourself, similar to how it works in Dark Souls or Resident Evil.

Also who thought it was a good idea for medkits to not cure bleeding lol. 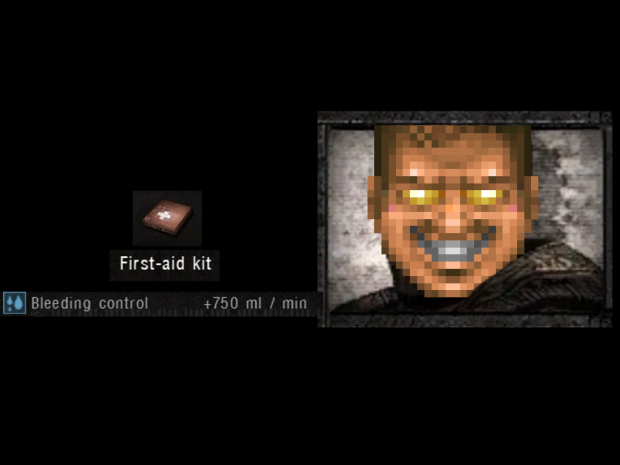 Now significantly increase the time most healing items take to heal, with only a few rare expensive ones that heal at "combat speed" and you have much better and interesting health system

Hmm. I don't know how I feel about this one. I'm far from being the Stalkers game's police, and for me, the more addons, the more choice to the players, more interesting and attractive game ends up.

Also, you touch on a very sensible point in your description. I play Stalker for a very long time now. Because of this, nowadays I virtually exclusively play on Ironman with Agony mode enabled, aiming for an Invictus achievement. So no F9 for me. The times that I've almost left my Stalker playing days behind, with a head full of rage, was when I had a game with dozens, dozens and dozens of hours invested abruptly ended because of a one-shot kill from an anomaly.
I still play the game, but to this day I still find anomalies pretty stupid, how they can instakill you except if you're wearing an SSP-Class suit, which leaves the player vulnerable to firearms, (even if you're wearing the Ruby SSP), and wearing the artifacts inside container units, some very endgame, expensive and hard-to-find gear. Even if you're wearing a Nosorog. It's understandable that Exos and Nosorogs are aimed against firearms, but they're last armors in the game one can find, they should be for a little more than that.
If anomalies are to be so gamechanger, they shouldn't be allowed outside artifacts areas, and certainly shouldn't be invisible. But they are, so or I stop playing the game, or I adapt.

Since I'm no modder, I kept playing but I'm still patiently waiting for someone to tone down anomalies damage. This bothers me so much, I almost started a course in TI, just to learn how to code, and change this ********.

That being said, there's something about Stalker's realism that attracts me. You see, one can enroll himself in the US Navy, become a Seal, the most elite of all elite, have the most advanced training and the most developed gear at your disposal. If you go on a mission, and an enemy shots you right, which isn't hard to do most of the time, and with, say, an AK47, a very old rifle as of today modern world, there's no kevlar stopping the bullet, unless you're wearing triple your body weight in armor. And the person is still going to get hurt. Even today, the year 2021, this is how things still are. No wonder countries that can afford prefer to deploy drones or very armored vehicles instead of people. There's very against stopping a bullet from an assault rifle aimed at a person. It's not that there isn't technology. It's just the way physics works, an educated guess.

Stalker games reflect that very well. Not only that but they were able to build a very appropriate lore, one that it isn't, mind you, that much fictional, since all guns and armor, and the Chernobyl phenomenon actually are real/occurred, but they were able to build a lore where vehicles can't be deployed in the zone, because of the anomalies. So everything is very well sewn.

When addons come and facilitate the, say, realistic part of the game, the combat, without offering something in return to make the game balanced, I always fells addons like this are a little out of place in a Stalker game.

Still, your addon is most welcome! Let the players play the game as they want!

Anomaly's arbitrary and misapplied idea of "realism" isn't exactly terribly fun to me, and this notion that I have to "give something back" to make the game balanced is silly. Had I considered the game balanced to begin with, I hardly would have needed to start modding it myself.
Realism to me isn't the most important thing for a game to be enjoyable. It can be a good frame of reference, especially for STALKER, but if it gets too much in the way of being playable, then I will gladly scale it back as far as I need to. If that's an issue to you, just don't use the mod I guess, theres no need to leave a comment telling me how I should make my mods. I have no respect for comments that are just here to tell me that something is "unrealistic", which I usually am completely aware of and isn't at all something I care about.

Not like I need to justify my balance decision to you, but I will share some insight into why I this is in my mind a good or even necessary one.
Anomaly as far as I can tell got rid of passive healing generation, which means that every wound needs to be healed with resources that need to be bought or looted. This is in principle a good thing, it puts a material cost to every mistake you make. The problem starts to arise when especially early on most things kill you extremely quickly, forcing you into loading a save game, which aside from being unsatisfying and unexciting, also means the player now doesn't need to use their medical items anymore. The consequence for making a mistake now doesn't manifest in the actual game as additional cost that will have to be paid at some time, but just a reset of the state.
There are other downsides to a gameplaystyle that has the player F9 too often. The excitement of surviving an encounter is greatly diminished if you have to load the game and basically are now aware of where an ambush is and where the enemies are that you have to fight (obviously not an issue in ironman, but I will never play ironman lol). It's much preferable to get ambushed, suffer some health loss during an encounter but to be overall likely to make it out barely alive if you react quickly and play decently enough.

A game being difficult doesn't need to mean that every mistake has to be punished with immediate death. Leaving the player with some breathing room to be able to recover and actually learn from mistakes is important for a game to actually flow well. I mentioned Dark Souls and Resident Evil as references for what role I wanted healing to have, and there is a very good reason for that. In those games it's very rare for any one single attack to instantly kill you. There usually always is some chance to retreat to relative safety or to use healing items, as long as the player has some, but they don't have endless supplies of them and still need to try and not get hurt in the first place, you can basically think of the amount of healing items you have on you as an extension of your actual health. I also want to mention that those are two games in which it's possible to play well enough to almost never need any healing whatsoever, because anything that can harm you is usually well telegraphed. This is obviously not the case in STALKER, which is arguably why it is MORE in need of a forgiving health system, not a more punishing one.

As a finishing note I also just want to mention that doubling the player's health sounds like way bigger of a deal than it really is, because as it turns out twice of not very much is still not terribly much.

Fair enough. I myself am guilty of using addons "against" immersion, in favor of a more quality-of-life experience in playing, like having a HUD, which more hardcore players kinda shun upon. As I always said to myself, the more choices a player can have, the more the game ends up attractive, for both the broader public and the diehard realism fans. Let people decide how they want to play. Your .dltx addon is extraordinarily welcome and helpful in this sense.

Is it possible fo you to include an alternate file without the bleeding change? Some people would prefer not to have that. I'm going to download the mod and remove it myself for now, but others might not want to do that.

Less quick load and less rubles in my wallet. Thank you very much!