A massive fortress map for Edain. I base it off of a city from my own fantasy universe (I plan on making it a major city in a video game later on). So as for Lotr lore friendly, I think I will let the people who come to comment and download this, make up their own lore for it, the basis is that it's a large port city which is inhabited by both men and elves. I hope you enjoy the map, cause I spent a while on it (sadly I still can't get the minimap to be the right shade of brown, and that's a bit annoying, but whatever).

A large fortress map, 2 versions are included, one is 1v4, the other is 2v4, I may make a 1v5, and 2v5 version later on. Also it has a unique ring pick up scenario (I'll let you figure that out yourself), I will add the default ring pick up scenario (gollum spawns), later on, I don't know when edain will update and change something with gollum so it will wait for now, however I may add it later along with the 1v5, 2v5 versions.

UPDATED: I have added the 1v5, and 2v5 versions (which do not have the unique ring drop scenario, just the standard gollum scenario). All versions have the standard gollum ring drop scenario included, however if you want the gollum scenario you have to go into worldbuilder and set The_Haunted script folder to inactive, the folder is located in PlyCreeps--> RingDropScenarios, just disable the folder The_Haunted and then the gollum standard scenario will happen instead. I also did a few fixes with the map, and set the camera further out so you can see more of the map (so from standard 300 to 600, if you don't like it then go set it yourself in mapsettings). Let me know if there is any problems with the map. 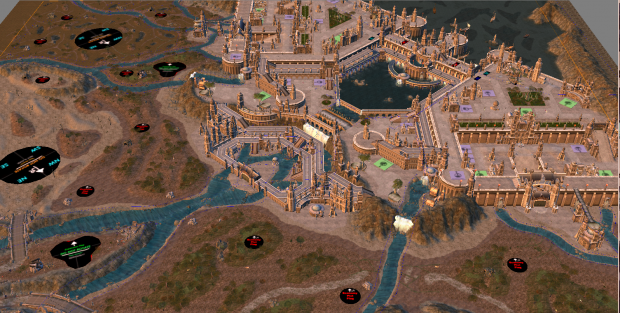 what did you use to make the minimap? if you used photoshop then you use this brown #4c2c01

I used Gimp but I did follow the tutorials I read but they were all for photoshop, and no matter what I did it ended up as either a brown square, or a grey-scale minimap. I am annoyed a little bit about not being able to make it the right shade but I'm not too worried about it, since none of the player colors blend in with it. I'm more worried if there is any big problems with the map itself, I did test it constantly and didn't have any problems with it, so it should work but this is the first map I've uploaded to moddb.

I have updated the map, so if you have the old version than you should download the updated one (you will know because the new one is Nivarium Maps V2), it has 2 extra map versions 1v5, and 2v5, as well as some fixes and added standard ring drop gollum scenario. Check description under updated for full info, and let me know what you think of the map.

I love this map, but I continue to get out of memory errors. Any ideas?

I've not had that issue when playing the game (plenty of other errors but that one I cannot remember having), I doubt it's a problem with the map. Also sorry it took me so long to check my own map's page (I got caught up watching anime, and work).

before that error came, did your computer start to lag a lot first?
I used to get that on my old computer, something relate to my ram orz.