BETA: This map is still in development! Please supply feedback in the comments! :) Remedy takes place in an underground Horzine facility, producing a product known as 'The Remedy'. Publicly know as a cancer treatment drug, it actually turns the patients more... Vile. Your mission is to stop the production of the so-called cure. 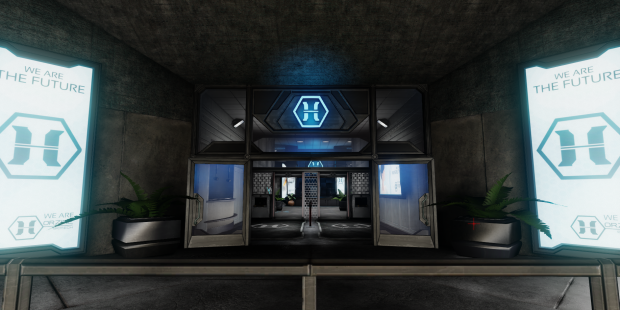 Not sure about this one. It has some really nice visuals, and a Horzine lab feel, and it seems to be the right size. Pretty good for a custom map. There is one part in the beginning though, some door leads out to a hole where you just fall down forever, which needs to be fixed. I had to restart the map. On the other hand, I have to admit I got bored quick. A little too generic for me. Don't get me wrong, it's a good map design and the maker did well. It just needs something new, or creative, some x factor to make it interesting enough to want to play.

Thanks for your feedback! I have no idea how I missed that door, it's fixed now. It's my first map so I'm still getting the hang of map layouts. Can you mention anything specific that made the map boring?
As you probably noticed many areas feels empty, which I'm also working on. :)
EDIT: I'm uploading V3 tonight.

Thanks for the response. I tried v3 just the other day with a few mates. This is basically what was noticed by us:

* In certain areas, performance takes a hit, lost lots of frames. Wasn't smooth at all, so tried to avoid those places due to that.

* Sounds of the guns don't seem to travel far. Normally you can hear the other players fighting but on this map it's noticeable, we were fighting pretty close to each other but couldn't hear anything.

* There is bad lighting in some areas. A stairwell was particularly bad. I guess it was by design? (broken power panel) But it was just too dark. Also in some places there are light bulbs but no actual light being emitted from them. One spot where a green pickup item was I couldn't get there until someone found a way of jumping there, it was really hard to spot due to the lighting.

* Apart from one room that I saw, all other rooms are not labelled, i.e. they have no names. Makes it really hard to communicate with buddies as to where you are when lost. Also just for the general understanding of the building where you are. Most rooms I have no idea what they are for, what purpose. Is is described as making a cure but it looks more like an ammo factory.

* Zed's seem to spawn way too fast, like all at once. Not well paced, the rounds go quicker but it feels rushed, just think the pacing is not right.

* There is some AI path finding issues, the Zeds sometimes get confused, run back and forth on the same line, not towards us, and they don't attack us. In particular one fleshpound was raging and he didn't managed to come to any of us, just run up and down some stairs over and over again.

Here are the good things:

* Thanks for blocking off that early door :)

* Big map, lots to explore, good when you have a full server of 6 people, not cramped.

* There seem to be no dead ends, you can always going moving regardless of where you are, which is great, because getting trapped is a major cause of deaths. Lots of points there.

* The water effect, the flooded rooms, is cool

* Scientist suits, have not seen many of these but they are great, making it feel like a lab

For what it's worth, the map has potential to be a good map, and a regular on our server rotation, but it needs some work before we can release into the wild :)

I think with room names, more visual themed stuff (maybe scientists/workers), fixing annoyances like lighting, spawn timing, and path finding, it will be great! Thanks for your time, and best of luck. :)

Thank you so much for this extensive feedback! My apologies for the late reply, I had to focus on work for the past few weeks. I know what to do for most of your issues, but could you please elaborate:

*In which specific areas did you experience fps drop?
*Which pickup are you referring to? (The one you had to jump to)
*Which stairs confused the Zeds? (I tried to fix this in V3, apparently I didn't do it right)

On Friday-Sunday I will be looking into a fix for the issues you posted. if you're gonna play then, it would be awesome if I could test it with you. My steam name is same as here (AlexMilo).

Sure, I've sent a friend request :) Happy to help. I think the questions can best be answered if we run through the game together.

A door where people shouldn't maybe pass by, send them in infinite fall under map.

I tried v4 but it didn't work, it says 'connection to the server lost'.