This players model has been archived by the uploader because it is out of date and no longer supported. We recommend you browse the file list for the latest players model.

This adds compatibility with the Unification mod version 5.9.1.

This has not extensively tested so there might be some graphical bugs and problems here and there. 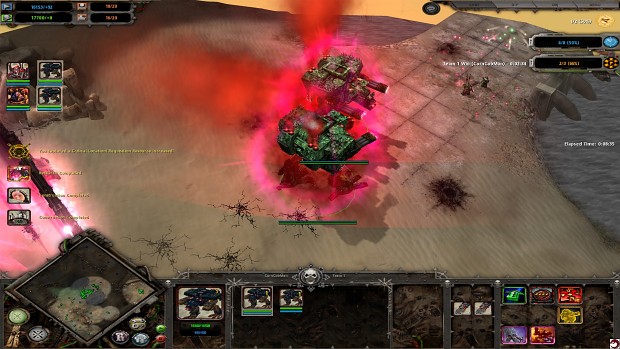 Check the other addons

AI turns off when the Sister of Battle spawns the Canoness in campaign, help please

This should be fixed now.

Found another problem in the attack on the main base of the sisters :D, when the confessor spawns, a critical error occurs

This should be fixed now with the latest patch for my mod.

I cant play skirmish with Space Marines at all. Anytime I try no matter what the setting I activate or who against I get the Fatal Data Error message and the game won't work please fix. This is an awesome mod thx so much for all the time an effort you've put into it.

In campaign, when attacking the Space Marine base, one of the beacons is missing (to the left of the map near the critical point) because of this it is impossible to win. Help please

This might be a Unification thing since I have never had this problem in my mod before. I will have to check.

Thanks, it's fixed, but now Space marine Ai doesn't do anything in campaign :D

I've played through the SM stronghold mission from start to finish and tried starting a new campaign. Both seem to be working fine for me.

Why are the new squads not showing up for Eldar and other races even with the win condition enabled. Also we cant have both unification titans and your relic vehicles for eldar?

I've checked the download and there should be nothing that would cause the issue that you're having.

Also make sure your CornCobMod is up to date as well.

I've noticed a lot of problems while playing.

2. Unification mode and basic vanilla neckron heroes don't appear. As a result, the Khtan unit will also become unavailable (not even on the ARMY paint).

3. Unable to recruit Honor Guard for Space Marine (also not on ARMY Painter)

4.There are multiple addons with duplicate usage effects. It makes it difficult to make any choice.

5. The options that give the heroes, units' HP, Dmg, regen +,- do not apply to units and heroes in Unification Mode.

6. This may be my personal matter.
The unit text of Thousand Sons and tynarid is...
It's not written correctly. Ex)$1600000 no range
(Unification, Fun mode is no problem when running alone)

There's an announcement in the text that you didn't do the proper testing.
There are more problems than I thought.

Only Space marine & Necron Race was tested, and there were a lot of problems like this.
I haven't played any other species yet.
It is expected that there will be several problems for each species.

I'd appreciate it if you could check the problem when you have time.

However, the biggest advantage of this submode is that some of the vanilla races in the existing Uniplication mode
There was little change, so there was a lack of
It was nice to be able to fill in the blanks through the submode of the fun mode.

I deliver the contents through a translator.
I may not be good at writing.
Thank you.

Hopefully the next update of the mod will sort out most of these issues, particularly the tooltip out of range errors.

I derped and asked the wrong question, what i wanted to say is that it seems this addon dont add some of the units to the tau like the gue'vesa which is the reason that i downloaded the mod

Will there be an Unification patch for the latest version of 2.0.6 in the very near future? What are the noticable differences with or wihout the U-patch installed anyway? Cheers.