What is that?
---------------
This is many <<< OWNAGE >>> mutators which change the game to have the best of all the Unreal series in one game.
The main mutator called "-= BEST OF U Items and Weapons=-" changes the sounds of the Ut2004 weapons for UT99 ones
and also changes the sounds of the pickups by the Unreal 1, Ut99, UT3 or Ut2003 ones but mainly UT3 sounds.
The package contains/replaces/adds many weapons:
Replaces the ShieldGun by the UT99 Impact Hammer (optional).
Replaces the Translocator by a unlimited translocator (optional)
Replaces the Sniper by a custom nice sniper made with the painter and UTClassic sniper parts. (Optional too)
Replaces the Rocket Launcher by a 6 grenades/rockets with nice good old sounds (optional).
Transform the Assault Rifle to fire like a powerful handgun. (UT3 Enforcer damage and speed)
Replaces all other main weapons mainly for the sounds but also for the Ut2003 weapons models (the LinkGun and the Shock Rifle).

Another main important mutator is the "-= BEST Of U Classic add-on =-" which Adds the UT99 flag sounds in CTF (return sound, drop sound, etc.)
and fix the telefrag problem online in UT2004 and also adds the UTClassic options in the game without adding the UTClassic weapons.

The package also contains a voicpack to have only the flag sounds in CTF like in UT99 (Flag sounds and Classic UT99 Announcer) Look at the voicepack options in the game menu.

The mutators can be used with the TLMutator to Add the UT99 translocator and enable Telepunt like the original UT99. Audiotooth.com

Time to create CTF classic servers guys and classic DM,DOM too of course!!!!
UT99 Instagib is back in UT2004. Time to switch to UT2004 LOL.

Remove any beta or old versions for the new one
Add the packages of any mutators you want to mix with the BEST OF U Instagib at their respective locations.
Don't forget to add the "-= BEST OF U CLASSIC add-on =-" mutator to have the full options,fix and UT stuff in game.

Note: You don't need to add any off the separate weapon mutators if you use the "-= BEST OF U Items and Weapons =-" mutator. They are include and in the options.

Add this line for your server, caution it's case sensitive...(if you have Linux server take it seriously)

in the UT2004.ini (look at the other similar ServerPackages lines)

You can also use the super weapons of many mutators in Instagib. Some are already added in the SuperShockRifleList.ucl
just take a look by editing the file in notepad and search the weapon packages names on the Internet if you really want to try any of the other Super shock rifles coming from other mutators. (They show up in the selection menu even if you don't have it so don't be surprise if you have 12 Super shock rifles and only 4 or more are working)
You can use the UT3 super shock rifle for example or the Crotch Shot, Unreal Championship SUper Shock Rifle. etc.

Enchanced version 1.01
--------------------------
Fixed weapons models positions in Weapon Lockers including an online fix to see the new weapons.
Added a Classic Instagib mutator with many options for dead bodies effects and pushing.
Added 3 Super shock rifles : UT99 sounds and hit effects with ut2004 plasma beam effect in orange(Gold) or dark purple.
Added Smoke and Vapor sounds when you kill an opponent in Instagib.
Added Headshot with super Shock Rifles. (of course this adds nothing in the damage)
Better weapons BOBS for the Sniper.
Separate mutator for the sniper, Impact Hammer, core (Classic) options and Weapons/Items.
The Main mutators are no more in the Arena group and can be used with many other mutators.(at your own risk)
Added a separate SUper ASMD package to use with the Instagib mutator to add the ASMD in Insagib. Unreal 1 game mod required for this.
Included an additional SuperShockRifleList.ucl to add any SUperShockRifles in the weapon list of the Instagib mutator. You can add your own in the list by editing the ucl.

Final Version 1.00
----------------------------------
Added CTF flag sounds when dropped, returned, etc.
Added a announcer pack to have only the flag sounds in CTF (no announcer) if required (client side)
Fixed weapon replacement problem with other mutators.
THe crazy sniper look and color has been modified. (some 3d, 2d editing)
Fixed Impact Hammer AltFire distance before hitting the floor, wall.
Some FPS view adjustment for the Hammer to be exactly like in UT99.
Added UTClassic Options: No Double jump, No Wall dodge jump, etc... (that can be useful for the purists )
Now the pickups in the wildcard bases are also replaced

Version Beta RC (Release candidate)
-------------------
Fixed the classic Rocket Launcher Grenade spin rotation not playing online.
I do the same for the Assault grenades and why not some more spin.
Major crazy Sniper mesh modifs and animation (UT3 sniper animation on a modified OnsPainter (new crazy sniper), worth the try? Yes Mom)
Fixed all the dam bone names in the crazy Unrealed 3 editor
Fixed and added some 1st et 3rd view stuff for the new weapons.

Credits
--------------
Original Sounds, Animations, meshes from different versions of Unreal Tournament Credit to EPic Game and Digital Extremes.
A lot of modifications on the original meshes, entire skeletal animation remake for the impact hammer by myself and many other stuff I forget.
All the integration and coding by me inspired by some code from UT3, UT99 and UT2004 of course including some of my old mutators.
Man I copy/paste my own code made 7 years ago, What a shame!!!!

Why this mutator?
------------------
The main reason I made this mutator is to try to get more people online playing UT2004 classic CTF. I think the main problem with UT2004 was the sounds and not be able to play with the custom content of UT99.
This is a great game.... I mean.. when you add this mutator.
It is a mutator for UT99 lovers and classic CTF players not really happy with the default UT2004 and UT3 setup. 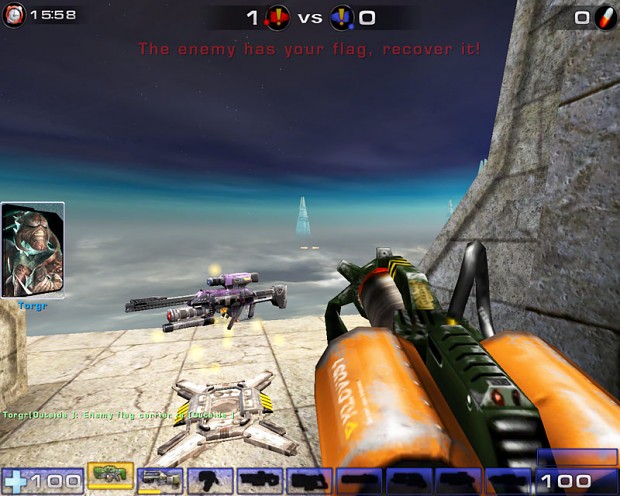 Nice to get nostalgic again.

Best of indeed. Although, could you do something about the grenade launcher alt for the assault rifle? Maybe have the grenade be weaker, but to compensate it would explode on impact.