Post tutorial RSS Localization for Steam: what are the best languages?

If you're developing a game for Steam and you don't even know where to start with its localization, fear not! Our team of game localization pros analyzed Steam data for you in order to determine which languages could give you bang for your buck on that platform.

If you're developing a game for Steam and you don't even know where to start with its localization, fear not! Our team of game localization pros analyzed Steam data for you in order to determine which languages could give you bang for your buck on that platform.

7 languages (including English) cover 65% of all Steam users. If you really want to share the love and sell your game all over the world, you should absolutely consider localizing it into the following languages.

10.88% of Steam users are Russian. They make up the second largest gaming population on Steam after the US.

Russian players also own a whopping 8,66% of the total games owned on Steam, and PC is by far their favourite gaming platform.

If you decide to localize your Steam game into only one language, Russian provides the biggest audience after English.

Localizing your game in German is a safe bet, if not a must, considering that Germany is the first European market in terms of game revenue.

Here comes one language you might not have thought of, but Brazil is the most important market in South America and English proficiency is relatively low in the country.

4.72% of Steam users are Brazilian and they account for a respectable 3.55% of the total games owned on the platform.

French is another pretty safe bet in the European market.

Localizing your title in French also gives you access to Quebec as well as French-speaking countries in North and West Africa. However, if you are specifically targeting French-speaking gamers located in Canada, we strongly recommend that you localize your game into Quebecois as well.

Chinese gamers mostly play on PC (57% of the Chinese gaming population) and with 4.86% of Steam users coming from China, your game should definitely be localized for that market.

Do some research ahead and if it looks like your game has the potential to find an audience in China, you know what to do next.

Chinese users own relatively few games (2.46% of total games owned on Steam) but this is probably due to the relatively low number of games available in Chinese on the platform at the moment.

Although “only” 1.43% of Steam users are from Spain, as much as about 6% of Steam users come from Spanish-speaking countries. This makes it the third largest audience after English and Russian.

Spanish is a pretty special case though because it has many variations in South America. Should you decide to tackle the Latin American market (which is by the way the second fastest growing region in terms of game revenues), we highly recommend that you go for specific locale versions.

Raise your hand if you would like to miss 65% of the Steam market! Anyone? No? Good... 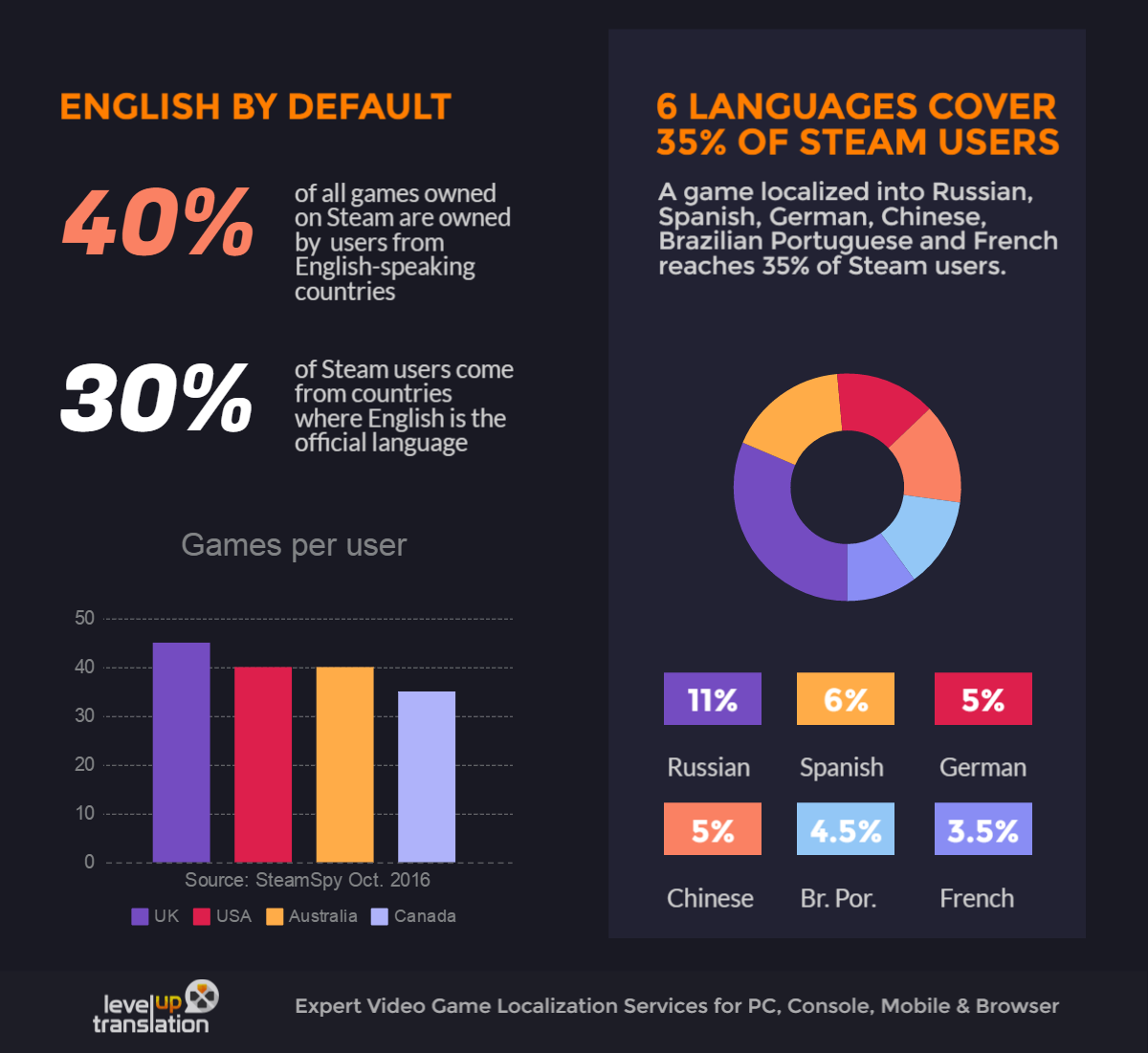 Other languages worth considering for Steam

Looking at the numbers, the Italian gaming market is far from its days of glory. However, if your budget can afford it, it would be wiser not to ignore the "I" in the traditional FIGS (French, Italian, German, Spanish).

Not only has Italy a relatively low English proficiency, but choosing not to localize your title in Italian might expose you to negative reviews for not living up to the expectations of Italian gamers. Many consider the lack of Italian localization an eliminatory criteria for playing a game, and just like many French and Spanish players, Italian gamers tend to swiftly uninstall a game if it is not available in their native tongue.

Given the share of Steam users speaking these two languages (respectively 9th and 11th population of Steam users), localizing your game in Polish and Ukrainian could be a pretty smart move.

It is also cheaper to localize into Polish and Ukrainian than into French, German, Italian or Spanish, so if you have the budget, go for it!

There is definitely an audience, but make sure your game can have an appeal for it beforehand. Translating from English to Turkish takes nearly 50% longer than translating into FIGS. Turkish is therefore relatively expensive when it comes to localization, and we only recommend it if your budget can handle it.

We offer video game localization and translation services for Console, PC, iOS and Android games into more than 20 languages.

If you're looking for passionate game translators who will pour their heart and soul into your game's localization, give us a shout and let's talk about your game!