Here is the second installment for the screenshots from Hell. Bare with us, it is still a work in progress.

This is a follow up article to Work in Progress: Hell from last week, if you missed it, check it out. This post will make a lot more sense.

The images were posted last night but I wanted to follow them up with this post to provide a little context. The first screenshot, scene below, overtly shows the new improvements we've made. We have removed a lot of obstruction from the foreground to make it a lot easier for the player to see enemies and navigate the playing area. We have also implemented an illuminated path so the direction is clear to the players. 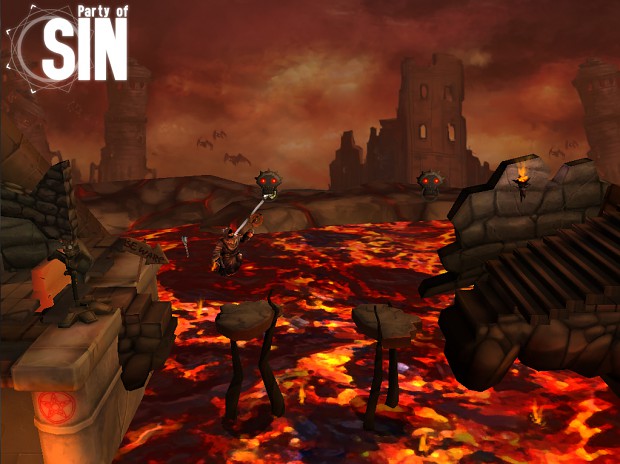 Some of the improvements that are still needed are related to the background and the lava. As of now, it is really bright and clips with both the walls and background. It doesn't look smooth at all. We haven't yet implement Overlorder's idea of inserting a glow around the lava. This should come into effect within the next couple of weeks. 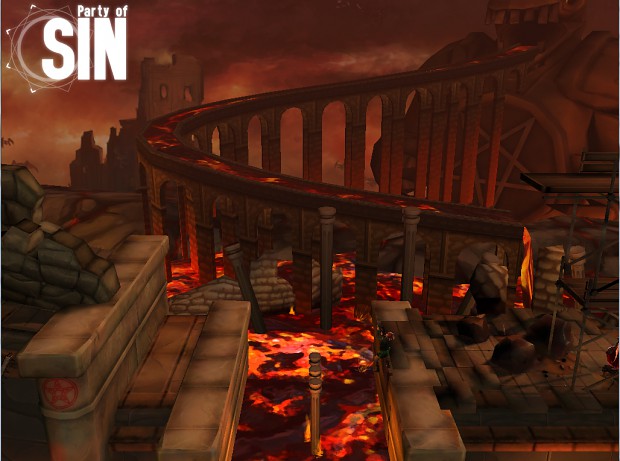 Another important implementation to note is the background fog. This reduces the emphasis of the background elements to the player. During testing we found that many players were confused with which props were in the foreground and which ones were in the background. If you were to compare this image with the previous one, you can see that the statue and the aqueduct are less clear.

There are still some improvements needed in the backdrop. The ruins still need to be detailed and the the flying animals have to be animated. All the in-game content we are showing is not finalized and is being used strictly for feedback. The comments we've gotten so far as helped with the development process and we hope they will keep coming.

Let us know what you think on our forums and be sure to hit us up on our website as we have some news announcements to make in the coming weeks.

Wow, guys! These are a massive improvement! I enjoy the fact that you've added eyes to the grapples, so they're pretty easy to distinguish in that regard, but they still seem to fade into the background a little bit in that first screenshot. Is there any subtle animation related to these? That would help them stand out.

As for the background fog, I absolutely love it. One of my complaints about the first set of screenshots you guys released was that the background and foreground were so hard to distinguish. The fog divides them perfectly so you no longer have to wonder what is a piece of scenery and what is actually functional.

The lava really looks much better, even without the additional hint of lighting. You can tell its a large moving mass, even in such a static screenshot. I'm looking forward to seeing what you guys do with the lighting.

Just for fun, I did a small before and after piece on my blog so people could see the improvement and how well you guys are taking concrit from your community. You can check it out here:

Still more to come. Thanks for the encouragement!

Things are really better now, good to know that you are improving this game so fast!