The idea of this game is based on modern times. When Muslims in America/Europe face discrimination. Even year after living between them they are now treated as terrorists. 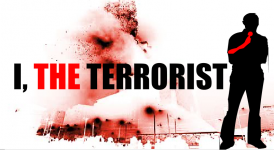 This game tells a story of a Muslim Pakistani "Muhammad Ali". Another day in the office, becomes a life changing event from him when a bomb explodes in a nearby cafe where he used to go daily. He becomes the prime suspect after CCT footage from the street revealed that today he entered with a package and didn't come out with it and some hours later the cafe exploded. When police arrives to make the arrest for investigation on terrorism charges, he makes a run for it. Now he has no other choice, He knows that under the new laws.. by the time he is allowed a lawyer, he would be tortured to limit. His family worried sick, and thus with no other option he is just running away. 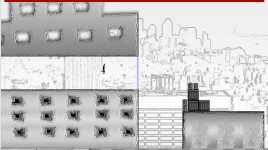 Gameplay wise it is small game, designed such in nature so that it is easier for people to play and complete the storyline. Its gameplay is inspired from the flash game Canabalt, where the character runs on his own and you just have to jump. Controls are slightly improved over that, that you have a sprint option too. So, to make longer jumps you can use that variety. Hopefully it will be both an interesting story and an enjoyable game for people to play.

From the gameplay picture I quickly realised that it was inspired from Canabalt. Very cool game, for this game you have to work a lot on the animations, like really well made animations of the character running and jumping, with multiple stances of running depending on multiple situations like if he just made 3 jumps in a row. It will make the game much more fluid and entertaining to watch and play. It also makes it more epic.

PS: Muhammad Ali sounds way to much like the boxer, I would consider changing the name.

yeah. the game has been done. the story is really what can make this special. i'm interested to see the final product.

I, The Terrorist Platformer
Related Engines