this will be a last update before the kickstarter campaign which starts on 11th of November. Most of the time goes into preparations. After the campaign, everything will get back to normal. I'll post some updates / reminders in between but nothing directly from the development. Because of that I've made this entry a bit richer with goodies. 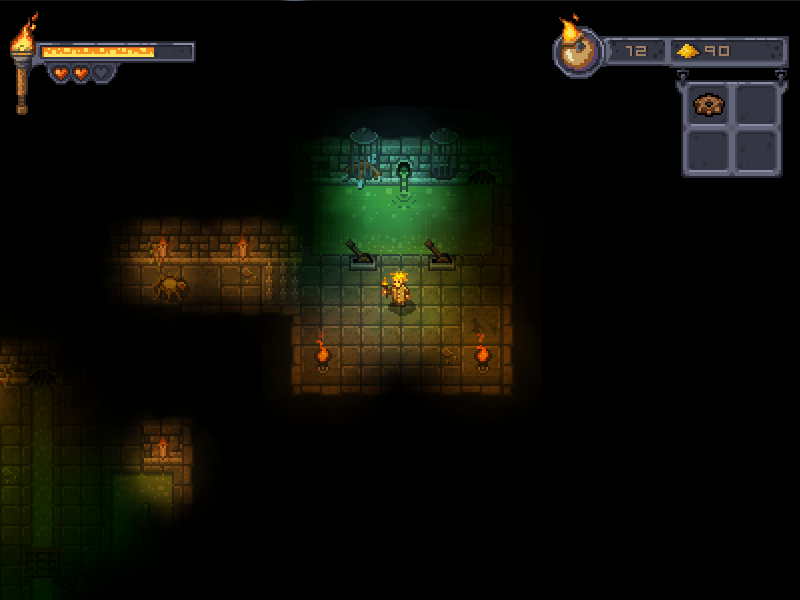 I've made more progress on the Sewers. Some new tiles, ambient and sewer monsters - tentacles. I always hated sewer maps in the game because they were hard. Always! (Titus the Fox sewers map anyone?)

There will be more type of sewer tentacles from melee to multiple projectile ones. Basicly, this is an immortal thing but you can make it go under water for few seconds by shooting it. It has deadly aiming properties though. Be careful ;)

Who doesn’t love secret areas, epspecially those in the dungeons? Every map will have at least 1 secret area and you’ll see how many you had find on the end of the map. The oldchool way right?

As you can see, there is a secret switch behind the barrels (left part of the image). Switch is hard to see and you can’t select-to-use it like others. So you have to look carefully and run into it for activation. Most of the secrets will have coins in it and other goodies like that but there will be ones worthy of finding – easter eggs and such you know?

Lighting the torch and flame pickups

So far you could toggle the torch without the cost. I wanted to leave it that way but the problem was that you could abuse the system. Some enemies follow you when your torch is off and stop following as soon as you turn it back on. You can imagine what happens with instant toggle? You can turn it off instantly but turning it on takes some time. I've made some tweaks to flame pickups as well. You can pick them up now by getting close to them and they also make this nice cute fly-up animation. 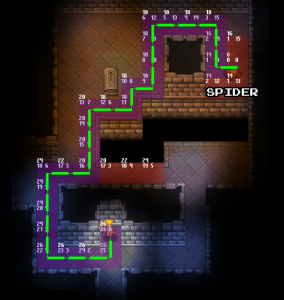 I was postponing pathfinding implementation for a long time. I had some custom-dumb-system for the enemies but not anymore. With A* algorithm enemies can find Courier pretty fast. I did some smoothing of the path that works for now but I want to do more different movements in the future. It’s the first time for me to work with the pathfinding and it’s a lot of fun but sadly I can’t afford playing and polishing right now. I’ve recorded a spider example to show you how it works. I’m turning off torch at the start and turning it back on later.

You can watch how A* algorithm works in my game here

What is this witchcraft of the map?! It’s sound testing map for Zdravko, the sound guy. I thought it would be interesting to show you how does he feel when trying sounds for the game. Walking through the parts of the maps just to try one sound can be nasty. Ask him, he can tell you the best ;) 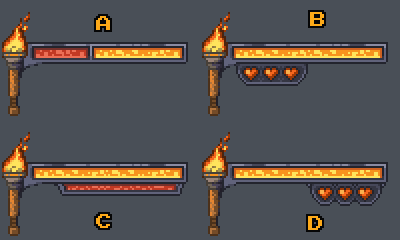 Few months ago I’ve decided to add health to the Courier for it was too hard. Early game tests revealed that it’s too nasty with only one health point. I was brainstorming to use flame bar for health as well but that wasn’t it. Health was needed, at least some more that 1 point. So there it was, a health bar. How to represent it? I’ve made few options and asked Facebook and Twitter followers for their opinion. B and C got the most votes, ~50% each. From there it was a hard pick since one health bar is represented by hearts and another with bar. My plan is to implement both versions which player can change in the options then. I’ll use B for the standard view most likely because it’s easy to see the difference between the flame and health + hearts are countable while bar is not. We are talking about discreet values here.

That's it for now. I really hope I'll see you for the Kickstarter campaign (11th of November). Spread the word among your friends / communities. I'll need every help I can get :)

It seems a very nice game, I can't wait to be able to download:)

A beautiful project:), you have some great ideas, I can't wait to try the game

Thank a lot everyone :)

Short demo-preview will be available when the Crowdfunding campaign starts and you'll be able to give it a try.