Starting to do weekly updates for Crea as we near our beta release. Here is one update for you!

Here again with a new recap. I am pleased that we managed to finish most of what we set out to do this week.

I finished upgrading the crafting system to make it possible to provide equipment as an ingredient. While I was at it, I cleaned up the crafting, equipment and talent UI. Both the crafting and talent UI used dropdown menus to select your current category/talent. At first I thought this was a wonderful idea because it is extremely expandable making it mod friendly; however, after time I have realized that this is a pre-optimization and 99% of new items could fit into the existing categories. 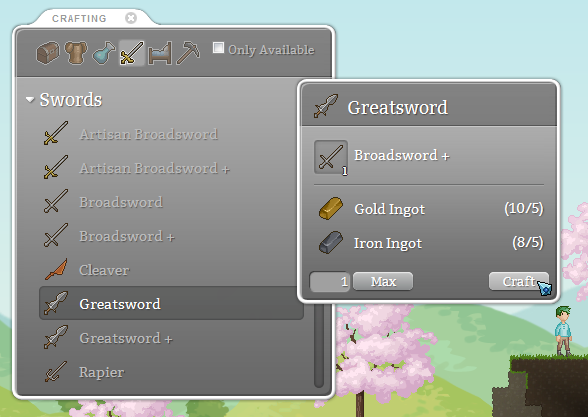 Max spent the majority of the week working on monster spawning. Now spawners are permanently placed in the world and, when taken down to 0HP, instead of being destroyed the spawner is temporarily disabled for 15 minutes. We have plans to give the player the power to destroy spawners and have them respawn much more slowly than what we had before. This is one of those things that needs lots and lots of tweaking to get just right.

The other big task I worked on this week was adding in water to the world. The simulation was a little broken from months of neglect and once I did get it back up I spent some time smoothing it out. A large chunk of my time was spent on getting the water to be saved with the world and transmitted to clients during multiplayer. I began to incorporate it into gameplay but only got as far as having it affect player movement when I made the decision to wrap up other things so we could release a new early beta build today.

Wrapping things up involves lots of tiny tasks remaining from the larger features such as ensuring that all new items can be obtained one way or another. There is also the task of fixing the bugs that we have created over the last few weeks; fortunately there aren’t too many of those!

Over the next week we are going to be focusing on finishing up several features that need some love.

We will hopefully get to a few smaller things on our list as well but we have lots of planning to do before Max heads back home on Saturday. We have a great momentum and if we can keep it up then the next beta phase is just around the corner. Don't forget you can sign-up to be notified of when we launch!