After a long time we finally have some news for you! Close combat is the newest feature for CrossCode! We even have a video for you showing the close combat in the final challenge of the TechDemo.

We finally have some updates for you! And since we did not had that much to tell we made a video to show you the newest feature we implemented: Close Combat.

Close combat makes it possible to attack multiple enemies at once. This is especially useful when surrounded by a large group of enemies. To demonstrate this have a look at the following video:

Pweee~ That was close… those mice will always hunt you down!

You can attack via close combat by pressing the right shoulder button without moving the right analog stick on the gamepad (These are the controls you can see in the video). With mouse and keyboard you click the left mouse button close to the character and she will commence an attack. To get used to the range in which you have to click, a circle will appear around the protagonist whenever you make a close combat attack: 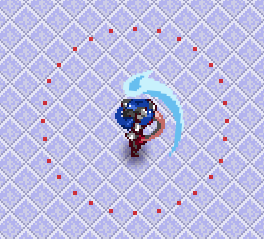 You will be able to switch off the circle via an option if you feel confident with the controls.

So what else? We are currently working on a new combat feature which we call “Element Mode“. More information on this feature at a later point when we can show what this mode does!