This week I started off with the biological side of ants. This involves two major parts. First, they need to be differentiated by caste. Second, eggs grow via various stages into an adult ant.

There are five castes in the game. Queens and drones for the reproduction, and workers, soldiers and thinkers for working on the station. Queens will lay an egg every day. Drones will provide insemination. Workers do the hard maintenance side of the station (engineering, nursing, farming). Soldiers keep order and take command functions. Thinkers, obviously not a biological ant caste, are doctors and scientific researchers. 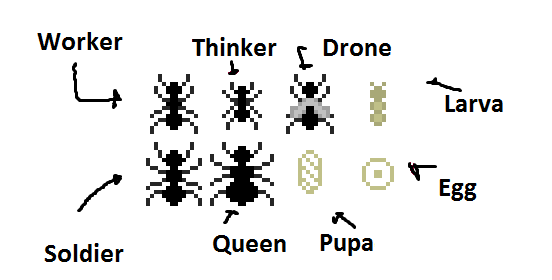 Castes also differ in the acting speed (Queens go slower, drones go quicker), and their life span. Drones die after a few months (so they don't perform any useful work, run around like crazy and die young, I suspect this might become a disliked caste by players). Queens live for over ten years. The other castes are in between.

I implemented jobs to accompany the castes. As mentioned earlier, caste determines the available jobs. An ant is assigned one job. This is a conscious gameplay decision, to only allow one job per ant. When I implement needs and satisfaction, ants will identify with their job and job satisfaction is an important metric. There are three jobs at the moment: construction, hauling and nursing. They're all worker jobs.

Going on to the reproduction. Queens lay one egg every day. Its caste is determined at that point. If the egg is not inseminated it'll become a drone. Otherwise, it will be a worker, soldier or thinker. You can request the next egg to be a queen, so you will only get more queens at your own request. This is important, since the colony will not appreciate the dying of unborn young, so don't have more queens if you cannot handle their egg production capacity.

From the moment of egg laying, nursing workers will take care of the young. Eggs need to be in a heated room for about a week, and then they turn into larvae. Larvae will need to be regularly fed by the nursing workers, and this stage lasts about a week as well. Then, the larvae turn into pupae and they need to stay in a dark room, again for about a week. After the total of three weeks, the pupa hatches and you have a new ant. Moving the young to their correct conditions, and especially the feeding of larvae, takes a lot of nursing workers. This limits the amount of queens you want, since they are guaranteed to lay an egg every day.

The gif shows the process from egg to ant, with extremely shortened times per stage. The left room has heating elements installed at the top. All rooms are dark, but only the rightmost room needs to be dark for the pupae.

Last week I implemented a rudimentary space suit. I improved the system to allow for three suit types. You have space suits (for space, obviously), thermo suit (for conditions of extreme heat) and plasma suits (for plasma filled areas, again, obviously). In addition, each suit has an air supply. When this runs out, ants will go to a suit refilling tap, which is connnected to an air tank, to refill the air supply of their suit. 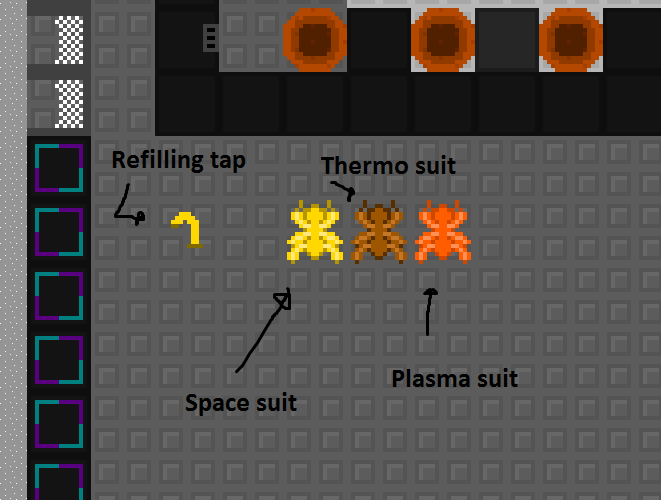 I implemented a fifth utility connection system: a tube system for the moving of physical objects. I was afraid that hauling would become a very dominant activity. To limit the amount of haulers, you can implement a system of tubes with delivery boxes. This will allow hauling workers to send stuff to other parts of the station. See the gif below how two hauling workers quickly move the steel sheets via a simple tube system.

All the systems with some form of piping (electricity, atmospherics, liquids, plasma and the new tube system), had a limited choice of 25 configurations for the nodes on the piping units. In addition, choosing any specific configuration took a lot of searching for the right unit in the list. So I designed a more dynamic system, where the players can make themselves any of the 120 possible combinations. The resulting piping unit is already shown in a little square next to the menu. See the gif how this works in practice.

Finally, heartvine (heartvine.tumblr.com) made a few art assets for me (thank you!). I implemented them in the game and I think the result is really impressive. The gif shows:
- Ant bed-pillows
- Floor tiles
- Power generator
- Green pump (liquids) and red pump (gas)
- Power battery, standby and charging

I'm not sure yet what next week will bring. As always, feedback is very welcome.

Very original bro,
i will wait for you.
^^

Thanks. :) Working hard to get there.