A list of some of the anti-cancer scenarios I've been planning and designing.

I’ve been planning some biological scenarios to play, and I’d love to hear some feedback or suggestions about these ideas! 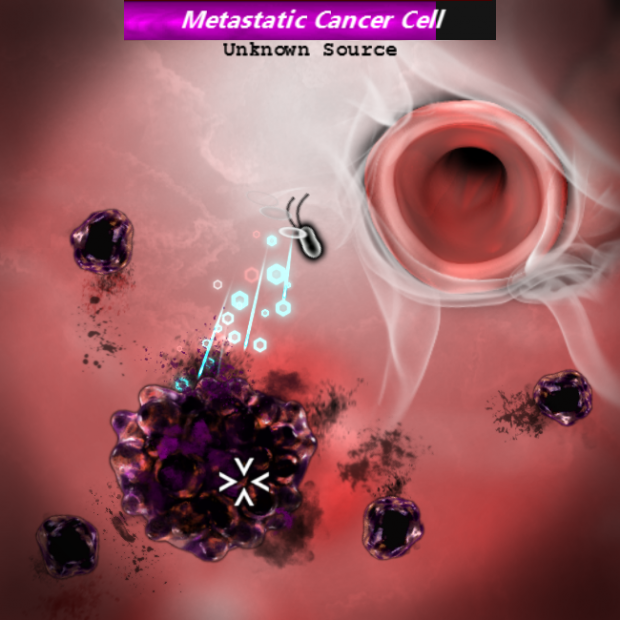 Cancer is not a typical disease. Caused by cells that ignore the body’s normal signals, any tissue can potentially become malignant. While there are several characteristic properties that define cancerous cells, my game will focus on those that are the easiest to explain and show.

The ability to invade neighbouring cells by travelling via the bloodstream is called metastasis. This occurs when malignant cells lose their surface attachment proteins and begin to circulate throughout the body. When one of these wandering cells embeds itself in a organ far from its origin, it has metastasized.

In my game, your goal is to chase down a metastatic cancer cell before it can deposit itself in a distant organ. Due to the genetic instability of the cell, it produces toxic levels of malformed hormones and cellular signals. Dodging and destroying these signals while attacking the cancer cell is the key to preventing its spread.

Another hallmark of cancer cells is the ability to ignore signals that would otherwise cause it to die. Body cells (with some exceptions) are programmed to self-terminate after they have completed their ‘purpose’, or simply through aging. Cancer cells are resistant to signals from both the inside and outside.

Your goal in this scenario is to stop a newly-formed malignant cell from becoming immortal. Nearby immune cells will release death signal proteins that you must ‘force-feed’ the cancer cell. Meanwhile, cancerous mutations within the cell accumulate and resist the signals that you deliver.

Ionizing radiation is one of several treatments used to slow or eliminate cancer growth. One treatment that doctors use is called Brachytherapy or Sealed Source Radiotherapy. This involves implanting a radiation source into the tumor tissue to irradiate and kill the cancer cells.

This scenario requires you to infiltrate a well-developed tumor and deploy the Radiation Source within the centre of the growth. You must drag the source through the toxic interior of the tumor, using it both as a shield and weapon against enemy cells. Once deployed, you must escape before the source activates a pulse of deadly radiation and destroys the surrounding tissue.

Well, mostly because I love biology and there are a lot of very cool things that happen in the body. Some of them translate pretty well into game form, and I hope I can introduce some of the concepts to people who would otherwise not know about them. Plus it's satisfying to fight back against diseases.