This week update is about generating sci-fi dungeons for Void Raiders, showcasing templates for first mission area, the "Void Industries complex". We ll discuss gameplay impact of this feature as well. 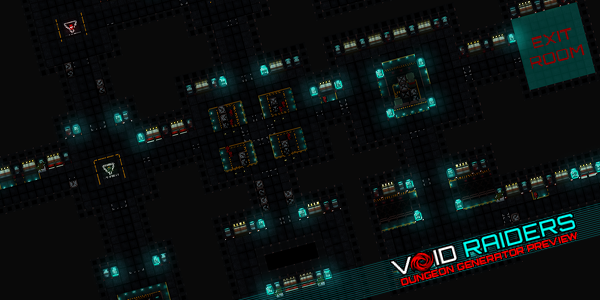 Another week passed and im back with now traditional monday update. This week will be kind of boring as i have no new weapons and exploding corpses to show you. Still, this week addition is really important for the game as it ll enrich gameplay greatly with feature thats pretty much standard in nowdays top-down shooters.


Yes! Now game can generate unique dungeons every time you play it, following patterns for given area. While generator is not yet finished and there is still a lot of work left, its in the state you ll encounter if first public test version of the game. While implementing of this feature delayed the test demo by at least a week, I belive its feature worth waiting for. 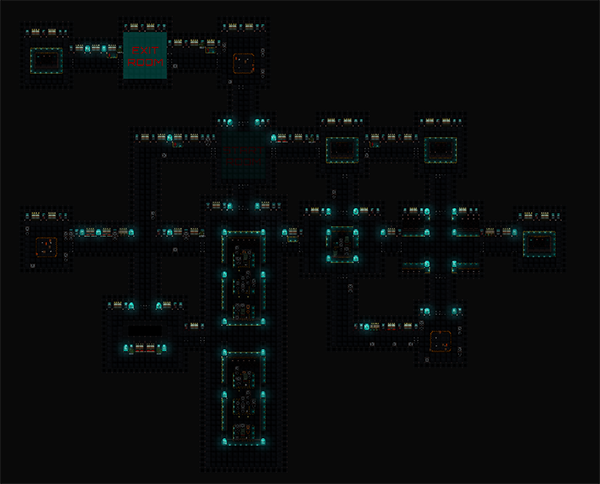 
Before implementing random dungeons the plan was to place place player in to premade "arena" like levels to face endless tide of enemies while trying to acomplish mission objectives. When objectives were completed, boss was spawned, you killed the boss, grabed the loot and tada, mission complete.

With random generated dungeons i had to rethink whole concept as in previevous case i had all enemy spawners and powerups carefuly placed to force player moving around like for example QuakeLive players are running in circles around map to collect powerups as soon as they spawn on the map. Obvious difference in Void Raiders was you were almost constantly swarmed by hordes of enemies and you were trying to survive while acomplishing the mission in order to spawn boss.

New concept is still based around endless tide of enemies, however without ability to carefuly place the spawners i had to rethink whole respawn - thing a bit.
At the start of the level floor objective is generated and placed in to the room farthest room from exit. Be it getting eye of security officer to be used later at the retina scaner, grab the simple keycard, hack security keys, blow up generators. Or non-room related objectives like killing certain amount enemise, killing miniboss...you know, the more or less ussual stuff. 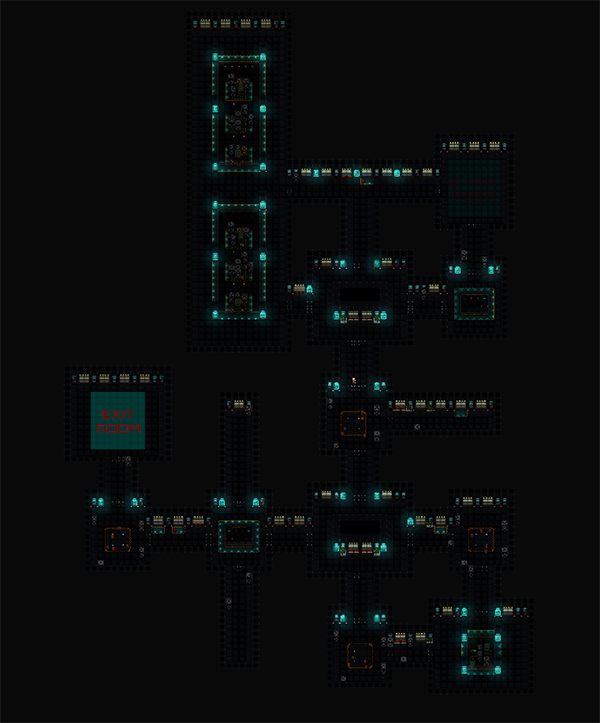 The game continues to spawn basic enemies whitch follow you around a map, trying to shoot you in the face. As now, the spawners are not placed carefuly i had to give them little cheat, the sprint ability whitch is trigerred when they are not visible on screen. Its very important as this keeps the player bussy and we can still force player to move around and keep him/her under constant pressure.

In addition there are enemies whitch are spawned in each room of the dungeon during building. These enemies are not actively seeking player and ll roam around their room guarding powerups and other valuable stuff,


Final impression will be up to you to judge, but in my opinon the game is less intense now, however much more interesting and while random objective generation is still not implemented(next week, i promise) I think the trade of premade arena like livels for unique dungeon each time was well worth it. dont you think? Let me know in comments!

Oh and if you are in to technical stuff you can check dungeon carver in action on video below!:-)

Thanks! glad its not that bad, but still have couple of ideas for improvement, however hope this version ll be enought for first public test.