Talk about feedback, rework of Bladedancer character and new dungeon that ll be in next release.

Hello everyone! After one week long break comes another monday dev. log update! Currently, the game is in the half of the way towards next alpha release, but lets talk about previous release first.

I must say this release was great! Much more solid than 0.3 release, almost bug free and improved with a lot of game design adjustments based on watching lets play videos and your comments! It was you, the players who helped me with this release most and you deserve another thank you!

With all that exciting stuff there is still a lot to be done, and even more to be improved, like adding more contrast between floors and walls to make clear whats walkable surface and whats not as its probably worst issue players have with the game currently.

While I was excited about Gudrun when last version was released and even made "tutorial" video to help players understand how she is meant to play as an advanced character i clearly failed to explain her properly. Watched few more gameplay videos and clearly saw, she is not fun at all. In addition, when i was designing new enemies i felt like i walked right in to game design trap with adding melee character in to top-down shmup environment. To add on top of that bad feeling, there was not much feedback about her and when there is no feedback, it usually means it sux, but people are just kind and dont want to hurt your feelings. 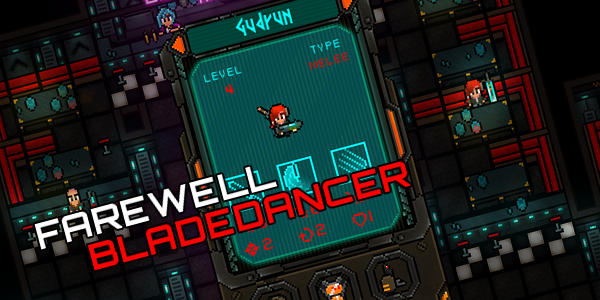 The decision was made that the norse butcher known as blade dancer have to be reworked. In the end of the redesign process we did not even have to replace everything and in fact the whole Dronemancer tree remeained same(just one talent ll be slightly changed) and the Bladedancer branch kept 3 out of 7 original talents.

Gudrun kept her sword, kept drones and in addition, she received automatic plasma shotgun! Yes, she can now rain storm of pellets on the enemies over short distances, she can dash and aoe attack like before using furious charge talent, and she can still damage enemies while dasing as bladestorm talent was kept as well.

The Bladedancer branch was renamed to Assault and along 3 blade related talents there are 4 improvements aviable for your shotgun. Be it bouncer shells, range imprvements, or plasma pellets for wider spread and longer range.

As next release is away just few weeks, its time to tease you with some of the content from next dungeon im currently working on. I dont have a name for it yet, but you ll fight hordes of Rippers, complete new set of objectives, defeat the new boss and most importantly you ll get the new loot!;-)

Dont want to say more about it as would have nothing to talk about next week so hopefuly couple of gifs ll do its job and keep you attracted till next monday update!;-)

While waiting for next release you can shorten your time by checking latest work in progress upload by Bocuma as he has made quite a progress again working on ingame music! Thanks for reading and see you all next time!

Love the new content - the music becomes too repetitive, too fast.

Thanks! And there is more of it comming! Regarding the music, thats question or suggestion to Bocuma more than for me, but please note these tracks are just work in progress and serve just as a preview of final product. Thanks for comment!

Hi :) As mentioned below, the initial tracks on the alpha release are much shorter than what will be on the final version. I am in the process of extending and expanding the tracks. Previews and snippets of this progress can be found here Soundcloud.com cheers for the feedback tho, greatly appreciated :)

As for the music, I'm really digging it. Any chance of an OST when you go full release with the game? :P

Hi Gamescroller! Thanks for kind comment and question!;-) However im afraid Bocuma ll have to answer this as its up to him as author of the music and we touched this topic just briefly as its too early to talk about OST release. But yes, there ll be way to get the music separately, im just not sure it ll be along with the game.

Hi Gamescroller, so glad you are digging the music and yes there will a release for definite on Bandcamp once to coincide with the game release. You will be able to find it here Bocuma.bandcamp.com once completed. Oh and just to note there might be a few extra tracks or versions of songs that I will be including on the release that mightn't even making it to the game. So i will be treating all extras as bonus material. Thanks again :D

Hey Spitfyre! Thanks! Next release ll be here houpefuly within less than two weeks from now, delivering reworked Gudrun character and new dungeon with new eneies to shoot at. Glad you are looking forward to it!;-)

And once again "so much shakiness!" © :D
And whole music track is so cool! I even danced a little ^_^