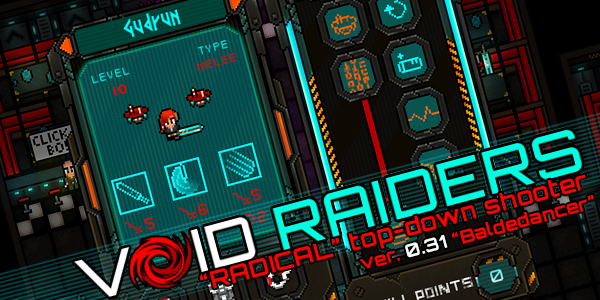 It took bit less than two weeks of work and collecting your feedback and here comes, first update for Void Raiders! Its main feature is Gudrun the Bladedancer, the first melee character of the game. Various visual enhancements like items and objectives hightlights, death effects, level transition effects, hit effects, enemy muzzle flashes and some more details. Several bugs were fixed as well, game should no longer crash or give "out of memory" errors with outdated directX(i still advise to update it if game ask for it), grenades no longer crashes the game and many others which was reported by players.

Difficulty was reduced greatly, the reason behing this decision was that "Void Industries Warehouse" is meant to be introduction dungeon, and when experience scaling ll be enabled players should beat Big Bad Guy on floor 3 when their character just reaches level 2.
I promise, original difficulty will return with new dungeons and first of them will come in next update, unfortunately i dont have ETA for it right now as there are too many variables to give you guess, but it should not take more than 3 - 4 weeks in worst case.

As Gudrun seems quite difficult when played first i decided to make some kind of introductionary video to help you understand all of her abilities properly. While Boris was meant as first and straightforward hero, Gudrun is quite oposite, she is meant to be complicated and weak when in hands of unexperienced player, but if you ll have some patience with her, she ll reward you with her outstanding ability to clear whole dungeon floor within minutes.

Sorry for not using my voice in the video as i did not wanted to scare you off with my strong slavic accent;-)

Boris remained pretty much the same, but thanks to the lets play videos whitch started appearing on the youtube i observed there is serious ammo issues. Thats why Boris received "Never out of ammo" trait. Its automaticaly activated when you run out of ammo and it drains energy instead of the ammunition. Drawback of this is that you cant rapidfire, and basic attack cooldown is doubled, sou you basicaly have half DPS. Hope this ll help with frustrating ammo situations when playing Boris.

Hope you ll enjoy this updated version of the game even more than previous one! Please let me know in case of any issues with the game. Error messages, suggestions, opinions, everything is more than welcome as its you, the players who did the most work on this update, without your feedback this would never be possible.

Thanks for reading, downloading, supporting us and wish you great weekend!

I'm scared of downloading!... it's so much stuff again! But I see tutorial. Maybe it will help? :D

Well, Gudrun is not really that hard as i added skill descriptions to the game, and video guide should help as well. You just need to practice with her for couple of minutes and then you should get the ressults;-) Thanks for comment btw.!;-)

Great update! Perhaps I'll stream some on my next Twitch stream. See how it shapes up :)

Thank you, that would be great source of feedback!