Its monday again and that means im back with regular dev. log entry here on indieDB! Today we ll talk mainly about Big Bad Guy boss fight design and in the end i ll finaly announce release date for first public alpha build!

Big Bad Guy is the first boss you are going to encounter in Void Raiders game. He is meant to be quite easy, but dont get me wrong, while he is not that smart, his firepower is more than adequate to make up the lack of his brainpower.

Lets talk about the boss room for a while first. As you can se on the picture, boss room is square shaped and while boss is spawned in the middle, player starts in the top mid spot of the map. Boss will always stay in the mid section however he is not static so runing in circles and just shooting in the middle of the room is not an option in this case. 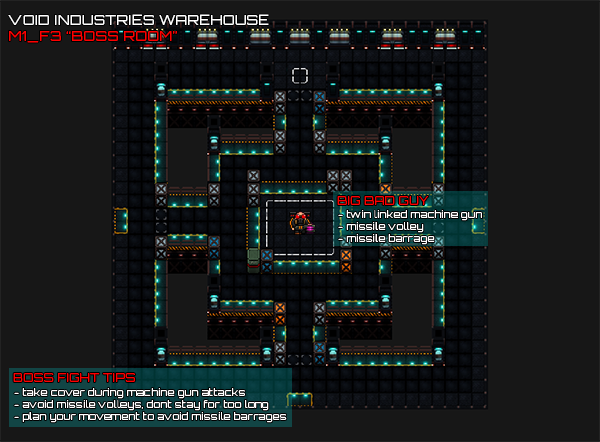 Boss room offers plenty of cover both in outer and mid sections and belive me, you ll need to use it pretty often to avoid boss machinegun attacks.

There are couple of medkits on both sides of the room and additional ammo boxes in the bottom mid just in case you ll make a mistake or two and you ll need to replenish your hp pool or ammo supply.

there are explosives packed barells as well to spice things a bit and while their explosive raidus is not very big, every scene certainly looks better with frequent explosions:-)

First ability is kind of obvious as most bosses in video games have some kind of basic attack. In this case our boss fires bursts of projectiles from his machine gun. They are not hard to dodge if you keep respectable distance or have quick enought reflexes.

Second ability is volley of missiles. Every time you hide from line of sight and boss have cooldown up on this ability he ll fire missile volley in order to smoke you out of cover right in to his machine gun fire. Again, ability is not so dangerous on its own, but combined with boss machine gun fire and bad timing from player it can cause serious trouble to player HP pool.

Third and last ability is missile barrage. Its more or less variation on missile volley but have much much wider spread. This ability has 30 seconds long cooldown and when its up boss will target whole mid or outer area of boss room, depending on where are you at and fires devastating barrage of explosive missiles. Again not so hard on its own but combined with machine gun fire and missile volley it adds at least some adrenaline to the fight.

Pretty easy right? Big Bad Guy was designed as first boss encounter in game. Its not hard at all, but it ll punish any player thinking that staying in front of the boss and just mashing fire button is enought to deserve chance of getting the loot.

Yes! Its finaly here! Not yet to be accurate, but its near, and it ll hapen most probably next monday! I want to approach comunity as open as possible and i plan to release updated builds every week or two as in the end all that matters is your opinion.

Right now the game is almost ready, we have nice gameplay loop, one playable character, finaly implemented mouse controls in menu, just want to add little more polish and simplify the menu system as im not so happy with current system where you have to select hero first, then open another menu to spend talent points and then visit another menu section to finaly pick mission and start playing.

Hope you are looking forward towards next week and promise i ll try my best not to disappoint you!

Thanks for comments & have a great day!

Thanks man! Glad you apreciate the idea!

Love it! Look fantastic! Excited to see the next week's build!

Hi Tim! Thanks and hope i will not disappoint you. I belive the game plays great allready, but have to work on a menu system a bit to present something more fitting for this kind of game.

I have featured this on my next news update blog (02/06/2015) and am very much looking forward to blasting this guy!

Hi Adam! Thanks for your help!I ll try to do my best to reward it.
Well it looks like Big Bad Guy fills his purpose well as boss whos not looking challenging is not true boss;-) In fast he is realy easy(bit harder with melee characters)if player is watching whats going on around him.

Read public alpha, got really excited. Read the next sentence, was disappointed. I have to wait one *whole* week for the game :O

Hey Drjd! Sorry! I hope i ll make it up to you next week. It ll contain just fraction of whats planned for full version but i hope it ll provide enought fun for hour or two.
Thanks for your interest!