A new GUI system is being implemented for the farming and upgrading system. Check out what it looks like!

To maintain the aesthetic of simplicity, I began working on a new minimalistic GUI overlay. When you select anything on the environment, a menu will pop up with only TWO choices. Depending on the object, you will have the option to either farm, build, or upgrade it. The second choice is a cancellation button. Check it out below: 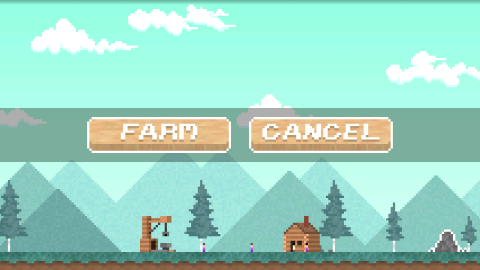 You may notice two completely new features from this screenshot. The first being a rock of some sort (on the right). This 'rock' is actually a mineral deposit for building other things such as that building on the left. This structure is the new 'Mine Shaft' which collects minerals at a consistent rate. The more you upgrade it, the faster it collects. Here is an animation of it:

I think it looks pretty cool and archaic. Afterall, you just survived a plane crash; technology would be very limited. When I'm designing these images, I can't help but think of Gilligan's Island (Older people should recognize that show).

Here is what it looks like when selected in game: 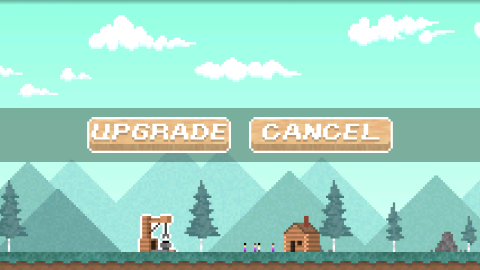 I'm currently working on a new system that selects the nearest person to complete a task. As of now, the people are pretty dumb in this game. They will walk up to the objective, and just wander around like a bunch of idiots. I really want to begin working on a quicker way to farm trees and minerals. Perhaps multiple people will stack up on a tree and complete the task faster. I'll play with that for the next update.

Thanks for reading this update! I've have received lots of exciting feedback this week from you guys so that's pretty cool!

i'm a new youtube commentator and i just started my own GAMING CHANEL you should check out my chanel!
I play horror game to!!
https://www.youtube.com/subscription_center?add_user=LLamaPurple

Wow, desparate much? How's about just making a good channel instead of linking people to your channel from a completely unrelated thing, not to mention the subscription popup already in the link.

Kinda have to assume the upvote you got was either a mistake or you making a second account to do so.

Looks good, although the buttons being that large on a tablet would be a little crazy sized but, would work fine on a phone though.

I designed the buttons so that they will stay the same size for all devices; meaning, they will be much smaller on a tablet. I planned ahead haha

This would work great if it were placed vertically because, if you're me with a tiny Ipod touch, it's much easier to move your thumb & fingers up or down with one hand rather than stretch your thumb between two slim horizontal buttons... Just my preference though either way would work nicely

you must have really small fingers...

I gotta ask, how did you set up that white outline on the selected building? I have the same thing going on in my game and I've had to drawn a separate sprite for each outline. Are you doing the same or something more efficient?

Instead of physically drawing a new sprite with a white border, I have the game create an empty bitmap with 2 more pixel in width/height. I then fill a white pixel in to the top,right,bottom, and left of each pixel if the alpha value is > zero (aka, not transparent). Message me via email if you'd like to see how I do it.

Excellent! I knew it could be done that way, but wasn't sure how. It doesn't take too long, computationally, to make them that way?

As long as you are only calling the bitmap rendering 1 time at the beginning, it'll run just like any other image type on the screen. I even tested a constantly updating bitmap, and saw no fps drops (the mine-shaft needs this because the sprite changes constantly).

Alright. Thanks for the help!