Variant Items is part of the "Variant Series" of mods. Most of the items going in to this merge are previously existing items and their authors are duly recognized and credited for their great work! 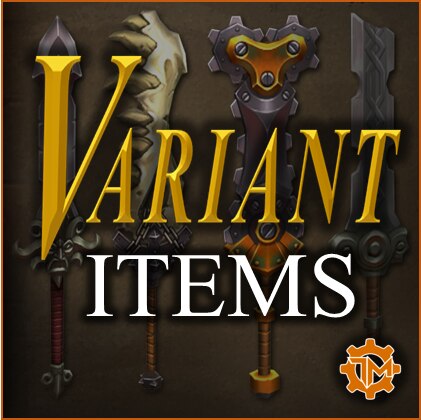 Variant Items is part of the "Variant Series" of mods. Most of the items going in to this merge are previously existing items and their authors are duly recognized and credited for their great work! There are also a very few items which are making their first-ever appearance in this mod.

Because there is soooo much stuff out there, this merge will be built in phases with phase 1 concentrating on weapons. Future phases of Variant Items will include consumables, equipables (tomes, spells, etc.) and socketables.As with all merges, the big benefit is to have lots more content without hitting the 10-mod loadout limit. But we thought it would be important to also consider this a "tribute" mod to all the creative modders who gave us so much stuff and so much fun with their work. In keeping with that, this merge will even include modded items originally made for Torchlight 1, and where it makes sense we are using each mod author's name as part of the name or description of their items ;)

Please see the Change Notes of each upload, for info on what mod content has been merged-in.Original Author PermissionsThis mod merges content from authors who gave us direct permission to do so OR, in the case of modders who have been absent for years, their work has been included with an IMMEDIATE TAKE-DOWN COMMITMENT in case they come back on-scene and ask for their work to be removed from this merge.

We hope this mod gives you as much fun as we had making it!