An updated 3D model and a little showcase/präsentation of how i'm dealing with the loading times of the huge amount of 3D models.

Well, i didn't have enough time to implement enough features to showcase them in another video.
The current features which i implemented since the last update was a new Parkour move and a Online Highscore.
The online highscore is still work in progress. I can connect the game to a mysql Database and read/write Data from/into this database. But it is still far from finished.
I will show this in another video update.

I also updated the 3D Model of the character a bit. He is a little bit taller and has a different anatomy of his legs.
I also put up a video of how i'm dealing with the loading times of the 3D models.

The 3D character model was updatet a little bit.
Most noticeable are the legs. they have a different anatomy then previously. Because of that i also had to update the Rig of the character. Now the legs are more agile and flexible.
I tried to make them look more "animal like".

Here is a Screenshot of the current 3D model: 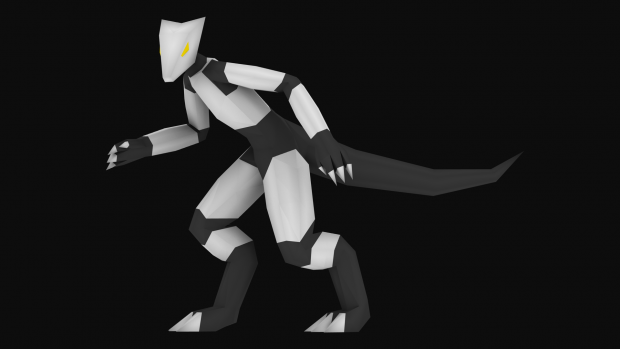 You can see the comparison of the old and new model on this screenshot: 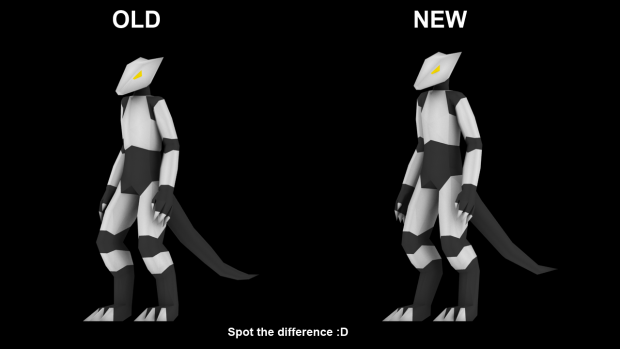 Some of you (which are using game maker) know, that animating isn't easy.
Especially because Game Maker doesn't support skeletal animations out of the box. There aren't many alternatives. Because of that, i'm using a frame by frame Technique to animate the models ingame.
Quake 1 was also doing animations the same way. Each animated Frame of the character was exported as an own 3D model and then imported into the game. This models can then be played in a reasonable speed in a sequence to give the immersion of an animation. (Similar like a 2D sprite animation).
Of course this technique has drawbacks like the higher memory consumption and loading times.

Game maker isn't very fast at loading 3D models. Especially not with a custom made gml script.
What i do, is to export all 3D frames of a model as an .obj model and convert it with a custom made tool into game makers native model format. This gives me a huge performance boost.
As an comparison:
- 30 obj models took around 16 seconds to load.
- 30 .d3d models (native format) took around 0.5 seconds to load.

You can watch this video for a better explenation:

I also spent nearly a week with the "simple" task to port the game from GM8.1 to Studio.
Ths was one of the worst programming experiences in my entire life.
Studio doesn't seem to be ready for "bigger" Projects. Mainly because of the relatively huge amount of bugs. I'm sticking to GM8.1 simply because i know that practically all Bugs which occur in developement are my fault and not the fault of Game Maker.

See you in the next update. :D