Q: Just how far are we. How soon can we expect to see the finished product or at least another beta?

Hockey: Well, lets not get too far ahead of ourselves, but I would bet on a "Christmas BETA 3.0"

Q: What kind of gameplay will the mod feature? Will we be seeing the 'behind-the-lines' action of Republic Commando, or more of a front-lines combat game?

Balkoth: It's going to be a mixture of both.

Hockey: I would have to say, 60-40 with a LITTLE more front lines than "Black ops"

Q: How many levels will we expect to see? Will they still follow the general flow of Republic Commando with a prologue and three planets?

Balkoth: Most likely, I'm not 100% sure as of right now what levels we have "set in stone" per say but It'll probably be a good mix.

Hockey: Well, we don't have a definite number, but I have already made 5 maps....

Q: Can we expect to see online play?

Balkoth: I know we've been talking about it, but for now I think we're mainly focusing on Campaign mode.

Hockey: Our main focus is campaign now, Multiplayer is secondary, but defenitly!

Q: Should we be on the lookout for any easter-eggs?

Balkoth: Oh of course, there's quite a few of them I can think of off the top of my head.

Q: Around how many re-textures have you done?

Q: What exactly do you do?

Balkoth: I Do some of the skining, and voice Alpha's squad sniper, Ven'vul.

Hockey: Well, my computer is the "Master Builder". everyone sends me the files, and I plug them into the game. I also do a little Skinning, have done most of the mapping so far, and is responsible for all the new Models put in game. I will also hopefully be voicing Advisor.

Q: How comprehensive will the mod be; can we expect to see new animations and character models?

Hockey: Well, as far as STATIC models, yes. Animations and player models are just A LITTLE farther down the road
of Discovery.

Balkoth: "In the absence of orders, go find something and kill it." -Field Marshal Erwin Rommel

Hockey: "Never argue with an idiot, he'll drag you down to his level then beat you with experience." -Halo 2 Matchmaking

I'm afraid I can't say too much here. I debated it with myself, pleading for the admin side of my to let the community see more, but alas, we're dark. Fortunately, do you get to see a video courtesy of Hockey.

Keep in mind, this is just a pre-alpha version, so the end product will likely be infinitely superior. In fact, even now I'm trying to get Hockey to get rid of the turret which is incessantly firing away in the background. Things you can expect to see in the next version:

This is a very early look at the new HUD. Notice the rangefinder. Keep in mind that this is an early preliminary screen-shot (literally, it was taken yesterday), and this will not be the final product. Suffice to say, you will be able to see the rangefinder in-game.

Into the Design Process... Stormtroopers

Told 'ya it wasn't done!

Here's a quick looks at the "design" process we use...

Commander Dimal: [REDACTED DIALOGUE SCENE] Even about 1 or 2 years after the Clone Wars the storm troopers still used Phase II armor, but it was all white.
Hockey: stormie:

Ulmont: Can you modify it so its the Kashyyyk trooper from TFU? EX: 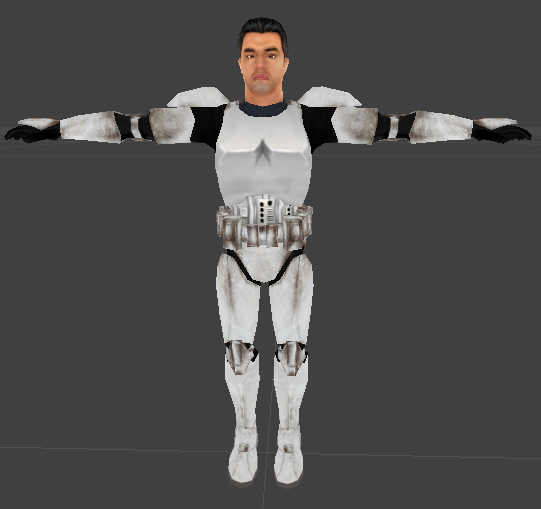 Hockey: Nice stormy armor! Mind if I nab it?
Mandalorian Mercenary: Sweet stormie! D'ya think we could..polish up his armor though? I've never seen a dirty stormtrooper :p
Hooper: Same Here :)
Ulmont: Yeah, I'm just using the base clone trooper out of convenience, I'll switch over to the Pristine one when it's finished.
Ulmont: 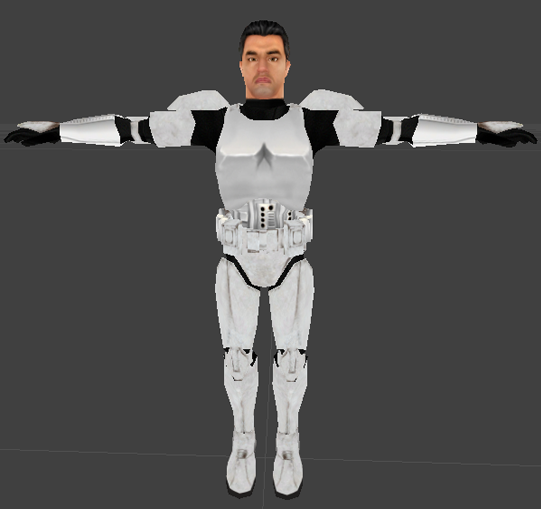 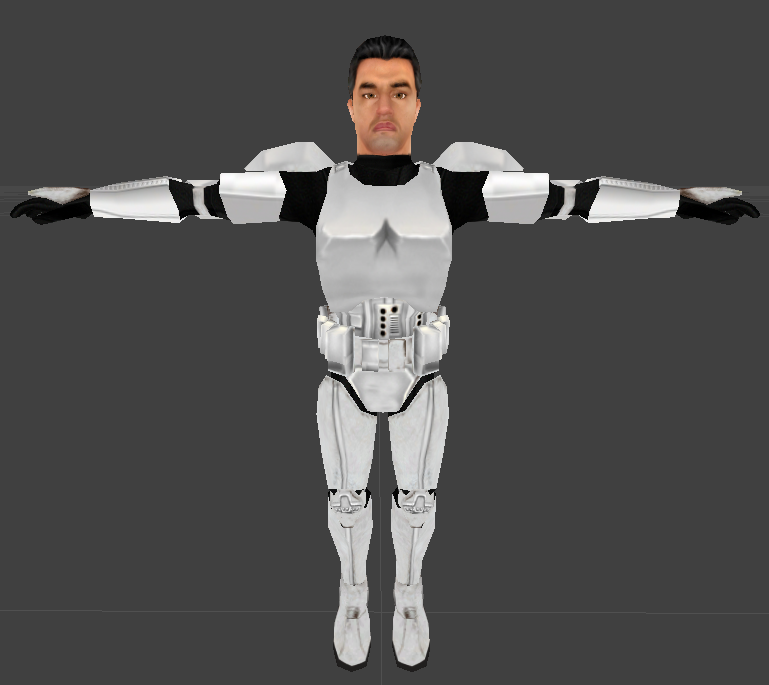 Hockey: I've been working on a Tantive IV level. Pics:

That's pretty much how we do things, surprisingly haphazard, isn't it? Actually we've picked up on a more organized pace lately with me badgering Hockey to hurry up and upload skins so I can post 'em in the update and him telling me that he's away from his comp, and thus cannot take screenshots. And yes, this will make an appearance in-game. Easter Egg? Bonus Level? Multiplayer Armor? Bonus Feature? Stay tuned, you'll find soon. Ok, I give in. DLC. 'Nuff said. ^_^ Oh, and I just recieved news from hockey, the new updated briefing is getting close to being done. I'm holding off on a main update untill that and Bralor's new Kashyyyk Trooper skin is done.