This week's update features the final version of the train level and the first peak at the sewer level!

It's that time of the week again :) We've been hard at work for the past seven nights, and we're hoping it will show ^_^

First things first, we completed the train scene. Here it is in all its glory: encoded in gfy to avoid a 5+ mb monster

Cyangmou also started working on the sewer level, which will be the next level featured in the trailer.

Lying below the massive tower, the sewer offers the perfect entry point for those who wish to avoid the heavily guarded main doors. The journey is not without its dangers however, as decades of accumulated radioactive waste have produced some frightening mutations within the local fauna... 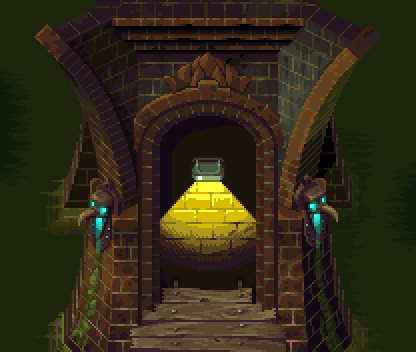 Massive pillars support the hundreds of floors above. 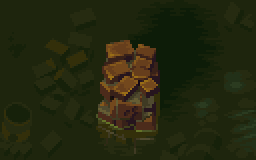 Parts of the sewer are submerged in waste. Hope you brought boots!

And finally on the code side, I revamped the "entity-to-entity" collision system.

When I started working on the game - I'm talking before Cyangmou jumped in with his amazing art - the view was going to be strictly top-down, so I originally wrote the entity-to-entity collision system to rely on axis aligned bounding boxes.

However as the game evolved towards a mix of top-down and isometric view, it quickly became apparent that this would not be enough to properly handle "tilted" objects. While we could get away with it for smaller objects, there was really no way to get around it with bigger objects (see gif below).

Therefore I refactored the collision system to use a similar approach as the entity-to-tilemap system, which relies on pixel-perfect collision masks.

The result is pixel-perfect collisions even with bigger objects such as this container:

That's it for this week! Although if you want to take a better peak at the sewer level, you can always sign up to the mailing list over at Eepurl.com ;)