This is the update for 0.2.10. The update talks about GitHub, the open BETA and the new features.

The update is a little later then planed, this was because I was changing Internet and it went down for a while. Despite all that, update 0.2.10 is here. We are planning on a BETA release to be available when all of the USA is done (There are still factions to add, provinces to edit and bugs to fix). The mod also has a GitHub, so you can contribute through that (More on this later in the update). 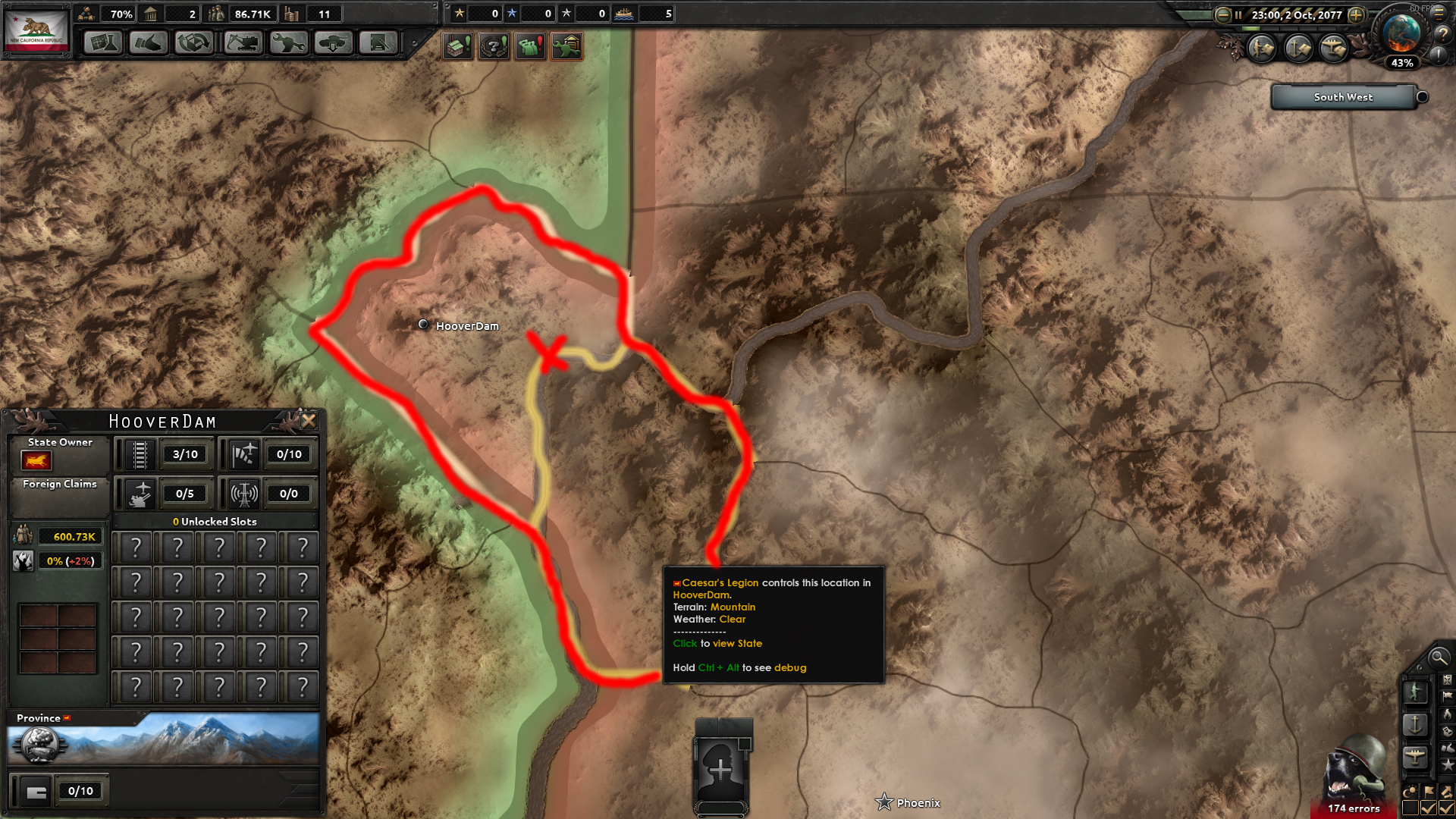 This is the new state, Hoover Dam. When the game starts, it is controlled by Caesars Legion however one of the trees in the NCR National focus allows that to change (More info later in update). The location of the dam is currently incorrect, this is something I will fix when going through the bugs and isn't a high priority. A red cross on the image shows a planned location for the victory point. 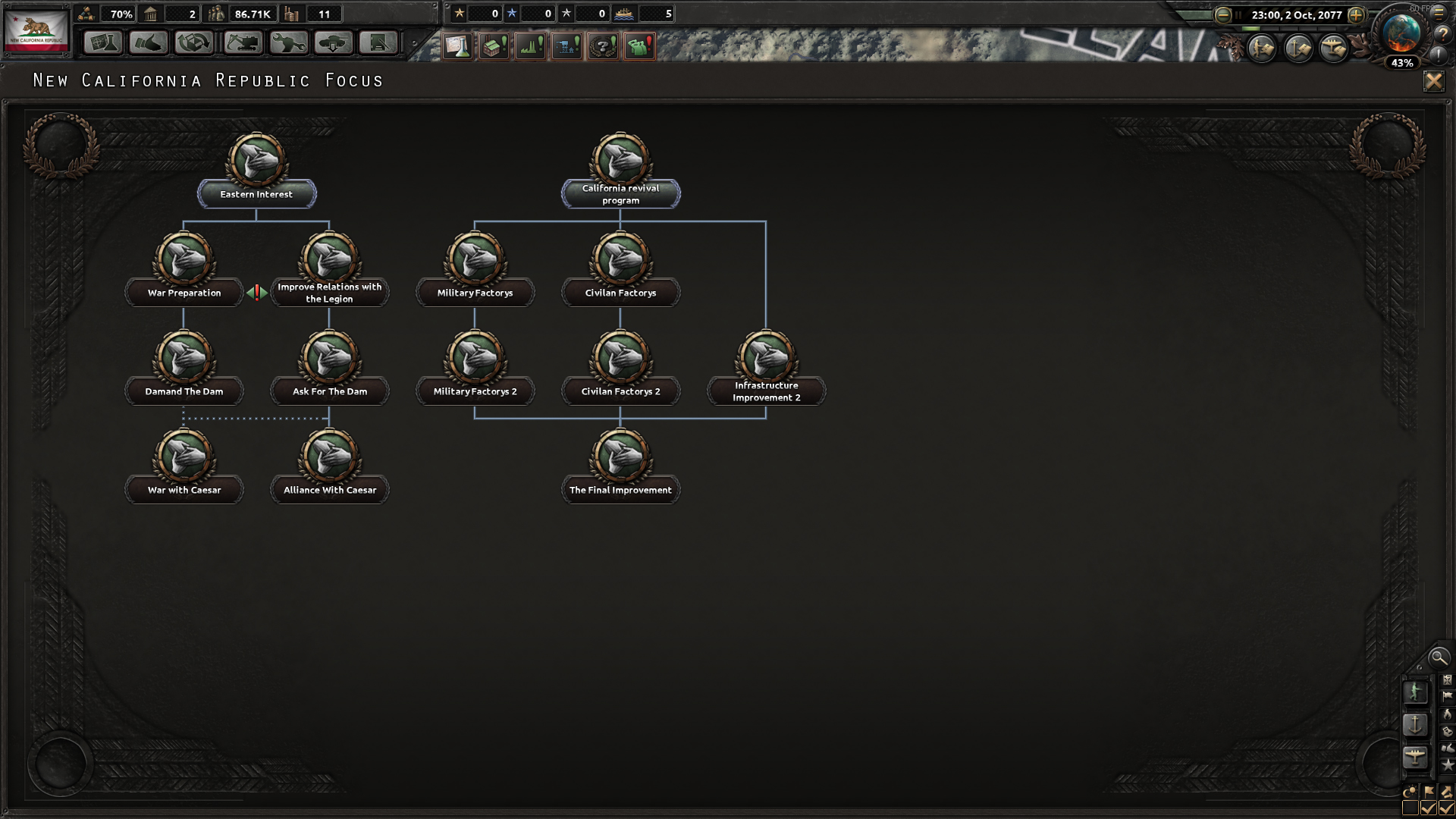 This is the National Focus tree for the NCR. The images for each focus needs to be updated, but that isn't a high priority at the moment. There are only two trees to go down at the moment:

Californian Revival Program:
This tree is the usual, add more military and civilian factories along with infrastructure. All the focuses work and combine at the end for a large boost.

Eastern Interest: This is one of the many Fallout story related trees. These trees are what will mainly make a faction unique. The tree gives you two options, diplomatically communicative with Caesars Legion and ask for the dam, or prepare for a war with them. The peaceful option is less likely to get you the dam, however it can result in an alliance with Caesars Legion called "The Hoover Alliance". The not peaceful route will add land forts to the provinces that border Caesars Legion. That then leads to demanding the dam, wich will create and event for Caesars Legion wich will give them the choice between handing it over and refusing. If the Legion refuses or gives you the dam, you can declare war. On the peacfull route, if you ask for the dam and they refuse then you can begin the declare war national focus or make the alliance.

Demand / Ask for the Hoover Dam 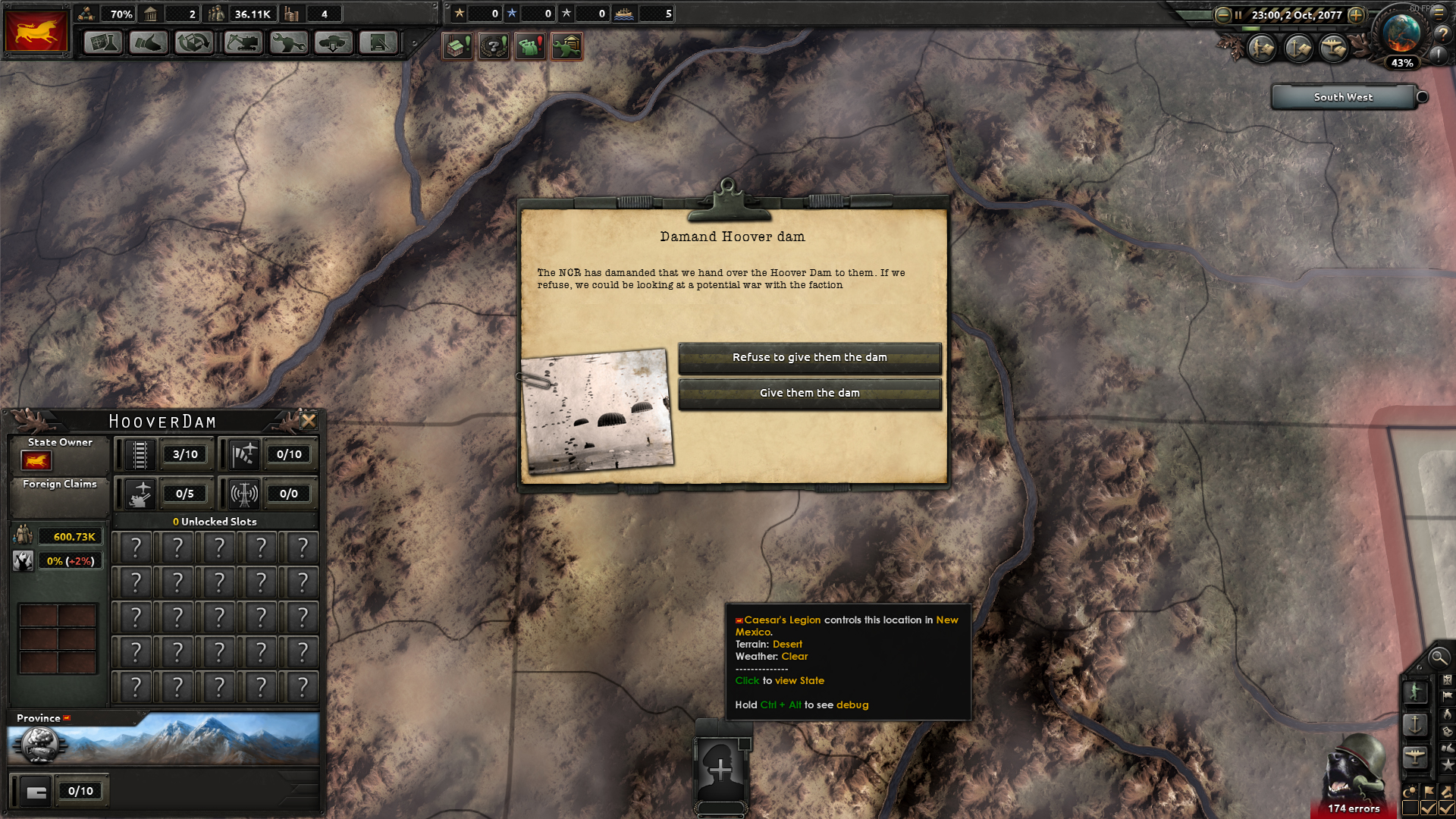 This is the event that Caesars legion get if the NCR asks for the dam. There is only a small chance that the AI will give them the Dam, no matter their opinion of the NCR. The image is a (Like most things) a place holder, as thing like GFX's will be worked last (They will be done for the BETA). 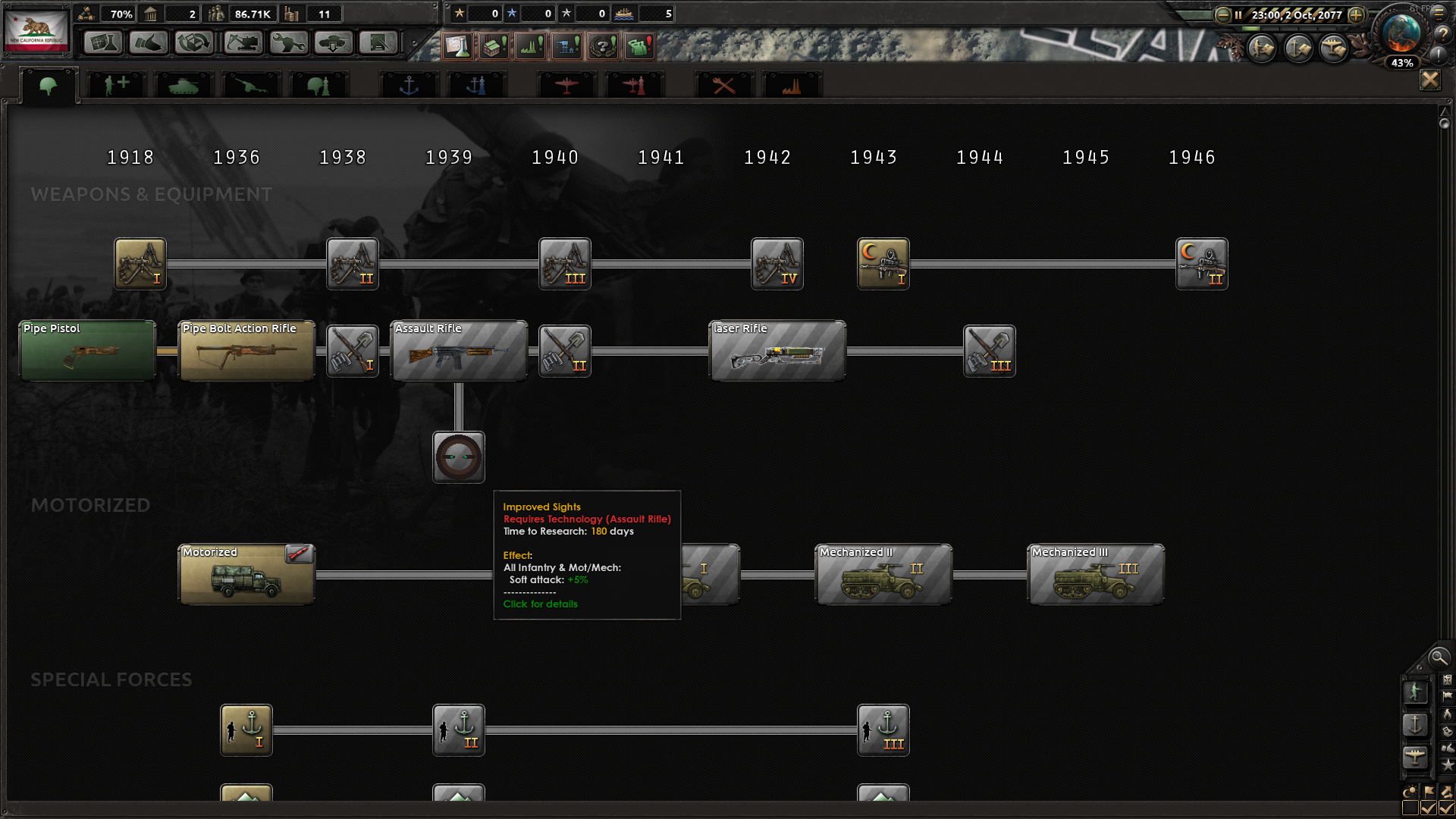 This image just shows a new addition to the tech tree, improved sights. The icon for the tech is something I quickly made in photoshop, and the tech itself just improves infantry soft attack by 5%. The tech will not require the Assault rifle, and will have its of branch on the tree.

I made an repository on GitHub for the mod. Anybody can make a contribution, just check out the mods trello board for what needs doing and feel free to do it. This mod is starting to take a long time to develop, and outside help would be great. If you are a GFX person, you are sadly not needed at the moment. If you make a contribution and it ticks something on the trello board, it will be added to the mod. You can also do bug fixes for the mod if you wish, just add the change and say what you fixed. Do also note that you will not be added to the Kgboi group if you make a submission (Unless you submit alot of work, then I will contact you about joining). With that I would also like to ask people to stop asking to join the group, I did have a system in mind however I realized it wasn't going to work.#

If you don't know how to use GitHub then look online, there are lots of guides.

The mod will be going into open BETA soon! Once all the GFX are done, all the remaining factions are added, the provinces and states are edited, the tech tree is complete and the bugs are ironed out, the mod will be available. The mod is still along way from complete, as the main goal is to have every country in the game be given its own unique faction in the style of fallout. To make the Beta come sooner, contribute to the mod with GitHub, I will be checking it for contributions daily.

That is all for this update, I don't know when the next will be since I have failed at keeping to the schedule but it will be soon. The mod has come along way and today makes it only 2 weeks in development. Thank you to all those who have watched the mod and commented on it, it really motivates me to work on the mod.

A note to people who wanted to help on the mod:
I have closed down the GitHub repository. I should have realised when I put it online that I was shooting my self in the foot. What I did was put an incomplete and unplayable version of the mod online, and this isn't how I want it's first release to go. I practically leaked my own mod. The reason why I haven't released my mod is because it's not fun to play in its current stage. It's unbalanced and is lacking in content, which is what is being worked on for the full release. When the first public version is available, I will reopen the repository for community input. Until then, the only help I can accept on the mod without givng it away is GFX work and lore people. I do feel rather stupid for this rookie error, but somehow nobody caught on and downloaded the mod (or maby they did, saw how unplayable it was and gave up on my project).

Despite how unplayable it is at the moment, it's is very close to the public release. I will try and release a few days after the next update (When that will be au do not know). Until then, thank you for taking the time out of your day to read about a guys silly mistakes.

yeah you should feel bad about that >:(
XD not that I know anything about it but, isn't motorized unit should be brahmin like and power armor as special forces?

I like your idea with Brahmin being motorized infantry, but power armor will replace tanks since there are non in Fallout (beside rusty pre-war tanks).