We have published a lot of tech talks about our game, Untold Universe, and some screenshots, but as we are now close to the end of our proof of concept, we would like to explain more explicitly the entire idea of the concept, from gameplay to main features.

Six months ago, we started to develop Untold Universe, and already shared some screenshots and a video showing technical progress on the game.

But now, as we almost have a working technical proof of concept, we feel the need to answer an important question: what is Untold Universe apart from the technical footages?

As we are now starting to work on the actual gameplay, making our proof of concept a real game, we would like to present the project to you. Indeed, since the begining, we have been very vague about it. Some saw the video and thought: what is this? Minecraft? Others found it cool in screenshots.

But ahead of the tech demo and the engine is an idea born from our passion for gaming and creativity. We now will expose it to you the best way we can. 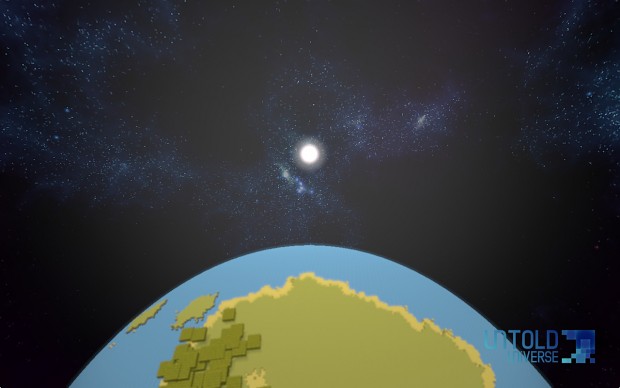 Untold Universe is the dream game of three soon to be graduated engineering students and passionate players from Paris.

As our technical skills grew, we thought about making a project together that would be something we would love to play and share with our friends. Quickly, we found an idea: a game in which you would be able to play with anyone, explore an entire universe, shape it to your will from ground to space and have a real role to play.

The idea seemed too big in the first place. How could you let the player build, design, destroy anything in a virtually infinite universe, without asking him to own a supercomputer? Well a game achieved this before, and this game is Minecraft. Let’s say it: we think Minecraft gives the player the best way to do what he wants with his environment, with the simplicity of cubes. So we don't really want to be different in that way. We won't pretend to reinvent Minecraft or something, what we want to do is to take the basic idea of a game that defined a whole new genre, and make a massive, multiplayer, persistent game with a complete and interesting gameplay.

So why would this be great, in our opinion? Well, cube based games are a lot about creativity, and what our game would bring on top of that is:

Now that we detailed the idea, let’s dig a bit deeper in the gameplay mechanics. Here are some of the most important features of the game in detail:

We hope that this will help you to imagine better what we are trying to achieve!

Creating a proof of concept in which you can go from ground to space, switch planet, play with friends, design spaceships and fire a gun will soon be achieved. It took us roughly six months to do that, and we expect to make it a game in 7-8 months from now for a private Beta with limited features. Our final goal is to have most of the features for the public Beta release, that will take place in about a year.

Please, do not hesitate to share your thoughts and opinions with us, we would really like to know how much this concept seems cool or absurd to you!

I really love this game. And I really hope there are no griefers at all.

Great ideas. I was thinking "hm... this will be hard to balance", until I read the last point "Protected planets". I love that idea... having to go to dangerous places for the most valuable resources... nice! Tracking!

How are the massive-multiplayer concepts coming along? From what I've seen I don't doubt that you will be able to code it... but as indies, it's always very difficult to test something like this.
I'd love to read a post about how you plan to support so many players (zones? or limited amount of players per universe?)
It might be easier to make the server like minecraft's server - allow up to 256 (or so) players per server and let people host their own servers... this might scale better than one massive server that everyone plays on...