This is the latest version of Unending Galaxy focusing on diplomacy and warfare. It's also our biggest update to date with many changes and improvements across the board.

Given the sheer size of this release, not all changes will be explained here. I will however explain those I consider the most important. For a full changelog, refer to this post. The official wiki will also be updated soon to reflect the changes. 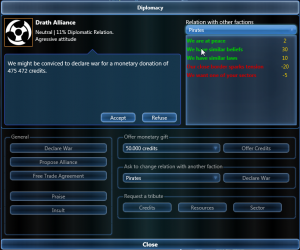 As explained in our previous articles, the diplomacy is the main new feature of the game. It is now possible to ally and bribe other factions. It’s also possible to request them to make peace or declare war on each other. More to the point, to end a war that you are loosing, you may be required to give a system and/or money. AI Faction may also sue for peace and give you stuff.

Also, once you’re at war you are committed for roughly 20 minutes. When a war ends, you won’t be able to declare war against the same target for more or less 15 minutes as per the cease fire agreement.

If two or more factions are allied, they will all declare war if one of them is attacked by a third party. Alliances last 20 minutes minimum, and it’s not possible to declare war against a former ally for an additional 15 minutes once the alliance is ended.

There’s a lot more to be said about the various changes to the diplomacy but I will use the wiki documentation center for that. It’s gonna take a few days to put everything there, though. 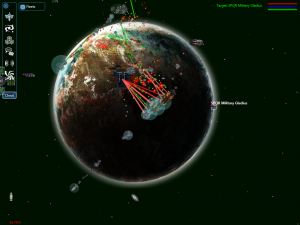 Faction are much more clever (can’t really say they are good yet, though) at handling their military fleets. They know when an enemy is too strong for them to handle and will stop to send fleets that are too small to do any damage. They are able to handle multiple wars at the same time handling multiple invasion fleets simultaneously. That was a complicated, but much needed improvement especially with the new alliance system.

I also improved how factions will defend their territory. It’s not yet on par with what I want, mainly because ships move individually instead of using fleets. But it’s still leaps and bounds better than in 0.6. Also, faction will send their capital ships for repairs as needed.

Building wise, they also are better at determining what station they need and where. I also reshuffled priority on what to build first. It’s not perfect, but it’s pretty good. 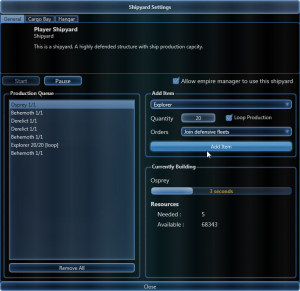 As an empire there’s quite a few new concepts to understand. First and foremost, factions won’t insta-build military ships for free anymore, time and ships parts are required. Access to one of your shipyards to look at the menu, it’s a bit bare-bone at the moment, but it will be improved. Military production is also capped by another value, called Manpower which is granted by the planets a faction has under its control, different planets (and colonies) bring different amount of manpower. As a result, solar systems become much more important that any other sectors in this release. I’ll get back to that further down.

As a ship, there’s also quite a few new features and changes to take into account. The main one is the new short range jumpdrive allowing most ships to jump to any location in a 4 to 5 sectors radius. This is done using the same button as the one used to travel through warpgates. It however takes time both for the jump itself (10 seconds) and then for the engine to recharge (1 minute or so).

Annoyed by the fact you can’t repair your damaged ship anywhere ? No more ! Repair bays are available at any military base, shipyard and pirate base.

I also added space monsters called The Swarm. They roam the universe and eat asteroids. Be warned, they are extremely tough. More information about them are available in this devlog. 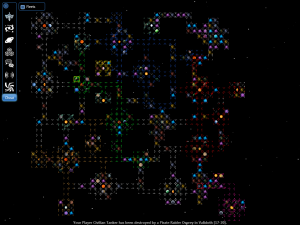 Planets and suns aren’t put at random anymore, maps are much more coherent, and as a result I moved the capital of each solar system from its sun to its best planet. Talking about planets, they are now the most important asset of any empire as depending on the type of planet (temperate, rocky, gas giant, icy, ….) and colony type (industrial, military, habitation…) they will give various bonuses to the faction controlling the related sector. It’s a bit complicated, but I added a nice menu that sums up what a given sector can provide. Here again, details will be available in the wiki when I can find some spare time.

Asteroids got some love (not enough), as I added a new formation (cluster) and made the amount of asteroids proportional to the “asteroid density” map setting. Oh, sectors are 20% bigger, and get named after their planet if any.

There’s also 2 new maps (huge and tiny), and the standard one got improved. 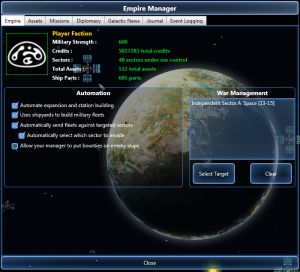 Loads of improvements here too. The Empire Manager got the biggest part of it, as I added and completed the “empire automation” checkboxes. I also added support for multiple war targets, added more statistics, and so on.

More importantly the menus are incorporated in the main game window, (I was using separate windows before) leading to somewhat better performance, but it also fix an annoying issue where the menu wouldn’t be displayed when someone is recording the game with a lot of commonly used screen capture software.

I added a quite useful “Center camera on target” keyboard shortcut (F3 by default). Highlighted your selected ships on the galactic map. Made most fonts bigger. Added icons there and there. And loads of other changes.


With the cool editor I made (and that you will totally get if you donate), I also rebalanced quite a lot of things, added new ships and stations and so on. Regarding the weaponry, in general, shields are much tougher but recharge more slowly, lasers are less deadly, missiles do much more damage but fire a bit less often. I also added some faction specific weapons. Also, 12 or so new ships have been added, most of them have been assigned to the new SPQR faction. But i also rebalanced all Core ships and most capital (carriers and battleships) of other races.

I also added new illegal, pirate owned, factories (weapon factory, drug lab, slave pits) and rebalanced the others so they can make a profit, which wasn’t always the case in previous versions.


Performances are heavily improved across the board. I fixed about 40 bugs ranging from small typos to critical failures. The game looks stable as I can run it in automated mode all day long without issue. That said and even if I tried to be extremely careful with my code, given the sheer amount of changes and new features, there’s probably a lot that I have missed nonetheless.

Also, note that the new very large map “Galaxia” can become a slug fest with anything below a recent quad core CPU after a few hours of gaming. It will be improved upon, but not until we reach a more advanced stage where I can optimize the code properly.


There’s a lot of things that are missing in this summary, some of them on purpose as they are meant to be a surprise (at least for those who didn’t read the spoilers in the previous devlogs), and others because I may as well write a whole book to describe everything new. As said earlier, the full changelog is already available, and the wiki will be progressively updated to reflect the changes.

Anyway, I hope you will like this release. This is hopefully (beside last minute bug fixes) the last before the beta version that should feature much more actual content.

i freaking love this :)