Now that I’ve addressed all of the issues from the last internal test, Turnover can now finally move out of alpha.

Next week, keys will be distributed to KickStarter backers and other testers via Steam. This will kick off the first round of beta testing for Turnover. The plan is to have the first beta test run for a while, just to gather feedback. When that period ends, the beta will be updated regularly with features and fixes. Over time, I’ll probably bring more and more people into the testing fold as well.

It has been one hell of a journey getting to this point. I’ll admit, it has been kind of surreal. When I started working on the engine project back in 2013, I would never have guessed it would have turned into a full game at this level. I’m very fortunate to have gotten this far. Thanks for reading the blog and sticking around, and thanks for all of the support.

Now, onto some things I’ve been addressing to prepare for beta.

New minimap blips have been added. Originally, everything was drawn normally, but it looked terrible and nothing could be easily made out.

A few things to note:

I think the minimap meets its original intent now, as I found myself actually using it. Should help players out a bit. 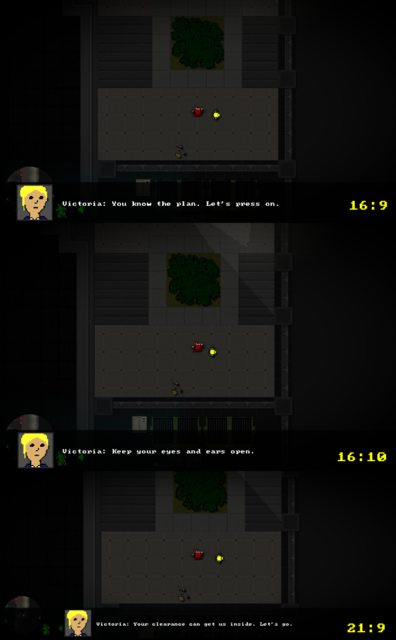 I’ve put in some work to make sure that everything looks good among various aspect ratios: 16:9, 16:10, and 21:9. It took some tweaking of HUD text and image placement, but now everything should be fairly consistent..

Here is the last progress changelog report I’m going to post. From here on out, I’ll include only official build changes instead of every little in-progress thing.