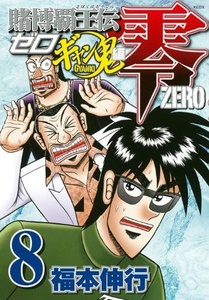 The 22nd issue of Kodansha's Weekly Shōnen Magazine will announce on Wednesday that Nobuyuki Fukumoto's gambling manga Tobaku Haōden Zero: Gyanki-Hen will end in four chapters. The final chapter will be in the magazine's 26th issue, which ships on May 29.Tobaku Haōden Zero began serialization in 2007, and Kodansha compiled and published eight volumes before the series went on a two and a half year hiatus. The seriesreturned in 2011 as Tobaku Haōden Zero: Gyanki-Hen, for which Kodansha has also published eight volumes. The latest volume (pictured at right) shipped in Japan last week. The announcement does not mention if the next four chapters are the end of the entire Tobaku Haōden Zeroseries, or just Tobaku Haōden Zero: Gyanki-Hen.The story follows a teenager named "Zero" Ukai who enters a trillion-yen (about US$10-billion) competition after saving his friends from a yakuza organization.Fukumoto is best known for his long-running Kaiji gambling manga, whichinspired two television series and two live-action films with director Tōya Satō (live-action Gokusen, Gatchaman) and main star Tatsuya Fujiwara(Death Note's Light, Battle Royale's Shuya). The website Joost streamed the first anime series in 2009. The manga has been on hiatus since February of last year, but will return on Saturday.
Post a comment
Sign in or join with: