Post news RSS This Is Not a Test Coming To iPad, Ruthlessly!

I just finished coding, testing, and submitting a universal version of the game! I also made a controversial decisions to add banner ads and life regeneration. They can be removed by upgrading to pro (which will now also come with the colour background art).

The Universal Version Is Immanent!

After a couple weeks coding I recently submitted a major update to This Is Not a Test! This will be version 3.1.0 and it will be accepted or rejected around the end of next week. Just in time for Halloween! Perfect timing — it’s kind of an evil upgrade. But before I get to the evil, let me just say that the game will finally be universal! This Is Not a Test will now run natively on your iPad, which we now think is the swankiest way to play!

Because the panel art was initially drawn for the size of an iPhone screen it didn't look quite right when just slapped on the iPad. I played around with the image size until I found a proportion I liked, then added a black and white inked background to fill in the negative space on the sides. In the end, it will look like this:

It was mostly a matter of making a second storyboard in Xcode for the iPad and adjusting as needed. However, there were some programmatic things I had to change that were a pain in the butt, like text size of a custom font (for some reason storyboard wouldn't let me select a custom font for my labels :-\ ). Here's a glimpse of how you manage the different layouts for a universal iOS app: 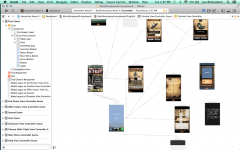 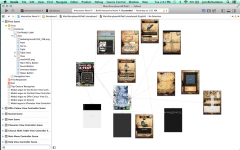 A Little Evil In the Update

As for the evil, this update will also contain ads and life regeneration! Buahaha. Yes, we have given away too much of our beloved game in the past. We’ve been revealing a bit too much skin for not enough of your hard-earned money!

Removing ads and adding life regeneration will now be a part of the premium upgrade, along with the color art unlock. This will without a doubt help me fund more games while simultaneously making thousands of people curse me :D Interesting. Indeed, this is in preparation for going permanently free.

Stay tuned for information regarding the update's approval!

Prior disclaimer: I've had your game for a while and I'm pretty sure I paid in the region of £1.49 for it, but I don't remember for sure or know how to check.

Now... There's "evil lolol ain't I a stinker", and then there's putting a large banner saying "Freebie mode" and ads on the game screen of a game that people have purchased in good faith, and severely limiting the amount they can play the game.

I was close to paying the IAP for the color art, as it looks fantastic in the demo, but what's my incentive now? It feels like at any moment you will release another restrictive update demanding another purchase for continued access to the same content. I'm all for IAP for additional content and I'm even for separate iPad apps to raise additional funds for the extra work required, but I'm not for this.

If you were a big company I would make a complaint to Apple. As you're not, I just hope you'll read this and tell me what the hell you were thinking when you released this self-sabotaging update.

Thanks for writing. You bring up a good point that I knew I’d have to address. Let me first start by saying that by making this complaint you’re someone who has supported me thus far and I completely understand your frustration. It was a very tough decision to restrict play in the game, and even harder to impede on the visual appeal of the game with *shudder* banner ads. You do deserve an explanation.

I’ve got to say that without this move, it would be almost impossible for me to sustain work on the game. To continue creating games like this I need to reach a wider audience to make the project profitable (which it isn’t). To do that I need to make the game free and get it in the hands of countless new users. While I recognize that you may feel cheated, I will still make the plea for you to upgrade, continue to help me out, and enjoy the beautiful color art in the game. In the past the game has been cheaper than a cup of coffee. I’ve added a lot to the game since you purchased it as well. While I love you as an early adopter, and I appreciate the principle, please keep in mind how cheap the game was. It’s just another cup of coffee for the upgrade, and the color version is so fantastic. I hand-picked the colourist from like 100 entries to make sure it was perfect! :) Robbing players is certainly not my intention.

If you or any other players feel that you’ve lost trust in me as a developer as I try and roll this thing over into freemium, I invite you to write to me and chat. I’d love to hear your input on story ideas and collaborate with you on this story, or the next one.

I appreciate the reply. It's clear to see that a lot of work and expense has gone into the game. The end product is best-in-class and you fully deserve to profit from it. As I say, my finger has been on the trigger of the colour artwork IAP for a while and I'm pretty sure I would've gone ahead with it had this latest update made the app Universal without hurting the core game experience.

While I understand your motivations (I work in an industry that's just a stone's throw away), the implementation is just a little offensive to anybody's way of thinking. It's not okay to put a banner with the words "freebie version" on a paid app, and it's not okay to limit gameplay so harshly. Though it's easy to misinterpret the tone of the written word, the seemingly unapologetic way you approach the situation in both the update notes and this blog may also be an aggravating factor for some.

Let's face it, if you make your app free and it rises to the top of the charts and makes that ad revenue and those conversions then all this will fade into insignificance and you can float away on your yacht into the sunset. But short of that, you really want to be capitalising and expanding on your existing user base, not alienating it.

As for alternatives, you could for example make the IAP free for existing users for a certain amount of time, and then restore the full price at the same time as you make the game free. Or you could create a "lite" version of the app that's free and has the restrictions/ads and upsell people to the full game.

I understand that you need to do whatever it takes to make the numbers stack up, but as someone who wants to see this project flourish I have to question if this is the way. Anyway, I wish you every success. By all means keep in touch.