So, in lieu of a bland update just showing off new stuff in a very clinical fashion, I thought I'd give you a virtual tour of The View of Inca, as a means of showing you how the game is coming along, with more of a flavour of showing what you'll experience when you get to explore the world yourself :)

So, hopefully, you've all been watching the wonderful 'Let's Play' series by Hyfrydle, chronically the mighty journey of Whenkheliio through Ahkranox, and his journey has been focused mainly around the town "The View of Inca", which can be found at world co-ordinates 32,24,107,83,500,600.

So, in lieu of a bland update just showing off new stuff in a very clinical fashion, I thought I'd give you a virtual tour of The View of Inca, as a means of showing you how the game is coming along, with more of a flavour of showing what you'll experience when you get to explore the world yourself :)

While the town itself is nothing too amazing, the world around it is absolutely awesome. It is definitely one of the coolest towns that the team has managed to find in the game so far.

Here we have the mighty gates to the town: 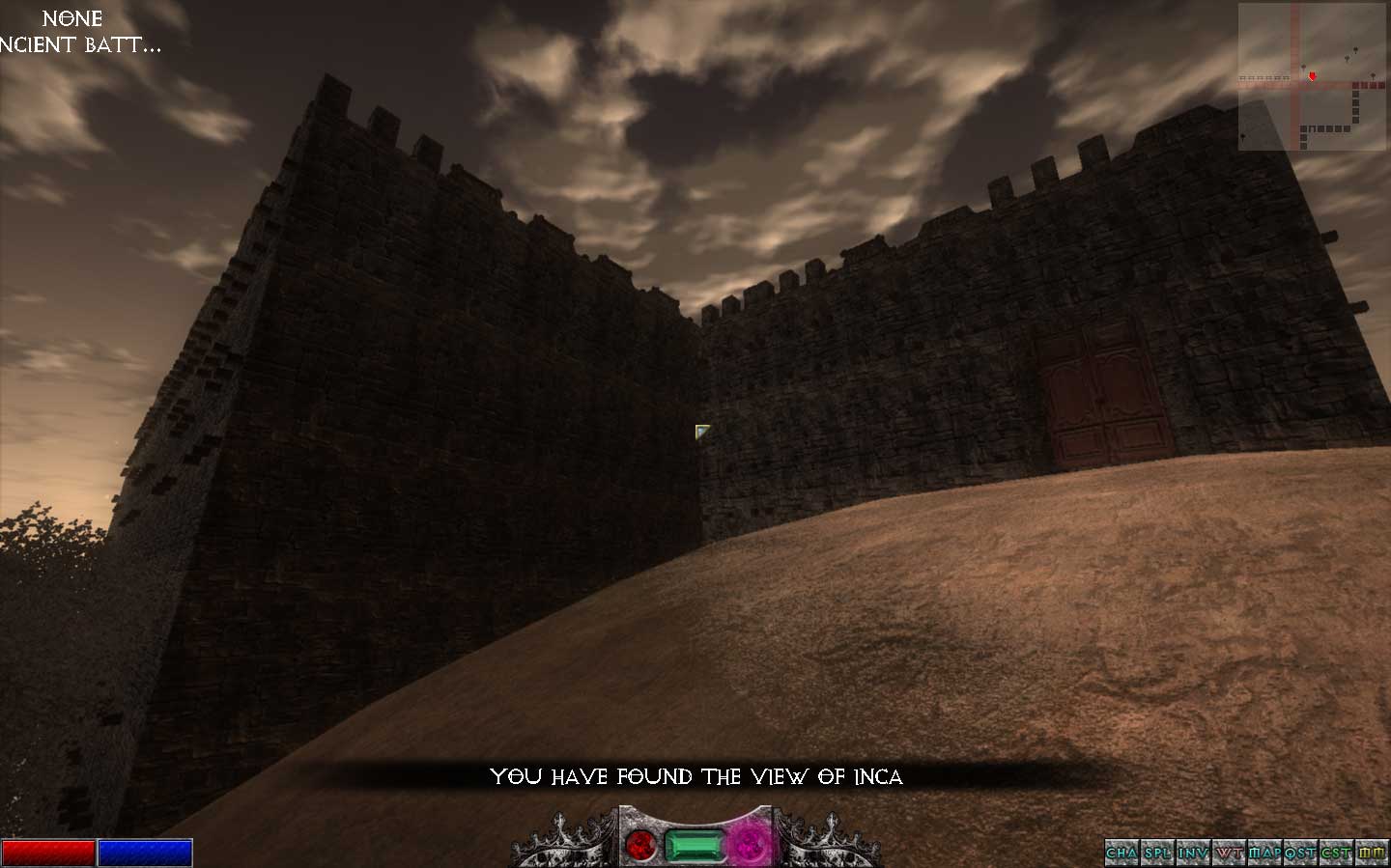 The town doors open onto a small village green (currently nothing in the green, but that will change over the next few updates) 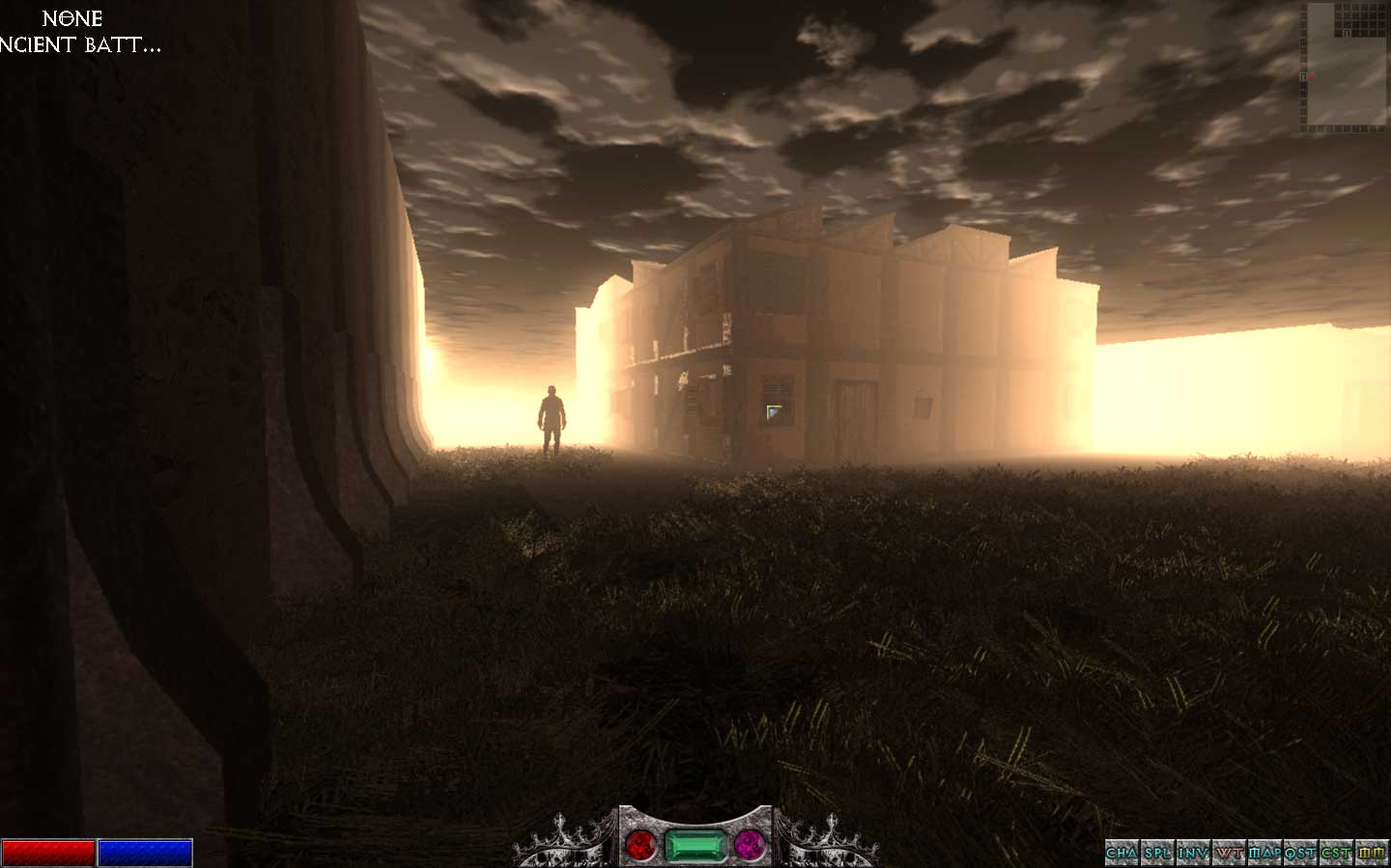 Aside from the guards, the inhabitants here are quite friendly, though fairly alert for being so close to so many evil places: 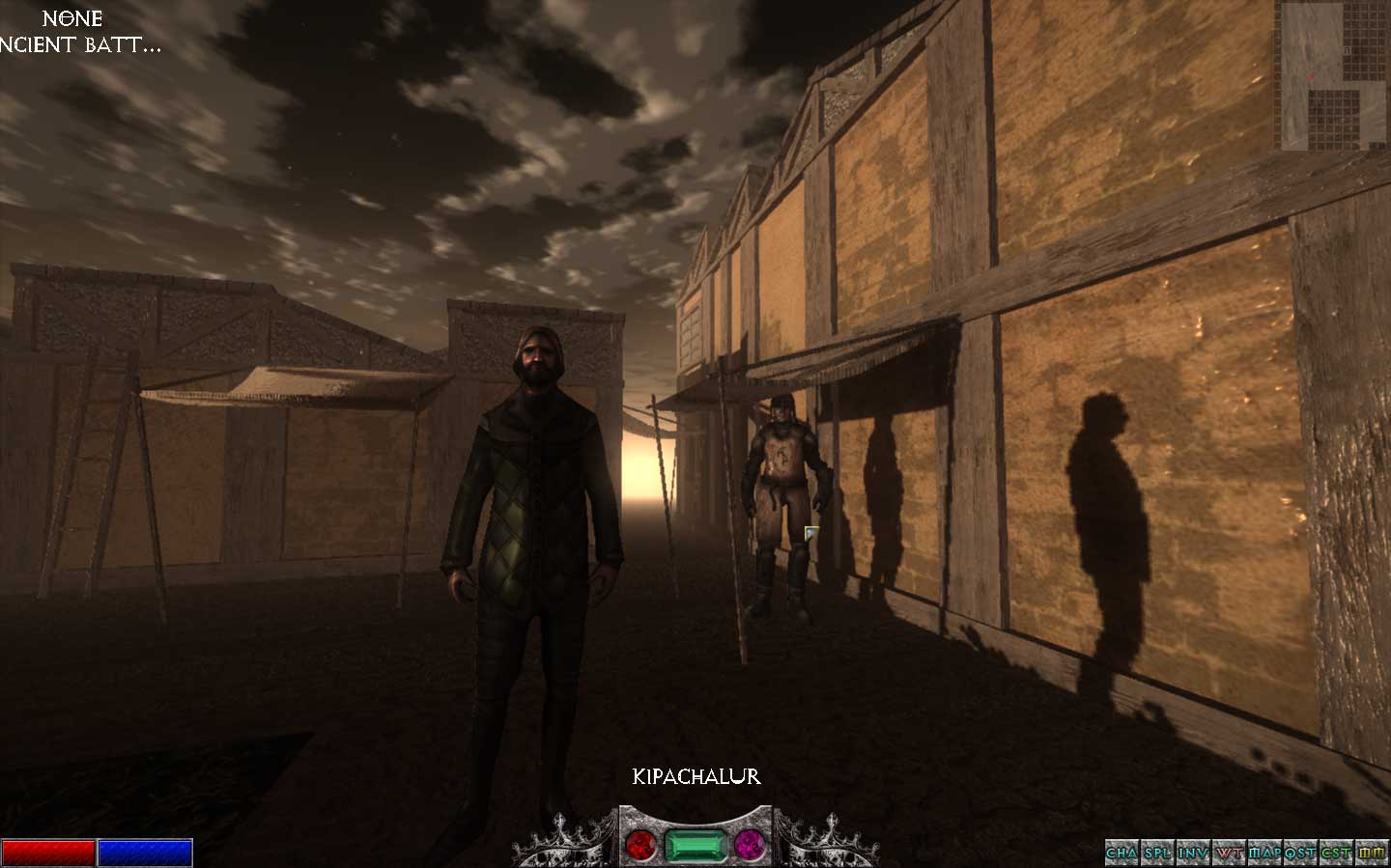 It has a couple of local facilities. Here's the general store: 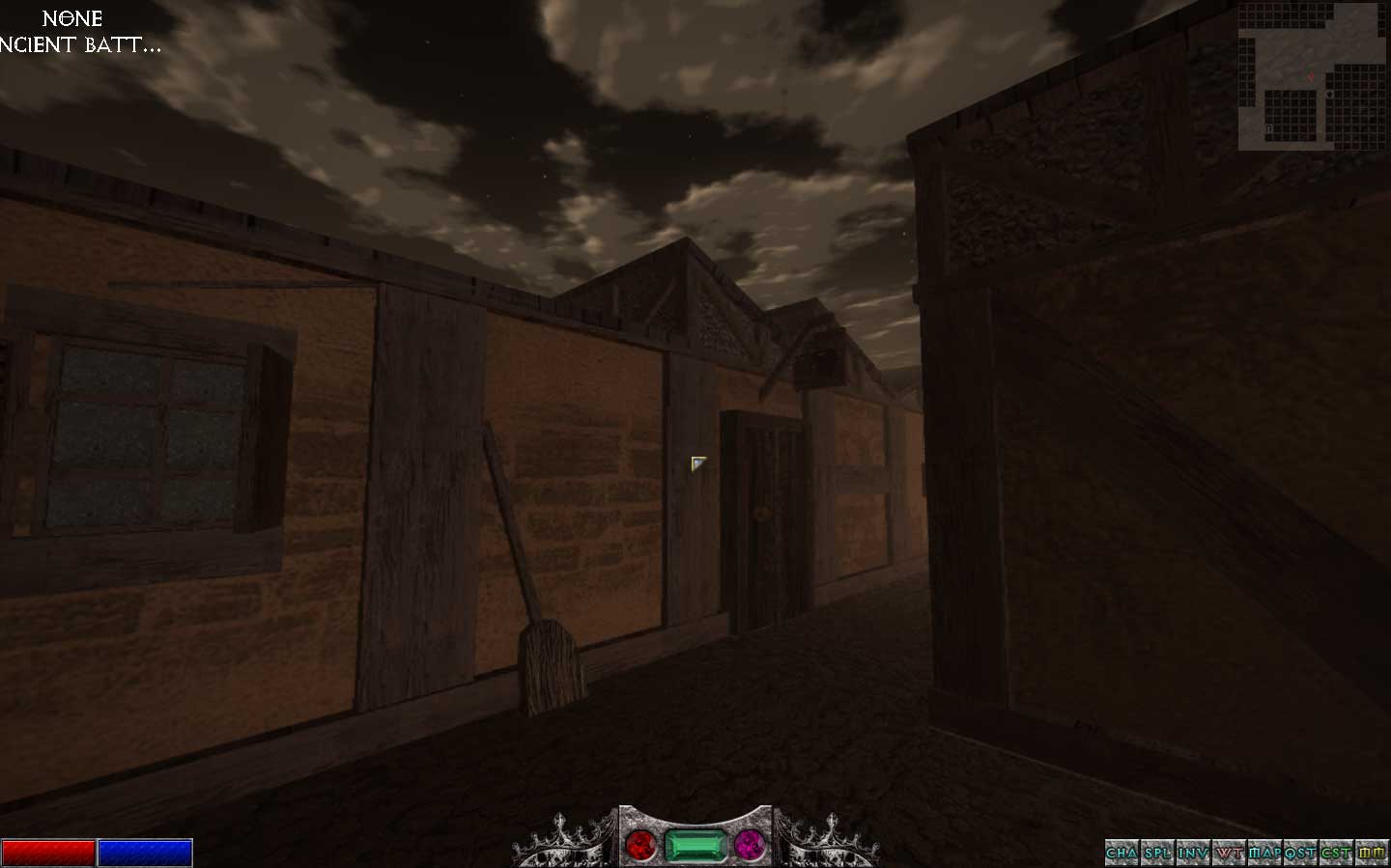 And, of course, the Tavern, called "The Chipmunk and Captain Lodge" 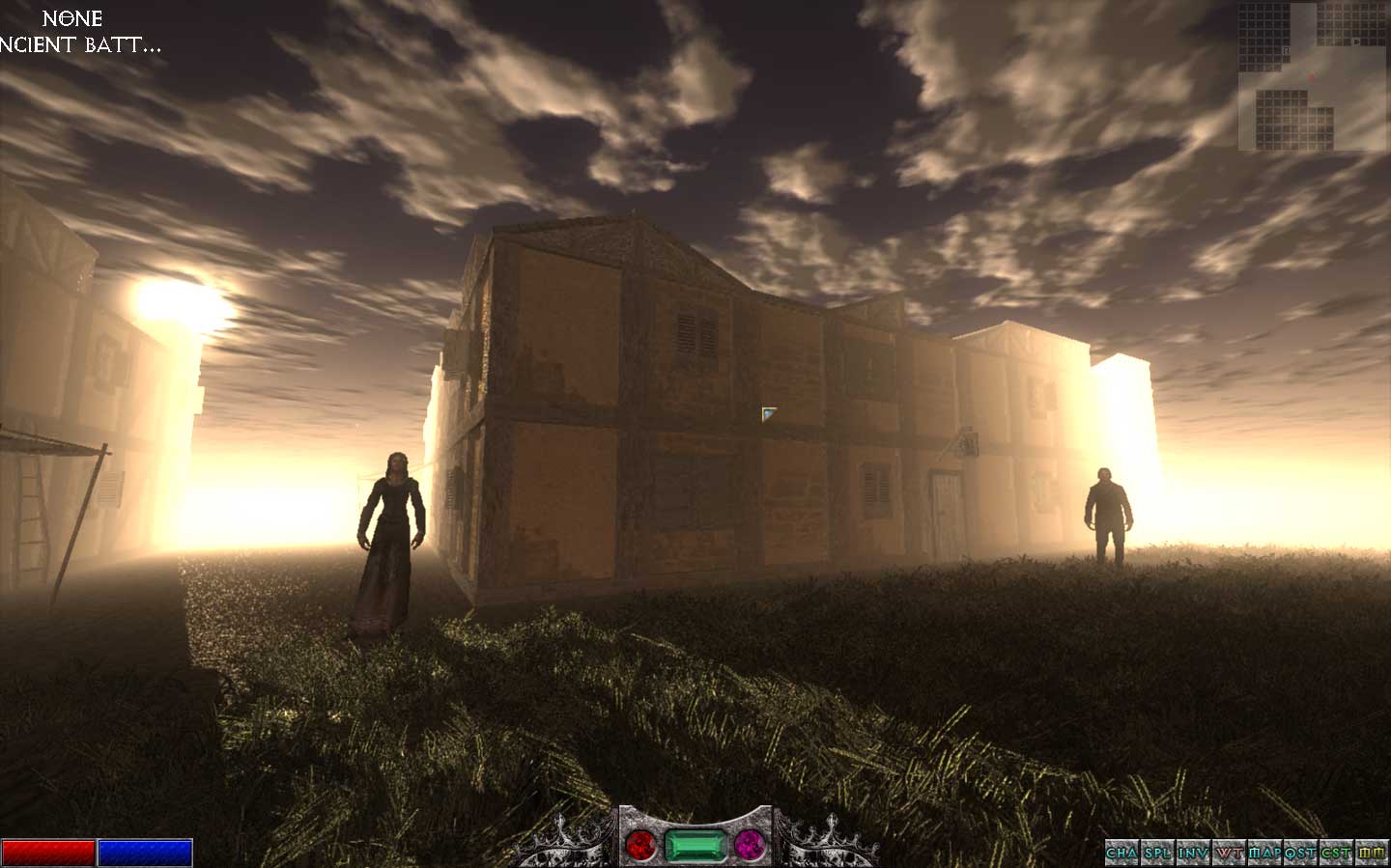 The town is surrounded by multiple, dark, evil monster breeding grounds. Being so close to such dangers, the town is built like a fortress. It rests high on a steep hill, the view from which is pretty spectacular: 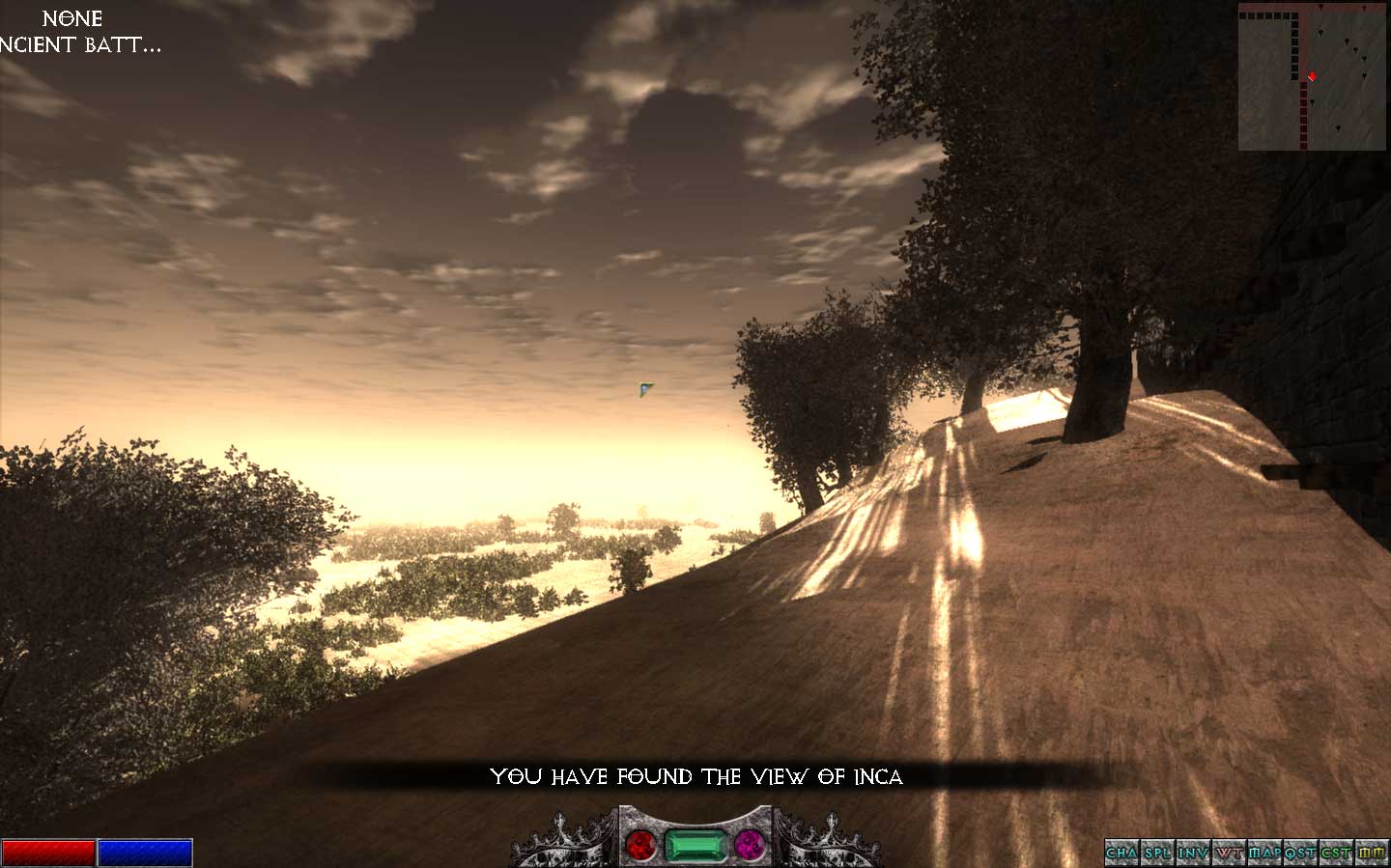 Around the corner from here there's actually a very large ruin stretching up and down the hillside. The ruin is totally abandoned though, so it's safe to explore (except at night): 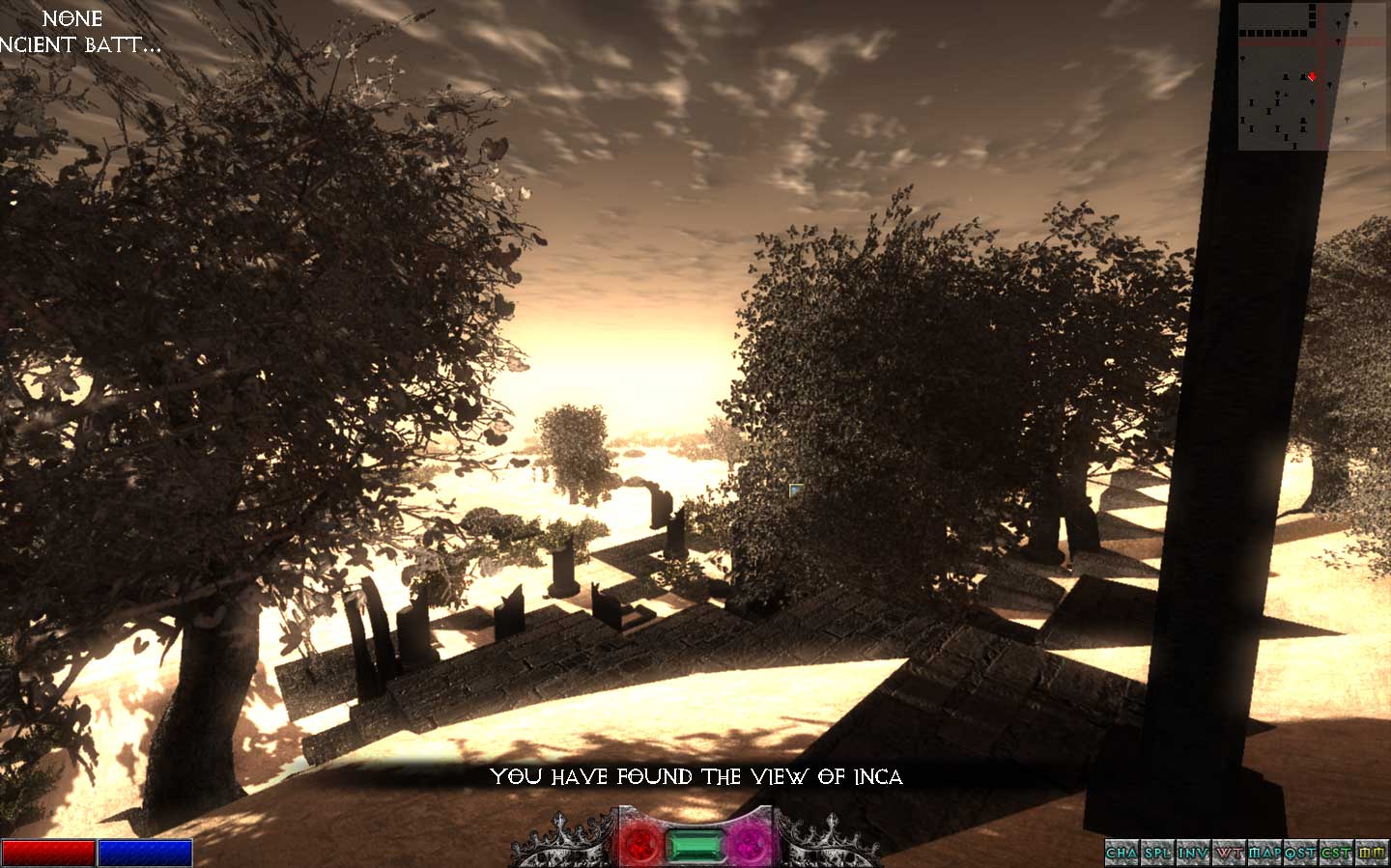 To the right of this ruin there is the first of two graveyards adjacent to the town: 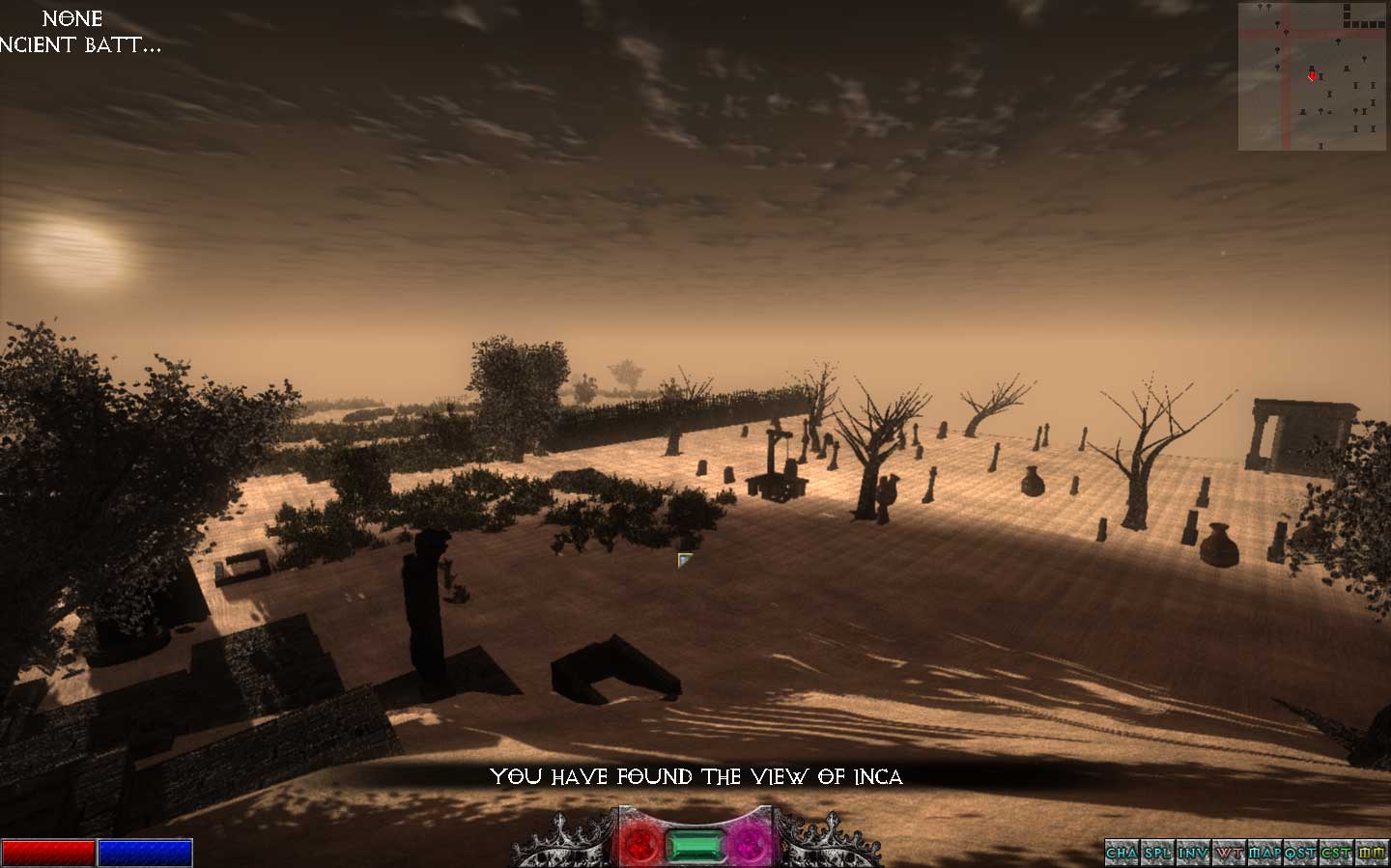 From down amongst the gravestones, looking back at the town, you can see just how formidable the structure is: 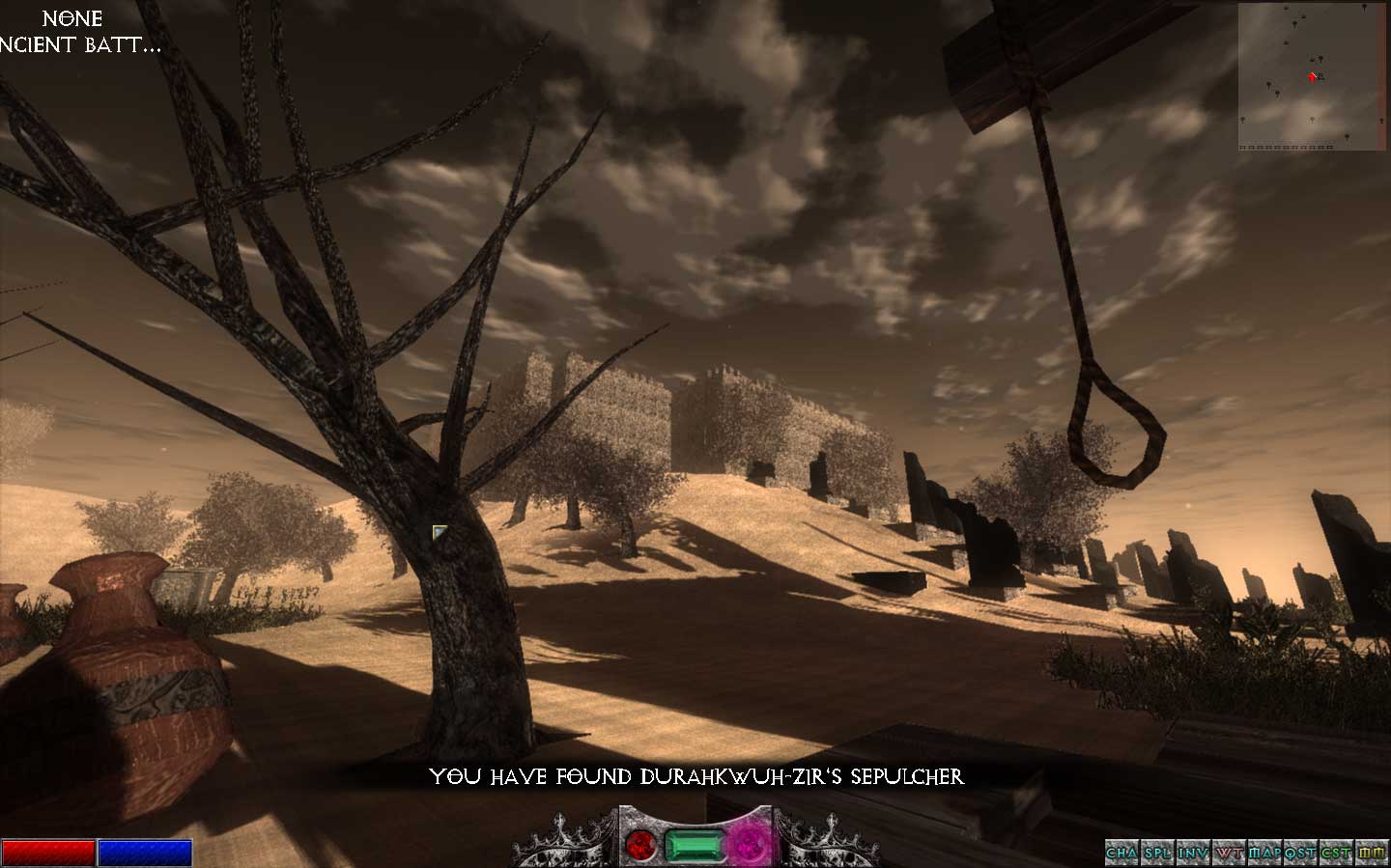 If you continue around the town past the first graveyard, you'll find a dungeon, The Oubliette of Zhurhu, which lies in the shadow of the city. 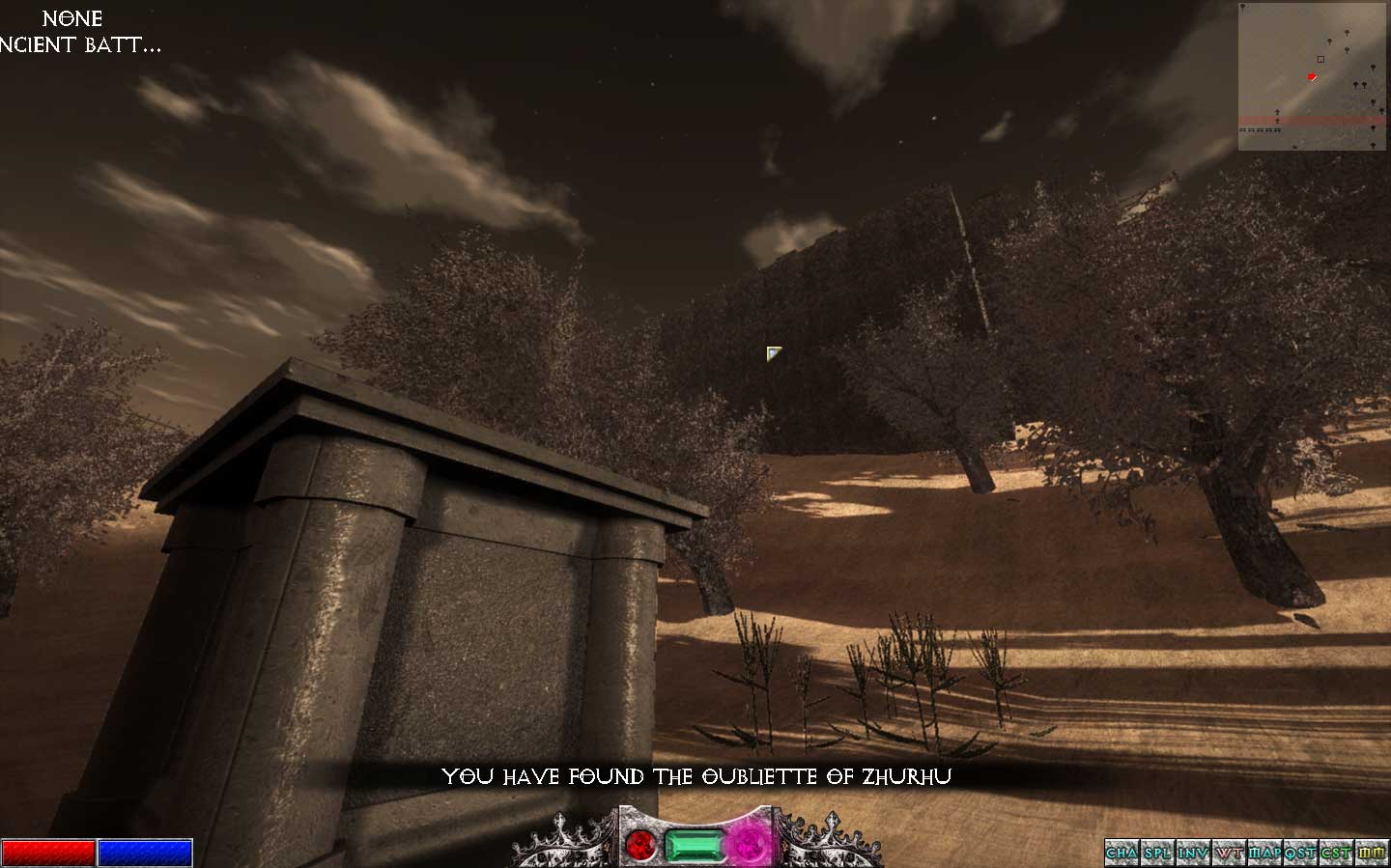 On the opposite hill, slightly further from the town, there is another graveyard, with an Oubliette of its own. This one belonging to Xhe-Wabe. Who, exactly, he was has been lost to time, but dark, evil things have moved into his resting place.
Still... The hilltop provides yet another great - if not distant - view of the city walls: 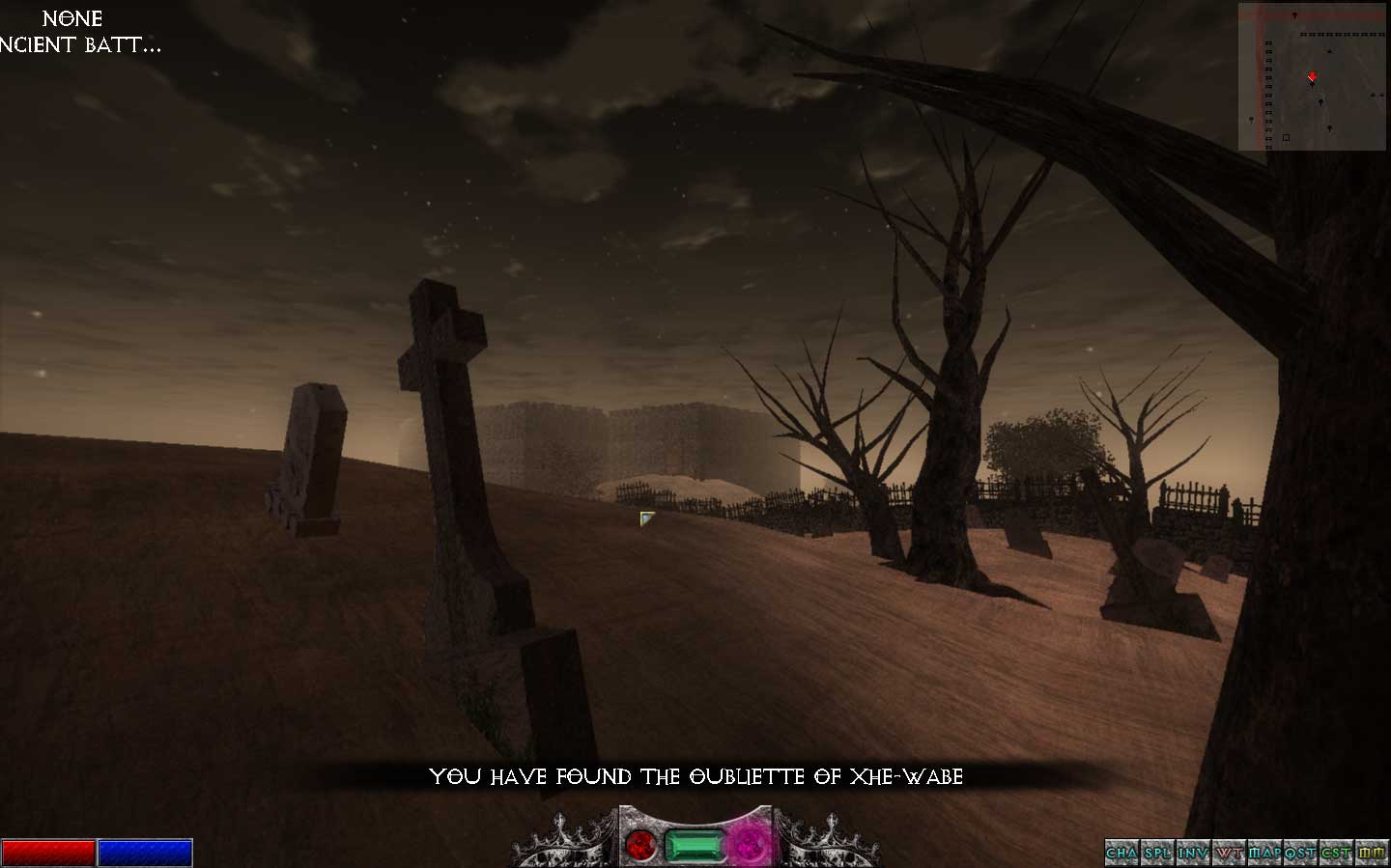 And, if you head for a short stroll to the South-East of town, you'll find a stone circle, or henge, that is as old as the hills on which the town was built :D 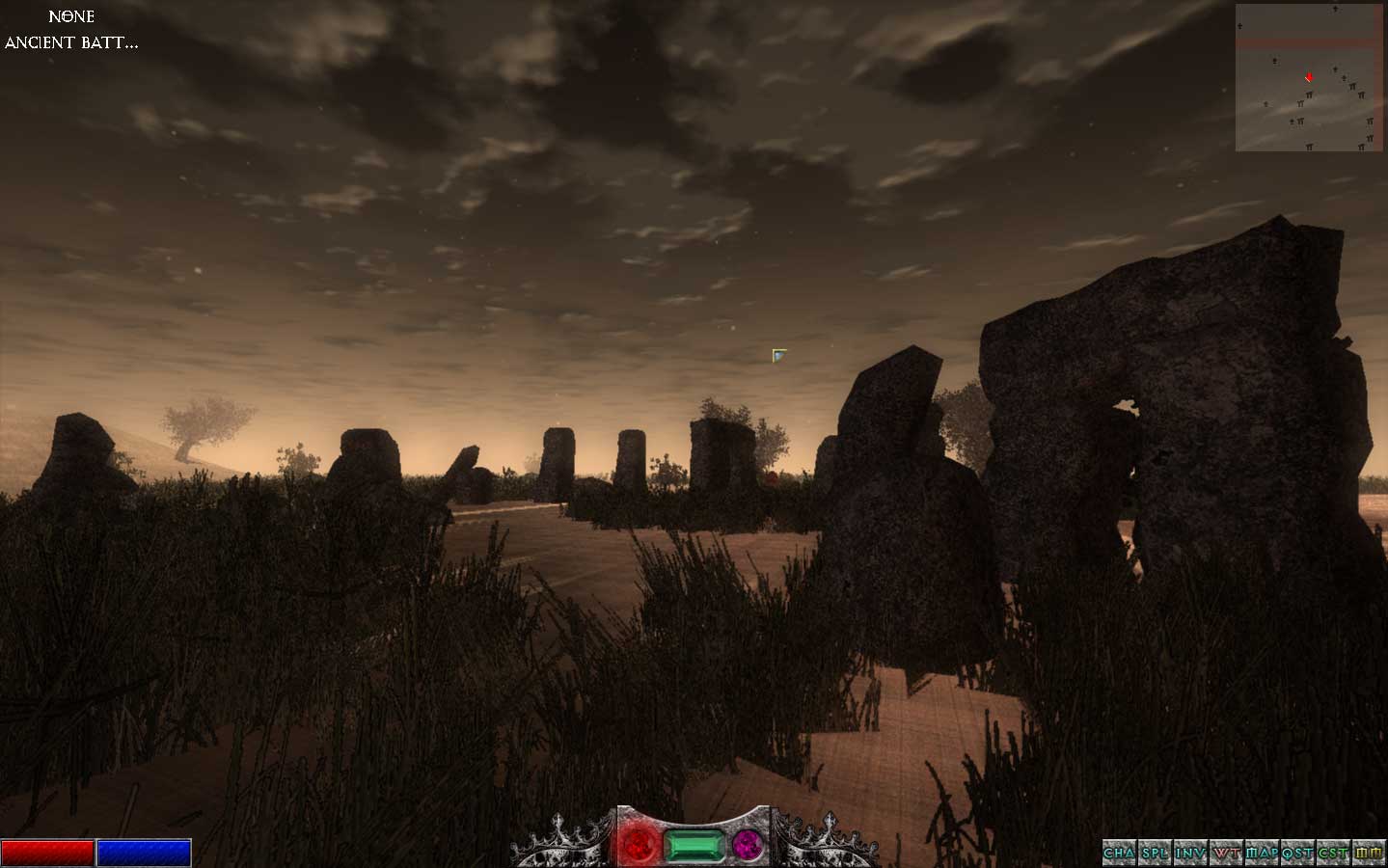 And that concludes our little tour of The View of Inca! With luck, Hyfrydle will be able to have another Let's Play video for you all soon where he explores even further!

Very nice variety of models and assets!
Glad to see the productivity!
I'm sure people are going to complain about the bloom and brightness, but I know it doesn't represent the final game. Keep up the hard work! I can't wait to actually play Malevolence