I don't update the ModDB as often as my own website so this is a summary of everything since the last post in February. I also need help with voice acting and a lag test, read post for details. 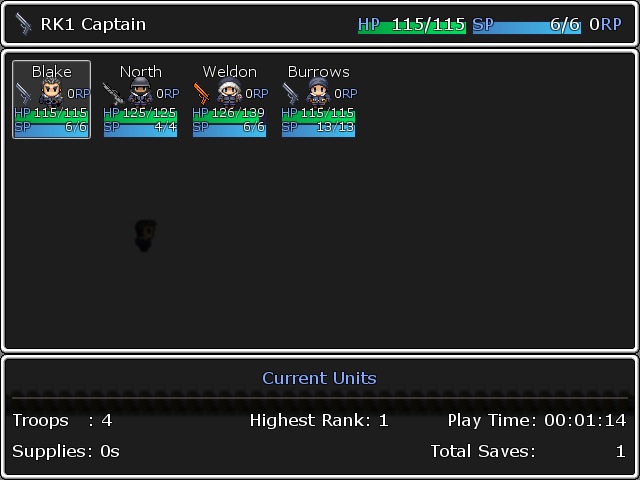 Good news everyone; I am making good progress with the v2 of the game and intend to release it this September. I usually update my website more regularly with posts so I'm using this post as an opportunity to summarize work completed so far and work planned.

Work Completed and Changes to the Game (Since last ModDB Post)

(There are over 100+ small changes/updates, so here is a brief list)
Game is harder, units have lower HP and SP values and infection rate is slightly increased. This should bring more of a focus on survival.
Starvation and Cold Exposure/Fever have been added to the game, these are ailments that will punish party members.
Minor bug fixing and spelling corrections
Updated sprite graphics and implemented new in-game menu (based on Galvs Party Manager, See screenshot above)
Additional Artwork for the game and new enemies
AGI is more important in game now, Thing units will attack first most often now as opposed to the player spamming them with bullets before they get the drop on you
SP Regen and Healing abilities/items are more valuable to you
Added additional sidequests to story mode (some are newgame+ exclusive) this will involve more random NPC's at your Field Base
Added extra skinsets as a marathon game reward, Lara Croft & HUNK are among these
Thing enemies are now in bigger groups, the individual ones are instead made stronger with additional attacks and resistances so bosses cant be stunned all the time now
Flares now actually run out after 12 minutes
HIT, EVA & CRI now appear in the Equip Menu to make it a bit easier to understand their importance
Tutorial has been fully remastered and uses the in game field guide to teach you about the game as I realized some players didn't fully understand mechanics and my original tutorial was somewhat lazy
The Ship Story has been Mapped and is now referred to as "Prequel Mode"
"Walkthrough" has been added to main menu (replaces website link) but is incomplete, will probably update after release as I can do it externally through my website instead of via the game. I'm also writing an unlockables guide so people can learn how to get in game stuff as its not clear.
Have rewrote some of the intro texts to include 2 ufos buried in the ice, one found in 1972 which will account for a lot of gen incs bases and stuff having time to be built and the other found in 1982 by the norwegians (which is found by Gen Inc in 1983) A tip off from an unknown inside source sparks the Government to send Blake out on allegations of corruption, civilians in danger and unethical military-gen inc practices.
New enemies "The Pilot", unused creature from the 2011 prequel movie and "Spitter" added to the game. The Spitter is a small enemy that doesn't really do any damage but bombards your units with goo. It will randomly appear in enemy groups now.
Created a new mode select window to hopefully make it easier to navigate the in game modes/content.

Design the Ship story in game and test it.
Get the artwork finished for the cutscenes for prequel mode
Get all the voice acting work complete for prequel mode (message me if you are interested in VA work, I mostly need male actors but am looking for a female lead, if its successful I may voice the whole game)
Add more side quests and content to story mode.
Add alternate ending to Quintels Outpost where they move to a secret hangar (where the 1972 UFO is)
Add a mercenary to story mode who may or may not transfer from prequel mode depending on your in game actions, this just offers extra content and a bonus ending to the game which is my favorite ending.
Add MacReady to story mode via Quintels Outpost. MacReady will "retell" the player his story so you will control him, possibly alter the events of outpost #31 (mostly who survives), then it will explore what happens to him after the movie (based on the comic series) and eventually he will join you when you travel back to outpost 31 and "finish off" Blair (I had the unused artwork from before remember?)
Implement a "game history" type of mechanic where based on game progress and terminals hacked you can collect information about the entire story and view it in a gallery, this will also be good to find Gen Inc data on in game creatures and display concept art and stuff like that. I'm most likely going to have it as something optional, my initial idea was a terminal you access in story mode that contains a collection of all the data you have recovered over your save file. An alternative would be the use of an in game menu function which players could view at any point in any story.
Test the whole game and make sure it works and stuff like that (probably the most time consuming but fun challenge).

As well as help with voice acting (message me if interested) I need some help with a lag test. I have swapped KredEx's script that handled my passive skill system for a script by Neon Black. I believe this has greatly reduced in game lag and where as before I was getting as low as 11 frames per second I am now getting 55+ FPS> If anyone would be interested in testing their machines performance with the lag test (a very basic build of the game) please download it from the link below and leave a comment on this post about your performance. To view FPS play in windowed mode and press F2.

Thanks for your patience,
Richard.

Awesome, good to know your making so much progress, cant wait, keep up the good work! :)