Part 2 of the art story of PUNT. From a re-skin from the old design to a complete do over!

We continue our design adventure after I've first posted PUNT on ModDB. Most of you encouraged that we change the art style, and I felt like PUNT needed its own identity since a Blue Portals tie in was far from happening at that point. I also wanted to play on the idea of "the future that never was" (or retro futurism) scheme, but with PUNT how it was, it was hard to communicate it.

I first tried a reskin of the what was already made to save time on the project. Unfortunately, it really did not turn out so well. 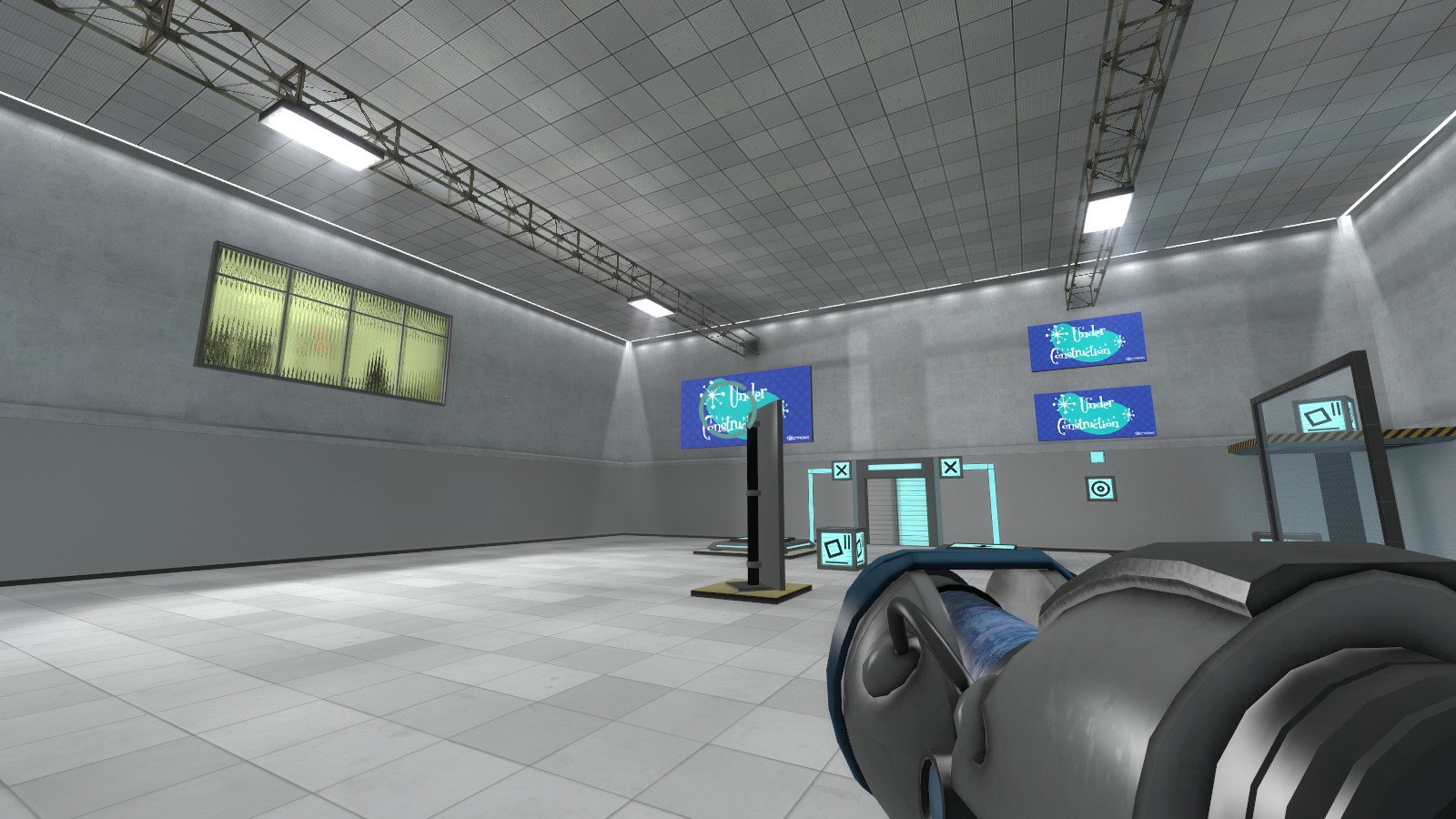 By looking at it, it just looks terrible! Not only does it look bad, there was no room for the retro futurism I was aiming for. The light rails on the top would also be a problem with the flip cube. Obviously, the new style would need to be done from scratch.

The pale colors of PUNT were decided and created by Colossal a while back, and I wanted to keep that. And a bigger plus, it went well with the late 50's - early 60's illustrations that I was practicing drawing. Keeping the colors was a must. A small test room was made, along with a few props, and this was the result.

What about props? Exit signs, doors, buttons, and other elements? Luckily, back in October, I went to Disney World, and I had photos of Tomorrowland which were a great help on designing props. 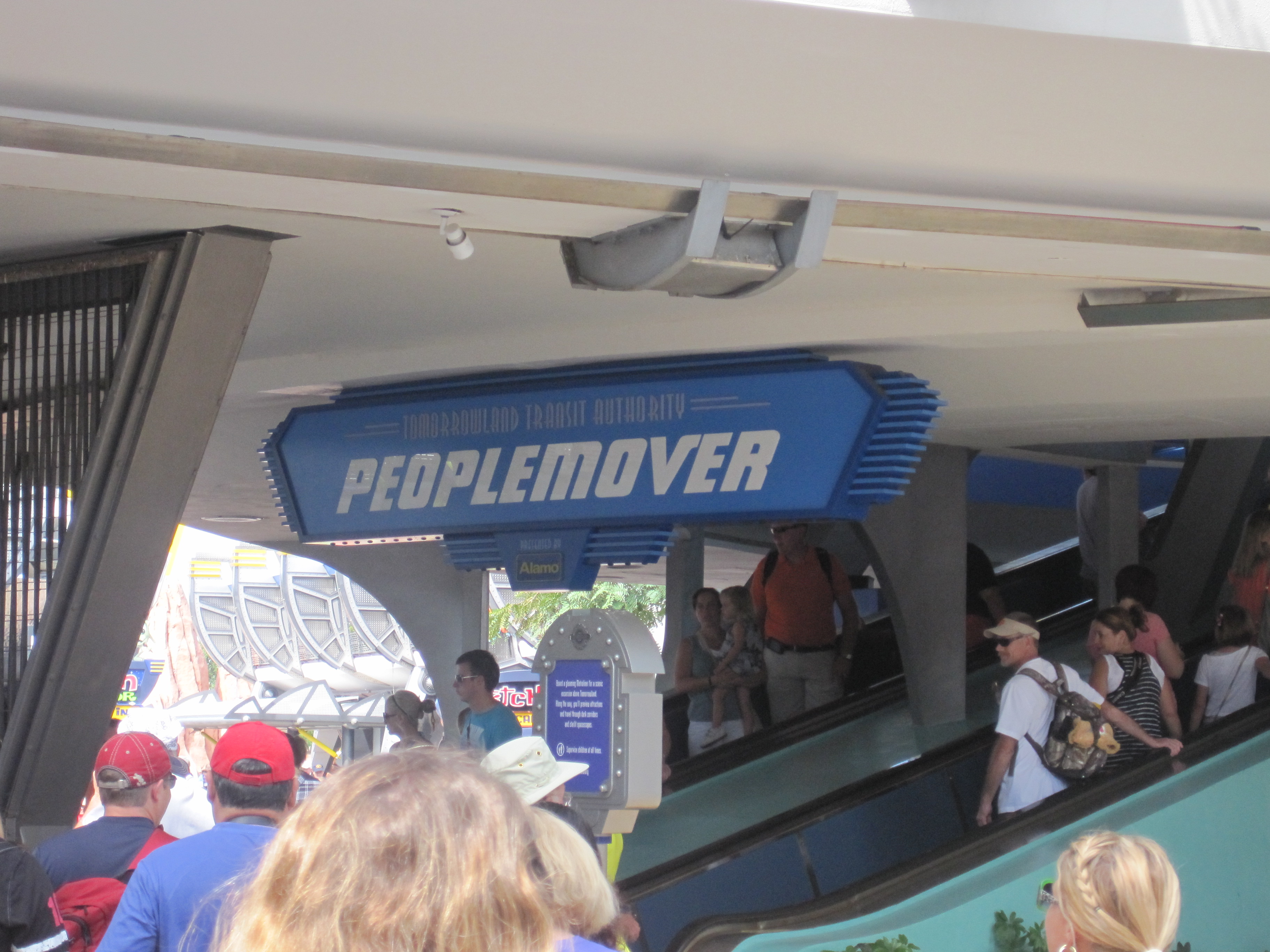 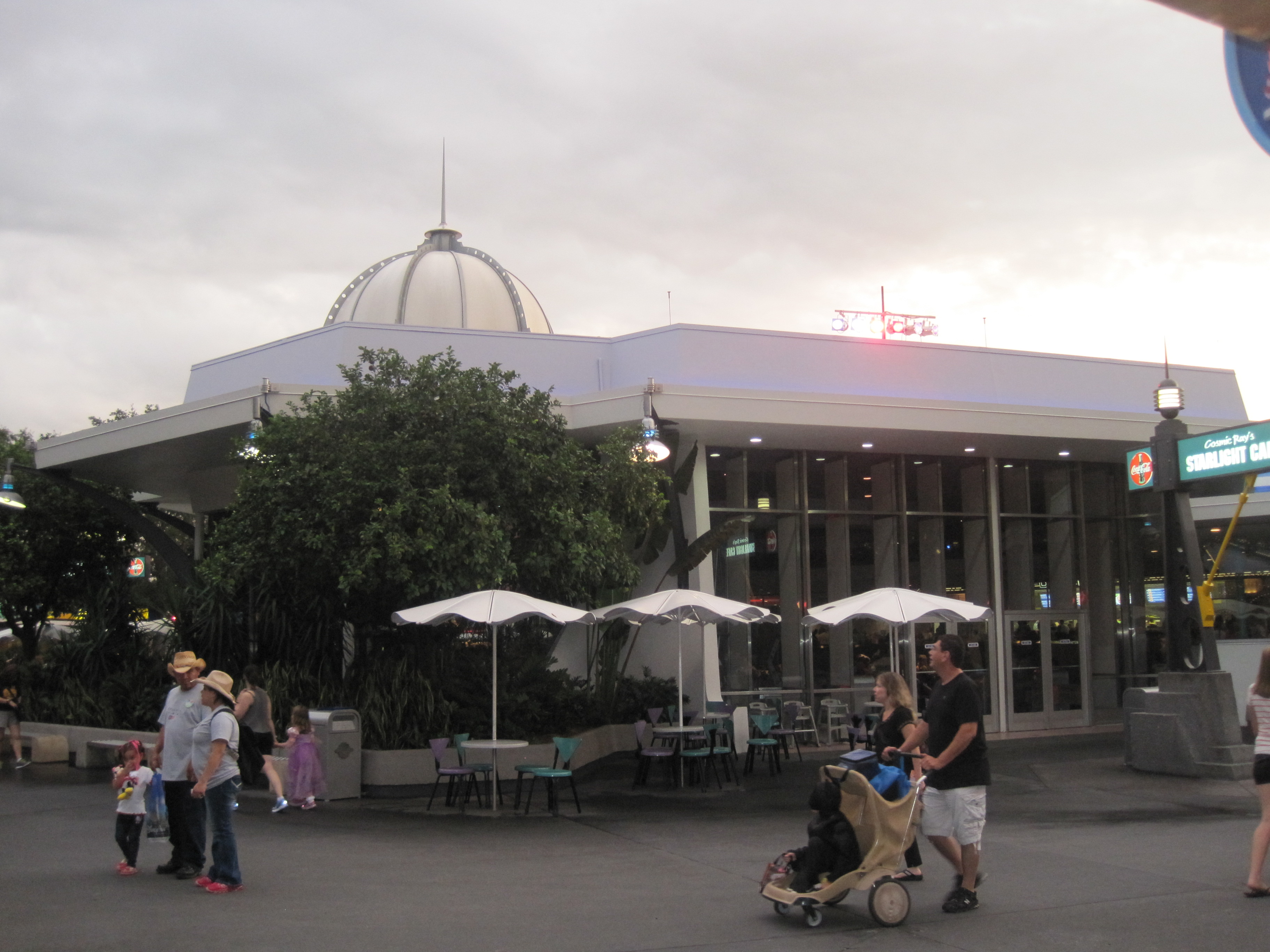 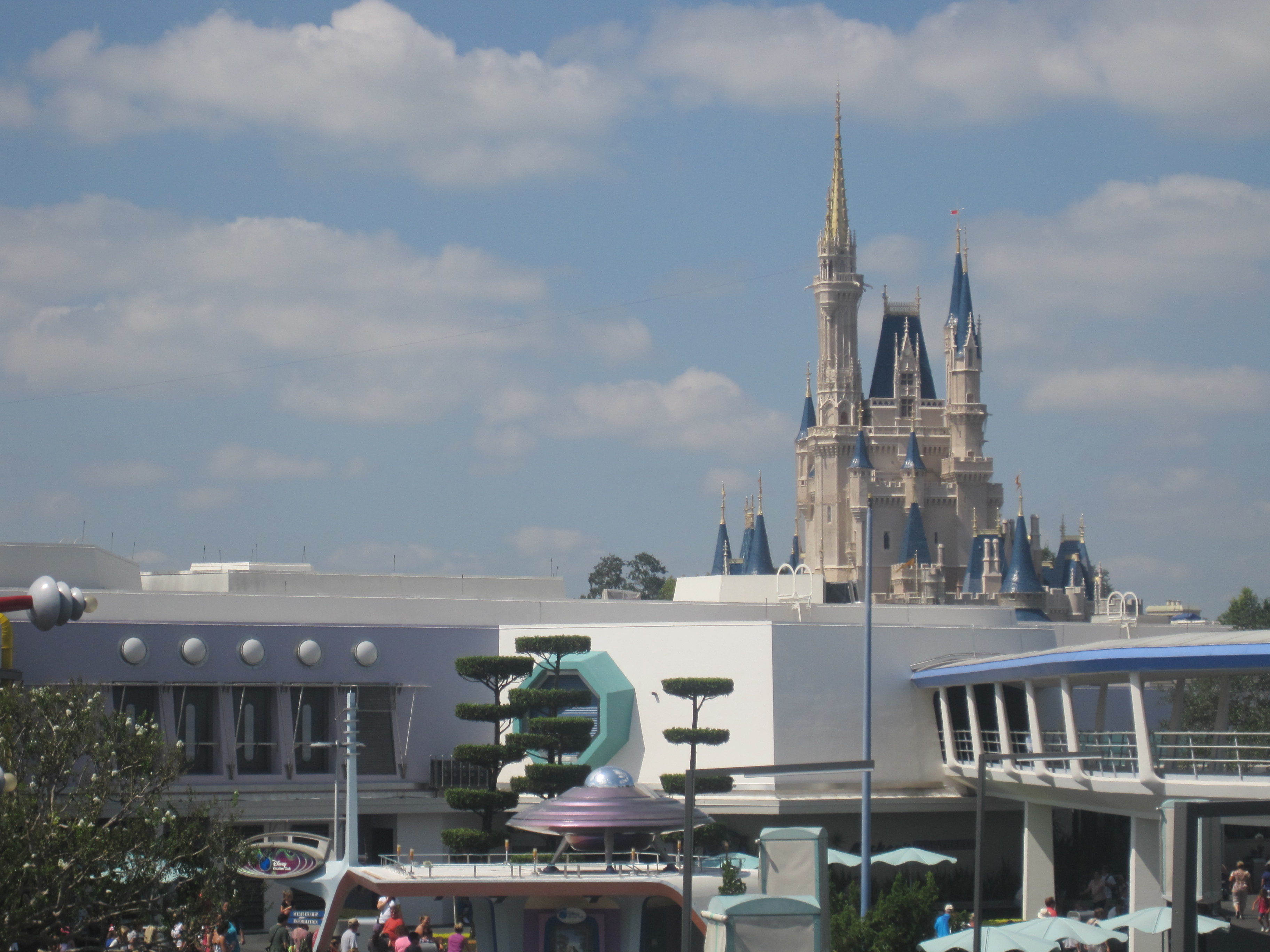 Tomorrowland In Walt Disney World has more of a Space theme going for it then retro futuristic idea of tomorrow, so I had to be careful on what to use as references. There was more silver and metal rather then the idea of plastic being this material being everywhere. It was really cool to use my own photos instead of Googling other people's shots!

A great deal of time was getting the style of it in props. The button model, door frame and the exit sign were done before any mapping was done. This was the first result.


It was a good start, but it looked cartoony, which was unintended. Instead of fighting with it to be more realistic, high quality textures, I just let it flow and went with it, and let it be cartoony. 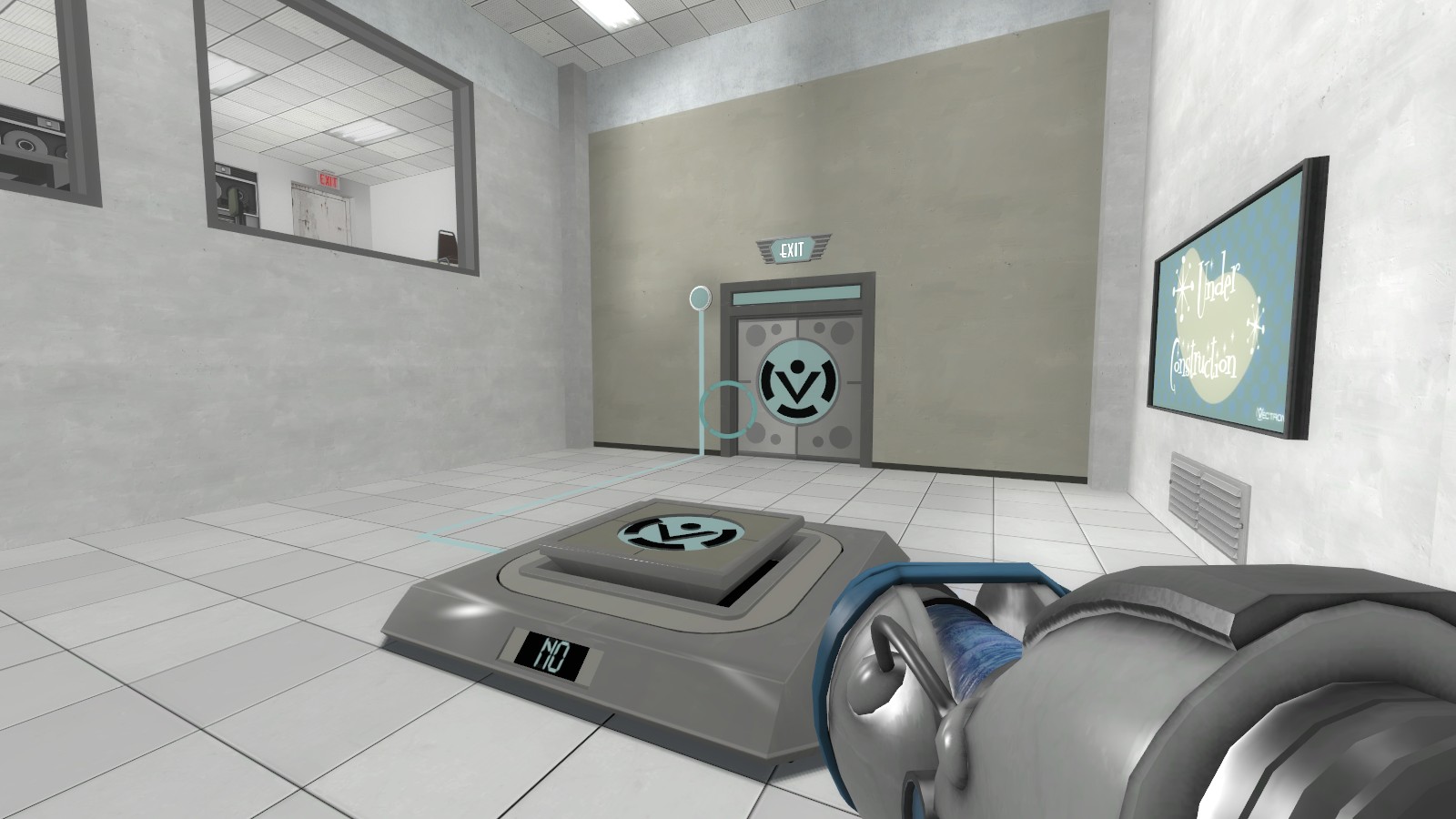 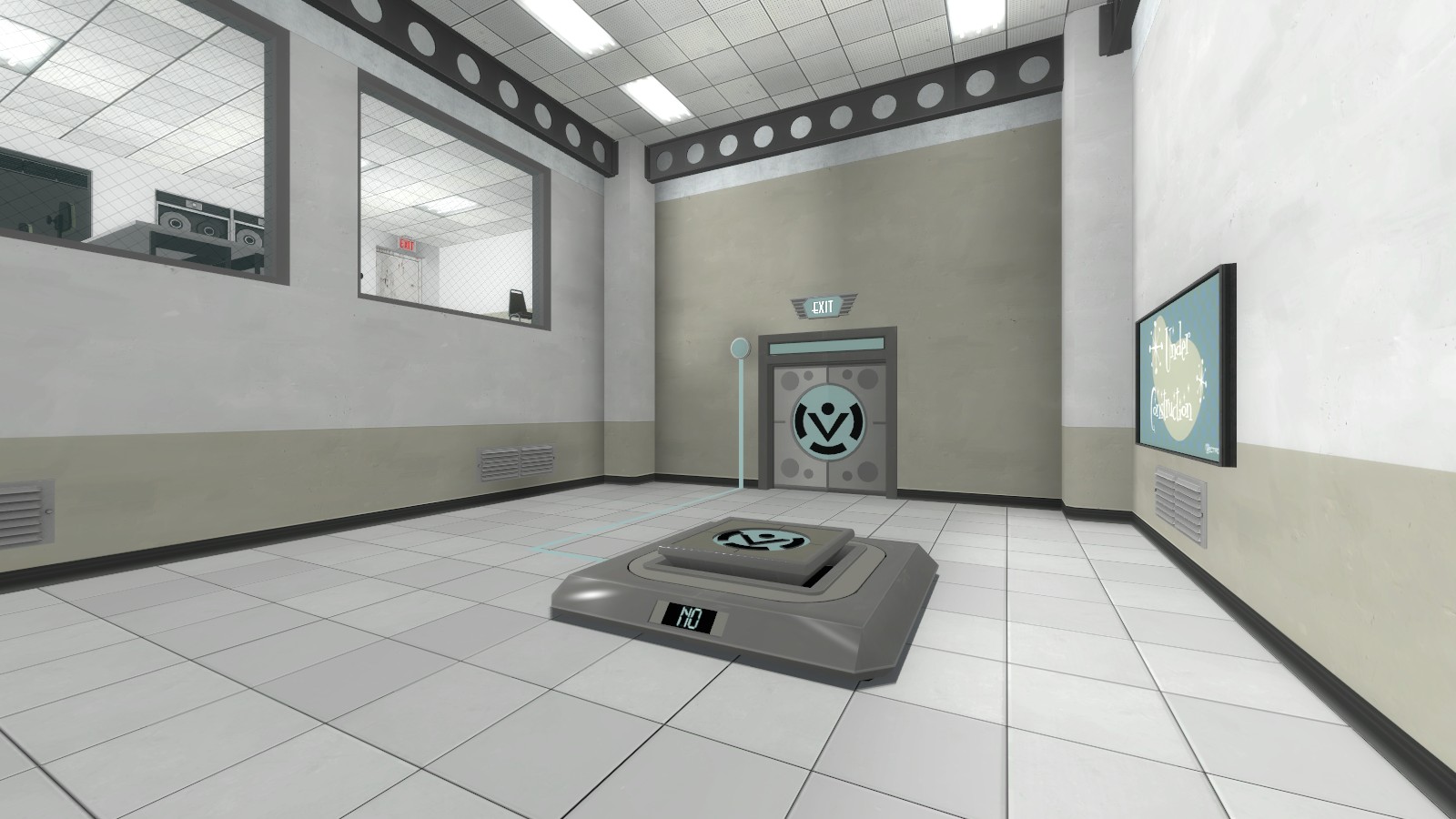 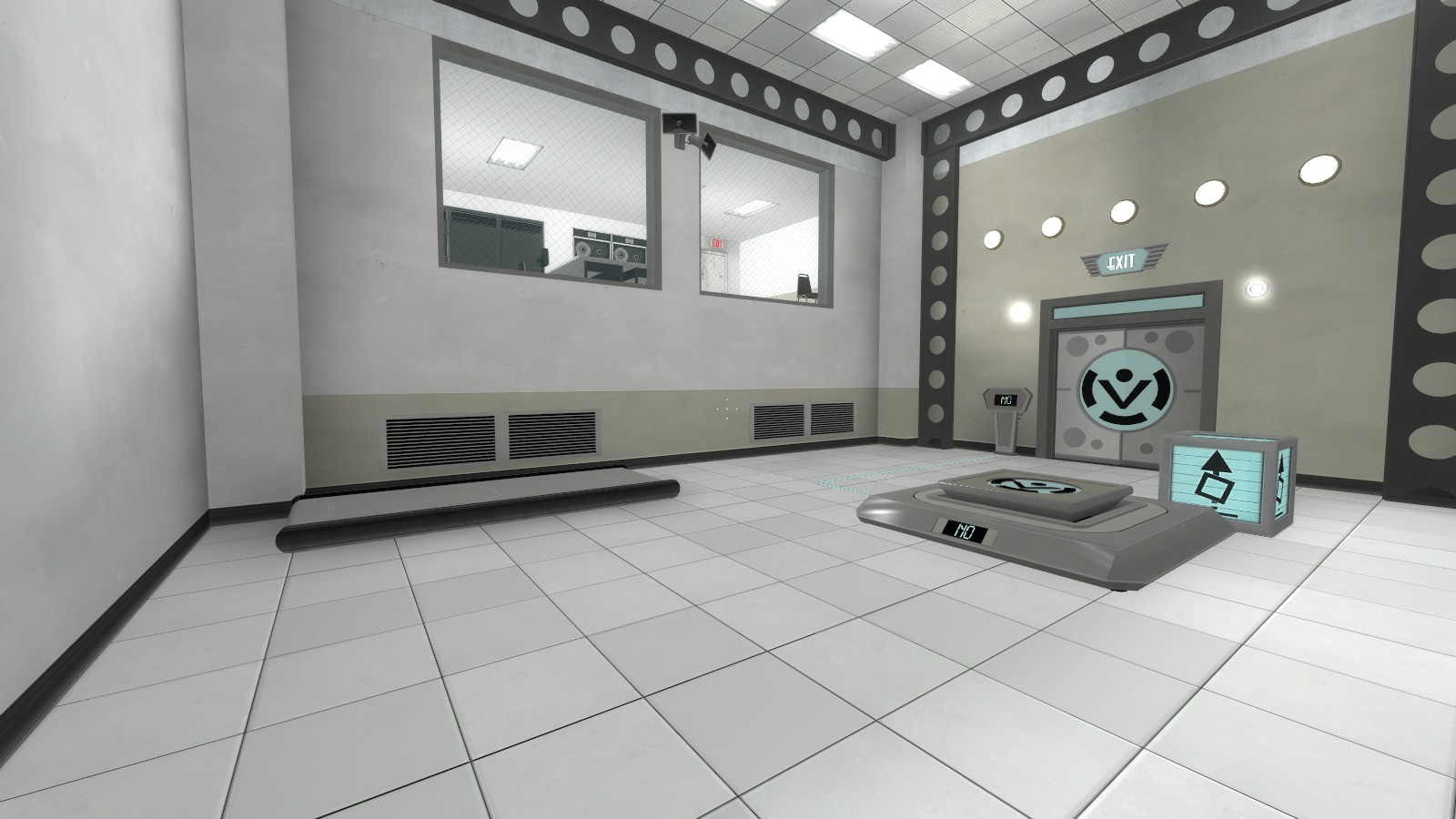 Then I broke away from this room to try to apply the style to a more complex area. 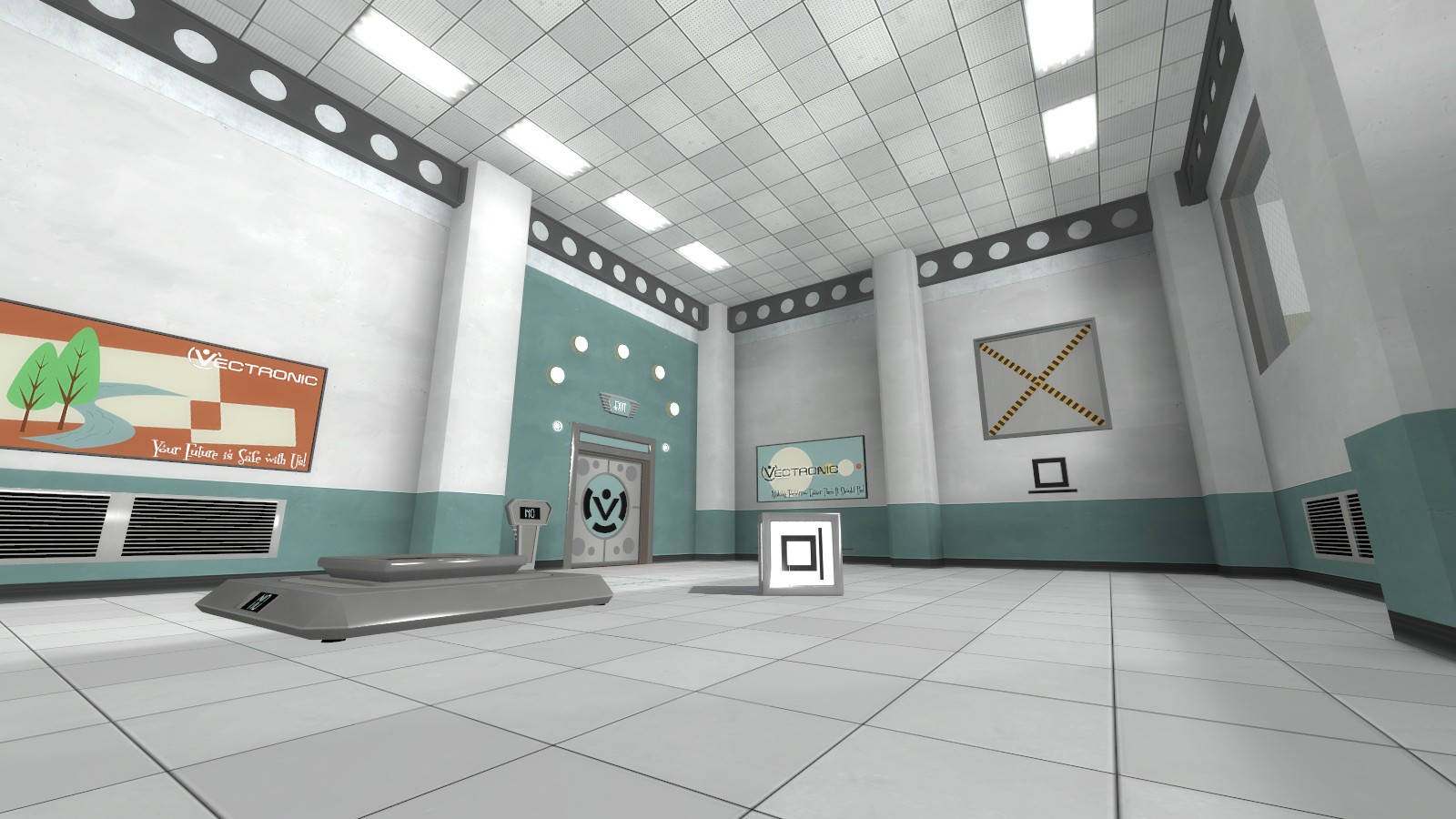 With a few tweaks here and there, and here it is. 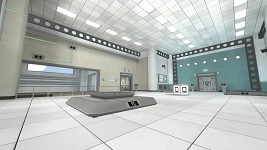 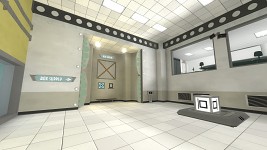 After a full month of developing, I can say that although it was fun to create something from the ground up, it is not fun remaking each puzzle by scratch! But in the end, A closer look at what was made so far, and if it is really necessary to be included can help.

Nice. It's now more different from Portal. Some of the signs look out of place but it's no biggie.

Now just be done with some of the levels and release something. You can do closed beta or open alpha to see how folks respond to the puzzles and gameplay style you have in mind before you start mass-production of the levels. I assume the plot allows the mod to be released even couple levels at a time if you must?

We're going to finish before we release. We don't want this to be another Blue Portals.

The signs are based off of the ones in Tomorrowland, but I do admit, they do look more art deco.

Just redoing the puzzles at the moment, there is no plans on releasing at the moment. We could release it a DLC at a time, but like Colossal said, we don't want it to be like Blue Portals, and have some ideas and DLCs never released.

DLC is actually a term more for commercial gaming where you pay for something that works on its own and you can get something extra, for free or for more money. While talking about DLC in mod project makes you sound professional, you have to keep in mind that the whole mod is, in fact, just downloadable content regardless on how you release it.

I have developed an indie puzzle game (among other things) myself and what I found out is that you can't really create them on your own, you need to have them playtested and ask feedback about if they really are as challenging, logical and fun as you intended. As you create a puzzle, you know the solution and have done it a hundred times by the time you release the game, and that makes it hard for you to try to imagine how a first timer would go about solving the problems. Sometimes you assume one step to be something different and it easily ruins the whole experience for the player in the end. I hope you are taking this into account at least in some way.

Thanks for the input. We are working on the intro a bit now, and we hope to be showcasing more of the mod.

Also, I get the term of DLC being bought content for a game. But in reality, you are downloading content for a mod. I guess the proper term is "addon". :)

Art from Tomorrowland? That's amazingly creative and to be honest I love it. I'm really more excited for this mod now.

You failed……………………to disappoint me. :-D
Looking really good and unique.