Good morning Zomboidateers. Today is an exciting day for the Indie Stone gang as Will, Mash, Chris and Andy have congregated deep in the industrial heart of North East England for the Super Huggy Awesome Zomboid Annual Meeting! (SHAZAM!). This is the point at which we actually get to see the pained expressions of our co-workers while we speak, rather than guess at them over Skype.

Good morning Zomboidateers. Today is an exciting day for the Indie Stone gang as Will, Mash, Chris and Andy have congregated deep in the industrial heart of North East England for the Super Huggy Awesome Zomboid Annual Meeting! (SHAZAM!). This is the point at which we actually get to see the pained expressions of our co-workers while we speak, rather than guess at them over Skype.

We're chinwagging about both business-y and gameplay-y stuff, so we thought it might be a good opportunity for us each to individually have a Mondoid chat about what we're up to in the background - as well as beavering away on the next actual update.

Hello! After an extended period in the PZ development hinterland I'm back in the writing saddle. Even though there's an awful lot of my work still in the can from yonks ago (the continuation of the Kate and Baldspot tutorial, NPC chit-chat and lots of people shouting 'Agh! Zombies!') the wishlist of extra material from the rest of the team is... extensive... to say the least.

For a start, there's the increasingly fully-fleshed metagame system that Chris will explain in his SHAZAM! summary. Now we have a firmer grip on exactly how long people generally survive in PZ, too, I am adapting the radio broadcasts I wrote right at the start of PZ (that were never implemented) to get more of a fix on the overall apocalypse timeline that you'll all be playing through. At one point I intend it that you'll have a range of radio stations and televisions to tune into daily while you play, each providing snippets of news-based panic - before everything goes ominously dead.

Beyond that, the existing work on the K&B script also needs an update - to teach new players about the fun stuff introduced in the recent 2.9 builds. Baldspot will now, for example, have to enter the next door house via a smashed window, distract a group of zombies away from his safehouse by shouting and smother his wife via a tooltip - rather than a slip of an archaic inventory system. I'll have a more detailed breakdown of what to expect in future Mondoids, but until then I'm just going to pass the mic over to Christoff...

Things are progressing splendidly with the meta-game system. We've made a few decisions about how development should be approached, and have decided in the short term at least, to leverage the power of a program called articy:draft to allow us to quickly develop flow charts that can be directly read in by the game.

The results have been exciting, and we now have a system that allows us to quickly define complex branching NPC scenes within the meta-game, with nodes such as 'WalkTo' and 'Say' and ways to determine how angry an NPC is or how tired they are. The beauty of this system is it doesn't require programming knowledge to implement scenes, as well as looking pretty to boot. To other indie devs out there, it comes highly recommended and we may write more on how it can be leveraged directly in your game at a later date.

Modders need not worry, as we fully intend to extend our own toolset to allow our own propriatry free system in the future, but speed and ease of finishing the meta-game and NPCs is of prime importance at the moment.

During our SHAZAM! we've discussed new dialogue that Will will (will) be writing up soon, adding a whole wealth of insults, chats and plotting to round up all elements of the meta-game functionality that doesn't have dialogue currently. Looking at the mountain of Will's dialogue that RingoD has scripted up, it's very exciting how quickly we should be able to get it in.

So in short, NPCs have dedicated 100% development time from three of the team, so it's very much on its way. As usual, no time-scale on when NPCs will be out there just yet, as it's still up in the air whether we'll release all of it together (Kate and Baldspot, fully functioning meta-game and NPCs all in one update) or do more iterative releases to get NPCs in there much sooner. There's little doubt that the presence of new NPCs would undoubtedly improve the game, even if incomplete. This is a topic for discussion as our SHAZAM! continues into the evening, but rest assured they are coming!

We talked a fair bit about West Point last update and there's still a fair old way to go before any of it will start appearing in-game. That said, we are approaching the point where the first map cells of the area will begin to be populated with buildings and details and so it is possible to show something of the area. Showing a sneak-peek is also a nice way to demonstrate the process of how map development works. 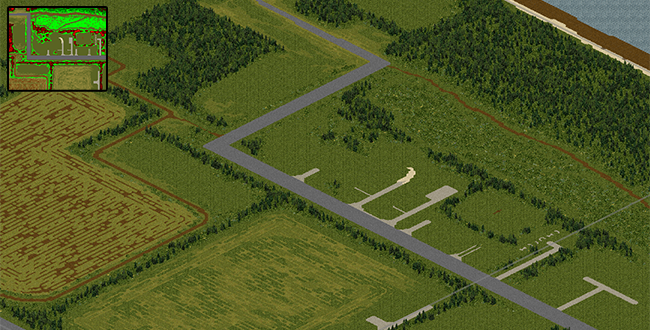 In the image above (click to get a full-size version) you can see the map as it appears in World-Ed using in-game tiles (look top-right! Woo! Water!). This is roughly how the map looks at the point it's handed over to Mash to populate (there's a bit more work required for the terrain and layout, but you get the idea). So from this, she'll add all the buildings, road markings, and all manner of other nice little details. In the top-left corner of the image, you can see a small region of the source image which produced this map area. The different colours in the source image represent different types of tile.

There are a few shades of red which indicate different densities of tree and foliage, bright green for grass, and various shades for the various terrain types. This means that it's significantly faster to produce large areas of map than it would be to place each and every tree, brush, flower, tuft of grass, etc individually on a tile-by-tile basis - which is the method we used to produce the original demo map.

Hello! As Captain Binky has been saying, West Point is starting to come together. As a small town, you can look forward to a franchise of your favourite chains (hello Spiffo's) as well as some new types of buildings. Why not take refuge in the safe confines of the Town Hall? Nothing can go wrong there! Or maybe stop by the manicurist and get your nails done. You've got to keep your priorities straight!

However, for things that are coming up a bit sooner than West Point, we've been working on a new tutorial/hint system for PZ before K&B return, with the aid of our lovely Community Raccoon Spiffo. He'll pop up during gameplay (of course you'll be able to shut this off) with appropriate tips such as "I see you're cooking some soup, would you like some help?"

...no, he'll just be demonstrating things NOT to do, with helpful illustrations! Here he is skipping merrily and fancy-free. 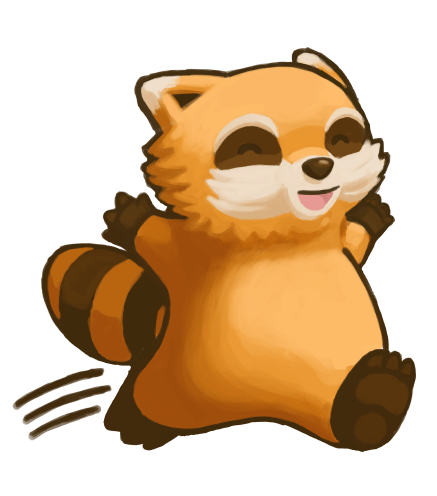 You can look forward to that in the next update, which will be out soon.

That's it for today's overview Mondoid! We'll be going more in-depth in these topics in the weeks to come! Oh, and the oft-mentioned forum revamp is being discussed back-stage too - we'll let you know when it's happening and the war against the kitchen-bots will finally be won.

Please hurry with the updates im tired of waiting :;O

The Zombie Horde waits for no one.

quiet, or they will eat your face.

You guys never cease to amaze me! There should be more devs like you guys!

He means there should be more developers like thse guys, that work hard and eventualy get the great updates out.

You must be doing something wrong.

Perhaps it could do something with 32/64bit system?

I run Windows 7 as well. Not sure if this would help, but you could read through this: Theindiestone.com

this i great cant wait

YAY! I can't wait! You guys are the best!

awesome, can't wait for next build!

Damn I love playing splitscreen with my friends I hope they fix out a couple of bugs when they have the time. Love the game keep kickin ***.