Frequently Asked Questions, Wallpapers and a Sneak Peak of a new unit!

Hello, and welcome to the second update of The Peloponnesian Wars Battle for Middle-earth II mod! This update will be less about flashy renders and more focused on giving you guys information in the form of a Question and Answer session, which you can browse below. Additionally, you can find our forums here, and we'll (read: I'll) be posting exclusive content both there and here at our Moddb profile. So check both to glean as much information as you want about the mod! Without further pause, let's get started with the update!

Q. What does "Peloponnesian" mean?
A. The word is derived from "Peloponnesos", which is the part of Greece where Athens and Sparta are located and thus was the primary theater of combat during both Wars.

Q. What is this mod about?
A. The primary objective of this mod is to create a Total-Conversion (TC) of BFME2, changing everything to a historical setting. The time period we're working with is the 5th Century BCE, when Athens and Sparta were duking it out over dominance of Greece.

Q. Awesome! Will it be like 300?
A. Not really, no. We're striving for historical accuracy first and foremost, but that film will be referenced now and again for Rule of Cool.

Q. Oh, okay. Um. Will Persia be a faction? 'Cause that would be great!
A. No, there will only be two playable factions: Athens and Sparta.

Q. Could Persia be a faction? Pretty please?
A. There are no plans in place to include more than the two factions, no. Two scratch-built factions is enough work as it is.

Q. How heavy will mythological elements play into things?
A. Not very heavily, but they'll be there. By that I mean that there won't be any avatars of the Greek pantheon wandering the field, but they will be represented in the Powers for both factions.

Q. How will the gameplay be different from normal BFME2?
A. Well, firstly, there's going to be a huge focus on infantry. That's how armies were built back then - the soldier of the day was the Hoplite, which was covered in an earlier update. Armies marched long distances and usually settled disagreements in short, bloody engagements with a large threat of danger to both sides. Naturally, warfare evolved drastically throughout the Peloponnesian Wars with the innovations of light infantry and distanced fighting, and we'll be doing our best to represent this.

Q, from {IRS}Athos. What changes do you intend to implement to the fortress expansion system?
A. That actually hasn't been discussed very heavily on it beyond its removal as-is, but it's still up for debate - at a later time.

Q, from Devon. What do you plan to do with Create-a-Hero?
A. So far as I'm aware, the current plan is for players to be able to create their own Captains (known as "Lochagos" in the mod) for either Athens or Sparta. However, that will be in the very far-off future once both factions are stabilized enough to allow that kind of thing.

Q. How will siege work?
A. Well, as we all know, the Greeks were the pioneers of siege machines (that didn't use gunpowder, anyway - that was more of a Chinese thing) so they'll have some pretty powerful toys at their disposal. However, they'll mostly be reserved for bringing down enemy structures as they weren't very powerful against infantry in reality. Additionally, Athens will likely be more prone to conducting a siege (or "turtling", which I'll elaborate on below).

Q. What about naval combat?
A. I can't say too much this early in production, but know that it will be /quite/ different from anything you're used to.

Q. How will Athens and Sparta be different?
A. Well, Athens is going to have a much more centralized, economy-minded role while Sparta will basically be running all over the battlefield burninating and the like. Athens will have a larger variety of units from the start, and likely have stronger buildings... and walkable walls! At first launch, both factions will have slightly-distorted mirrors of one another in terms of units: they'll both have Hoplites, Peltasts, Ekdromoi, and Lochagos available for use. The current plan is for the subsequent patches and new releases to include new units for both factions - which will be discussed in detail when the time comes ;).

Q, from Allathar. To what extent are you willing to sacrifice historical accuracy for the sake of gameplay? I.e. heroes that don't match up with the timeline, units, types of buildings, aestethic choices, etc.
A. The main divergence from the timeline is with heroes. Right now we've got Leonidas I, whom as we all know was a hero-king of Sparta during the Greco-Persian Wars. In history, he died at Thermopylae nearly 20 years before the First Peloponnesian War, but in this mod he'll be represented as the primary hero for Sparta. This decision was made based on his popularity with modern gamers and historians, both of which we're attempting to relate to (and are ourselves). Other factors, such as units, buildings and design motifs are as accurate as can be except in certain arguable stances - such as the popularity of Linothorax among Greek Hoplites, which didn't really come into vogue until Alexander the Great popularized it as the standard for the Macedonian military. So it did exist at the time, but wasn't as popular as we're representing it (which is being made for the sake of gameplay, yes).

Q. What are you doing about house colors?
A. Seeing as there's only the two factions, they'll have distinct enough "normal" colors so that won't be an issue. But if testing proves otherwise, we may consider doing something very subtle (helmet plumes or something).

Q. Who will Sparta's Ring Hero be? Undead Leonidas?!?!
A. The "Ring Hero" system is abolished. Forever.

Q. When will I be able to play this?
A. Hopefully as soon as possible. The team is composed of some very talented individuals who are producing new content almost every day, so a playable build shouldn't be too far off.

Q. How many releases will there be?
A. We're hoping to release patches fairly regularly once the initial launch is out and public, with things like new units, maps, and bug fixes. Lots of bug fixes.

Q. How can I help?
A. If you're wanting to join the team, we're always willing to accept help. Feel free to send me (mike_ on The 3rd Age, M!ke on Moddb) a PM if you're interested. That includes BETA-testing. If you're just wanting to support the mod - advertise! Tell your friends, your family! Spread the news to other forums and venues that we may not know about (and let me know about them!). Tell your dog! There's no such thing as bad advertising so far as I'm concerned.

As a bonus, here's the new splash image for the mod, which you can use as a wallpaper! Thanks to Matias from The 3rd Age (or Dorian_Gray on Moddb) for the excellent work.

Additionally, here's a teaser for the next update. 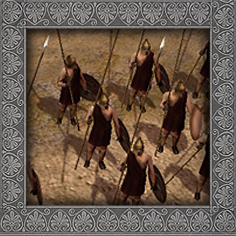 Thanks for reading, feel free to discuss this update and the mod in general below!