“...Far beyond the peaks he saw the burning fire reflecting to the dark clouds above, though the gleam was nothing more than the light of the falling sun. Soon, the moon would be his only solace in the growing darkness that would cover the land, and his everlasting journey for answers would continue.

Ridden with despair, the journey almost felt futile, for the loss of a true friend - only friend, made the man think twice again. Looking up to the darkening sky, he felt the faint snow falling on his face, and by then he knew that he had to go on. Reaching the towering peaks of the vast mountain range in the horizon was now his destination to reach alone. Rising up from the stone he was sitting, he took off towards the journey unknown, the faint light of the moon now guiding him on his path.

He came at last to the summit and down below opened the dismal view of the Great Gorge. The harsh, freezing wind was blowing hard and snow-blindness nearly had caught upon the man, but still he persisted onwards. No visible bridge was seen to cross the Gorge, but the man waited. Great secrets were hidden in this long forgotten place, he knew...”

"...far away, far beyond his reach lay the vast mountains he had sought for... 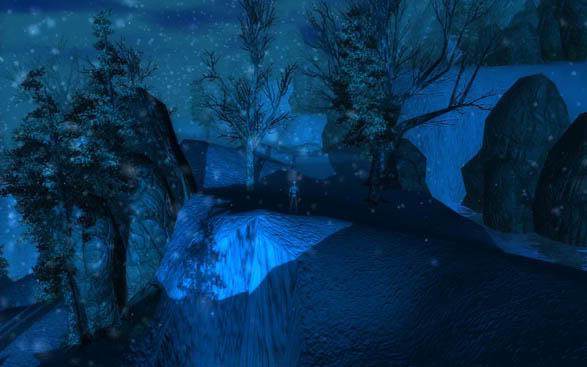 ...the Mountains of his own solitude..."

- “This is very good, high quality work. Honestly. ”
- “This is fantastic. This mod is shaping up to be one of the best I've ever encountered. Great work, guys!”
- “Very very good stuff. Really looking forward to this mod coming out! ”
- “I'm looking forward to this! When its ready i'll be reinstalling the game. PS. thanks for all your hard work and dedication to the project.”
- “Just got around to reinstalling Neverwinter Nights 2, had forgotten how pretty it was. Though, I must say, it pales in comparison to the screenshots you've been putting out for Moonlight Path!”

Comments and admiring like these are something I adore and take energy from, for it actually forces me to make something for the people who are waiting results from me. Also, I am been asked few interviews for both individual means as well as a indie gaming magazine and people from ModDB have asked me advices of how to start creating something of their own. It is outstanding and I really didn't expect something like this to happen. So, thank you friends, ModDB community and people involved in the project!

THE MOONLIGHT PATH – BETA NEWS :
The BETA takes place in a large city ruled by an Empress with high stature. The Player is tossed amidst complex political disputes, assassinations, ominous quests and intriguing characters alike.

It makes difference for quests, story, events and actions taken whether the player is male, female, good, evil, neutral. So in other words, the BETA will be a complex display of ways we can throw the PC around, make difference between simple things and make the playing experience more vivid and vigorous. Aspects like these also adds up for a lot for the replaying experience, of course if the differences are made interesting enough. But there is a lot to do, see and experience in the BETA and I am sure that it hardly leaves anyone cold.

Scripting: We have finally found enthusiastic coder to lend his aid at our disposal, so the actual, long-awaited vividness is about to be created for the BETA!
Sounds: Inserting sounds to each location and on designated points.

Music: Composing music for BETA starts from this moment on! We aim for about 8 pieces of music.

Key/plot Characters designed: 50+ of whom most are giving different assortment of quests, depending on PC's Alignment and Gender alike.

Quests: Around 30 Major Quests that include lots of sub-quests and all the individual side-quests, we will have more than 60-70 quests in total.

Areas designed, Indoor: 30 which works as temples. homes, sanctuaries, points of interest, local activity and more.
Areas designed, Outdoor: 3 in where are many designated points of interest, triggers and happenings as these three areas are City premises.
Playing Time: I would guess a rough 1-3 hours, if not even more, depending if the PC follows only the main plot or whether the PC does all the quests possible. When the true testing has been done, I will update the about correct playing time. 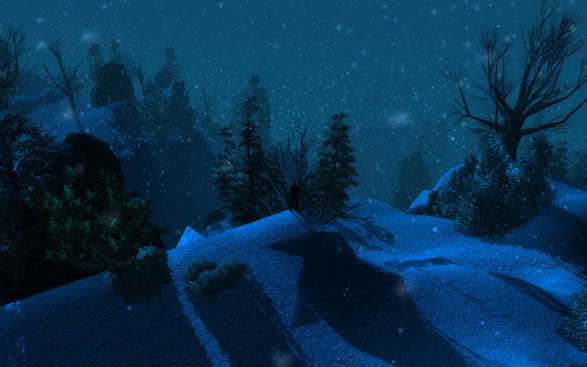 THE MOONLIGHT PATH – ALPHA NEWS
The ALPHA is another individual storyline set around a male character who is escaping his notorious reputation and away from the clutches of the ill-ridden Zhentarim. It has vital ties to the actual Moonlight Path storyline and is yet another prelude to the true story to unfold.
ALPHA contains probably a mere 1hour of gameplay but has an intense story, setting and atmosphere.

Further updates are coming along in time.

THE MOONLIGHT PATH – NEWS
The Moonlight Path adventure is pending while we focus on ALPHA and BETA tests.

That's beautiful, I'm gonna have to make some time for this.

Woo, I was quoted first! :D
I must admit, your writing is absolutely amazing. We all can certainly tell you have put a LOT of time and effort into this.

You've done excellent my friend, I wish you even more luck! ;)

nice I love it

Oh man, again a load of awesome comments and most cheering indeed, this only means I must work double-pace to get you people what you deserve!
Guess I can't sleep much, have to go to work and do the mod, so I welcome insomnia with outstretched hands...

I honestly CAN NOT wait for this to come out!
It's just so beautiful, i bet when you release this mod, the makers of NWN2 get a heart attack, 'cus this is a 100 times better then NWN2 has ever been :]