Following Part I on The Military Structure and Ranking System of Mordor, here is Part II of the article.

2.2 The Army: Heraldry and Orc Divisions

As has been said before, Sauron’s main force consisted of orcs, with separate divisions controlled by captains. Nevertheless, it must be noted that there might have beenpreferences within the army itself – in fact, some hints are given to us throughoutThe Lord of the Rings.

It seems quite clear that there is a distinction between Orcs serving under Sauron (the Red Eye) and those in the service of Minas Morgul. Once again, the basis for this argument comes from The Return of the King, in the chapter ‘The Tower of Cirith Ungol’. After the fighting in the tower, a dialogue ensues between Shagrat and another orc, Snaga –

Shagrat: “You must go … news must get through to Lugbûrz.”

Snaga: “You won’t be captain long when they hear about all these goings-on. I’ve fought for the Tower against those stinking Morgul-rats …”

Apart from the fact that “captain” provides once more a clear indication of Shagrat’s rank, the above quote also indicates a possible outbreak within Mordor itself. Who are “those stinking Morgul-rats”? – almost definitely, the other order of orcs coming from Minas Morgul.

It comes as no surprise, therefore that these two varying orc divisions fought between each other; but why “fought for the Tower”?

Most probably the “Tower” is Lugbûrz (unless it’s Cirith Ungol), but the way Snaga says such phrase seems to indicate that a feud broke out between the Dark Tower and Minas Morgul. Perhaps, not between Sauron and the Nazgûl, but rather between the orcs themselves.

Whatever the reason, there is little doubt about the Orcs of the Red Eye being preferred than other orcs. Indeed, the embassy that came out of the Black Gate with the Mouth of Sauron, was

“a small company of black-harnessed soldiery and a single banner, black but bearing on it in red the Evil Eye.”

– The Lord of the Rings: The Return of the King, Book 5, ChapterX

So here we are presented with another point where the banner of the Red Eye is present. As to whether this company was comprised of Men or Orcs (or both), we cannot tell. Though, we can clearly come to the conclusion that since the Lieutenant of Barad-dûr (a high ranking servant of Sauron) comes bearing this banner, clearly indicates that such order was superior than that of Minas Morgul.

After all, the symbol of the Red Eye is a direct reference to the Dark Lord himself.

We know that another order, that of Minas Morgul, actually existed due to the description of the armour the orcs wore when they marched out against Minas Tirith; consisting of a “moon disfigured with a ghastly face of death” (The Lord of the Rings: The Return of the King, Book 6, Chapter I).

Till now we have focused on Mordor’s army as divided in 3 orders – Uruks of Mordor,Orcs of the Red Eye and Morgul Orcs. There seems to be nothing concrete written by Tolkien whether other orc divisions existed – but the above three still provide a fairly stable ground to work on.

Of course there were other creatures apart from orcs – wargs, trolls, winged beasts and more. Orcs, however, were the backbone of the army, whilst the other races could have been auxiliary troops.

Most of the men at the service of Mordor are known to have been mostly Haradrim, Easterlings, Corsairs of Umbar and Variags of Khand (who were present at the Battle of the Pelennor Fields during the War of the Ring). Though they were part of Mordor’s army, they can be categorised as allies and therefore, do not occupy any specific position with the ranking system.

However, their service would undoubtedly have greatly affected the strength and power of Sauron’s forces and thus, they might have been given a status of some sort (which is the reason why I have included them in the ranking tree – below).

In a land as big as Mordor, with vast armies and complex military structures, it seems fairly obvious that the Dark Lord would have applied a system of getting messages through his servants and gathering vital information using spies.

From what has been discussed in Part I regarding Grishnákh, one can immediately realise that Sauron used messengers on a frequent basis – in this case, he used Grishnákh 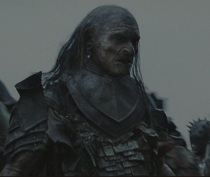 to gather information on the captured hobbits and the One Ring.

Since we’re also talking about ranks, the Dark Lord would have mainly used different breeds of orcs to carry messages.

Primarily, he employed the use of the snaga (slave) – smaller in stature than the average orc (though Grishnákh clearly wasn’t one of them).

An example of this can be found in The Two Towers, ‘The Choices of Master Samwise’ in the dialogue between Shagrat and Snaga (“Snaga” being not only his name, but also his type of breed – as we are later told that he was a “smaller orc”).

Their conversation has been cited above, Shagrat telling Snaga that he must take the news of the raided tower to Lugbûrz. 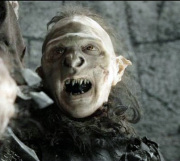 The snaga would certainly have served Sauron’s purposes of sending and retrieving information quickly and efficiently.

There is only one small passage in The Lord of the Rings where we are presented with a new type of task overseen by orcs: tracking.

In the chapter, ‘The Land of Shadow’ in The Return of the King, an orc hunting for Frodo and Sam’s trail, was said to have been “of a small breed, black-skinned … evidently a tracker of some kind”. 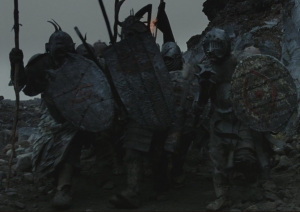 In occupying the role of trackers, there may have possibly been other kinds of smaller orcs apart from the snaga, which could be used to quickly dispatch and hunt down any enemy spies within Mordor; “No good wearing my nose out on stones anymore. There’s not a trace left, I say. I’ve lost the scent” (The Lord of the Rings: The Return of the King, Book 6, Chapter II).

So trackers may easily be considered as hunters. Clearly skilled in searching for any signs of enemy interference or infiltration within the land of Mordor.

There is no specific reference to any orcs occupying the role of spies – though, no doubt the Dark Lord would have used them extensively (be they orcs or others) to watch over enemy movements and gather information.

At the same time, this task could easily have been assigned to either the orc trackers or messengers.

There is no question that Sauron used slaves to supply provisions and food for his massive armies.

These wouldn’t have had any rank whatsoever, but were doomed to work hard for their own survival:

“Neither he [Sam] nor Frodo knew anything of the great slave–worked fields away south in this wide realm, … by the dark sad waters of Lake Núrnen;”

– The Lord of the Rings: The Return of the King, Book 6, Chapter II

Something curious and quite interesting, is a quote taken once again from the chapter, ‘The Land of Shadow’, between the above-mentioned tracker and an Uruk. 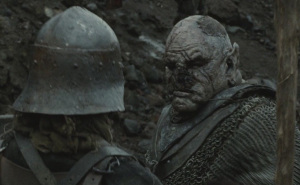 “ ’I’ll give your name and number to the Nazgûl’, said the soldier lowering his voice to a hiss.’ ”

Could it be that Sauron assigned a number to each of his servants for better organisation and more efficient communication between his armies?

Then again, would orcs (and uruks) have been of sufficient intelligence to know their own or others’ rank numbers? Still, clearly high-ranking captains (such as this Uruk) may have been aware of the different “codes” used by the lower orcs, to carry out these reports.

What is certain is that there is more beneath the surface of the pages of The Lord of the Rings than meets the eye.

Hopefully, this article has provided you with some information on how Mordor may have been structured and cunningly organised at the time of the War of the Ring.

Once again, these are my own ideas and interpretations, in trying to understand what Tolkien may have wanted to convey when writing The Lord of the Rings.

Finally, I give here a rough illustration representing Mordor’s military and ranking structure. 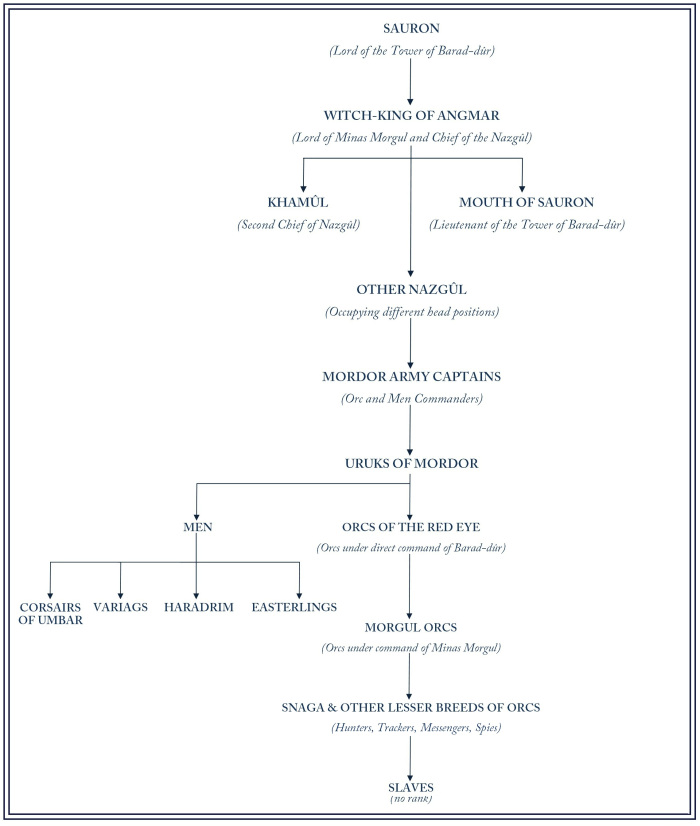 I am happy to help.